Steven Furtick - You Can't Let Others Control You 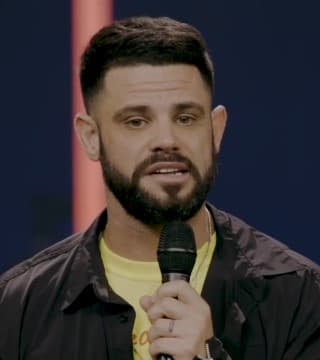 There is no worse feeling than that of invisibility. When you are doing your very best and it goes unrecognized, it makes it harder to want to keep doing it. When you feel unseen, especially by the people whose attention and approval you crave the most, it can create a compulsion in your life to start doing things that are not even really consistent with your character in order to receive from people a confirmation that can be taken away just as easily as it was given. But we are not citizens of this kingdom which celebrates and compliments all of the things that are seen; we are citizens of the kingdom where Jesus says things like this: "When you do something in secret, your Father sees it, and he will reward you according to what he sees".

So, my message is… if you have felt unappreciated, uncelebrated, unnoticed, and insignificant, in this kingdom, what is unseen is often what is most significant. Now, not in the world. In the world, we correlate seen with significant, but I'll tell you what. You could take this pulpit away, and I could still preach my sermon, because I really don't need my notes. They're just like Linus' blanket. It's like a security thing for me. I really have the message in my heart. So you could take this away, and I could still preach, but if the signal that's causing this microphone to make a sound were to drop out, you could no longer hear the message. Why? Because what is invisible is often what is most valuable.

Whether we will admit it or not, we are so good at celebrating the wrong stuff. People will always, especially the crowd… "Give us Barabbas"! The crowd will always celebrate the wrong thing. People will always celebrate what they can see. Another thing people will always do is celebrate a gift rather than celebrating character. We celebrate the wrong stuff. Now, if you do it in secret (and this could refer to anything in your life)… If you do what you do according to your values, not according to external validation, then you understand the meaning of "The Father saw". The sacrifices you made that no one else really pointed out, the stuff nobody gave you a trophy for… What would it be like this year for us to live with God as our audience and not our dysfunctional friends and family members, who are secretly so caught up in their own crap they can't celebrate us because they're waiting for us to celebrate them?

I struggle with this, because it's hard for me to live my life for an invisible audience. They used to sing a song in the children's church where I grew up that said, "Be careful little eyes what you see". Did y'all have this song in children's church? "Be careful little ears what you hear". It's the creepiest children's Bible song ever. "For the Father up above is looking down with love". It's like, "This doesn't feel very loving; this feels invasive". Do you remember the song, "Every Breath You Take"? "Every breath you take, I'll be watching you". The beat was so good to the song I didn't realize it's a stalker. He said, "Your Father who sees what is done in secret will reward you". For everybody who was not appreciated, for everybody who was not celebrated, for everybody who was unwanted, even abandoned, I want you to know your Father saw who left you. He saw who should have been there.

When my father and mother forsake me, then the Lord will take me up. My Father saw! When people mistreated me and I could have gotten even but I put it in his hands, he saw it, and my reward is with the Lord! So, how good are you at celebrating the unseen? Do you celebrate those moments in your life where God is making you stronger but your biceps aren't getting bigger? People will celebrate your biceps. "Oh man! You got tickets? You're going to need a ticket to the gun show". People have fifty thousand clichés to compliment your body, because people celebrate what they see. Nobody ever came up to me and said, "Hey, man. Your contentment is, like, gains, bro". We all know which is more valuable, but we live in a world where what is visible is celebrated more than what's valuable.

If you move toward the clap of the crowd, they will lead you right off the cliff. I'm going to stop right here, but you see the illustration. If I keep following that clap, where am I going to end up? If you keep chasing clout right now, what's it going to be like when the people you live to please are no longer even paying attention? Your friend might move to Alabama. Now the person who was your whole sole source for affirmation is gone to another nation…I mean, state. The Lord said to tell you that he saw it. Now, we don't need to be afraid. This is not a verse about retribution. "Your Father who sees what is done in secret". Some people hear that like a threat. When I said, "Your Father sees what is done in secret", you were like, "O God! Oh no. That's the worst news I've heard all day". He's not speaking about punishment; he's speaking about reward. He's trying to get us to see that we're seen, whether people do or not. "Okay, I get it, Pastor. He sees me. I get it". Do you really? Or are you still buying stuff? Are you still giving away things?

One thing I have learned is we don't graduate from our need to be approved by people when we graduate high school. We still live for approval; it just gets more expensive. When God gave me this message, he said, "Call it The Father Saw, because they thought nobody saw, but I did". Since you can't see the Father visibly or hear the Father audibly, I want to deliver the message today that he saw. He saw what you didn't get. He saw that integrity you had. He saw when you didn't go off. Now, Wednesday you did, but then Thursday you got it together and you didn't do it again. See, we have to celebrate the times where we do get it right. I'm bad at this. Stand up if you're like me and you have a hard time celebrating your successes.

All right. Let's take a moment, since we're so hard on ourselves and we have a hard time celebrating ourselves, at every location, let's celebrate the fact that we had the self-awareness to stand up and know that we're hard on ourselves. See how weak that was? You're like, "I'm not clapping for that". Sit down. I have to work on y'all for a minute. We are so bad at this. Holly and I went on a hike to Crowders Mountain Friday, and while I was busy beating the imaginary opponent to the top of the hill… I was 30 steps ahead of her, and she was looking at the view. I said, "You need to keep up". She said, "You need to slow down. The view is getting good". I was like, "I know it". But she was talking about the landscape.

I realized it was an analogy for what she brings to my life that is so irreplaceable. Holly is great at celebrating herself. She really is. She does not need lessons in this. She came downstairs the other day celebrating her workouts, that she had made it to a certain point in her workouts. I'm the kind of person… I'll do the workout and then think about the fact that somebody else could have lifted more. I'll just do this all the time. Really. I struggle to celebrate myself. And I used to think that was godly, because after all, the Bible says, "Humble yourself in the sight of the Lord".

Do you notice people who quote that verse are never really that humble, and they don't even know what verse it is? Next time somebody quotes a Bible verse at you to beat you over the head with it, ask them what chapter and verse. There's a 99 percent chance they'll shut up. I'm not talking about pride; I'm talking about process and progress and being able to say in certain moments of your life, "Nobody else saw it, but the Father saw". Otherwise, you're going to be waiting for people to give you trophies that don't even exist. Oh, by the way, if they gave the trophy, they can take it back. They can change their mind about you.

So I have to get calibrated. I feel anointed to preach today. I feel anointed to get us set free. Watch this. We talk about getting set free from sin and shame. We need to get set free from people. Not that we don't care about them, but we can't be controlled by them. I can't even let you control this message, because what if the best thing I say is the thing you're not ready to hear? What if you don't like the taste of the medicine? I have to mash it up in the applesauce and give it to you anyway, because I cannot be controlled by a crowd and deliver God's Word. You cannot be controlled by a cultural ideal of success and really receive the affirmation that comes from God alone.

The Father saw. He saw the tears you cried while you were waiting because you wouldn't compromise just to fit in. The Father saw. So, when we celebrate the unseen… Write that down on your page: "Celebrate the unseen", because what is most seen is not always what's most significant. You know the Devil can't defeat you, right? He's a defeated foe. Now, if it were you against him, it would be like Conor McGregor. It would be over in 40 seconds. Did y'all see that? I need my money back. That was $60 for 40 seconds of fighting. If I do the math on that (and I can't do it off the top of my head), that's a very expensive dose of violence that I purchased last night on the UFC fight. (If you don't know what I'm talking about, don't worry; I was praying.)

When we say that the Devil is doing this and that in our life… There are only two things he can do. He can't defeat you. The cross of Jesus Christ defeated the Devil once and for all. He is a defeated foe. You don't run from him; he runs from you. You resist him and he flees. But, and this is really important, because this is where it happens… Before I take you over into this next section of the teaching, understand that since he can't defeat you, he will always try to distract you or discourage you. Because he can't defeat you, because greater is he who is in you than he who is in the world.

Now, he can't defeat you, but he can distract you with what others are doing. He could distract me, as a pastor, with how other churches reach people. He could distract me, as a man, with how other parents are raising their family. Certainly, I can learn from that, but if I get so distracted by how you're doing it, I might miss the uniqueness of how God made me to do it, and then I become discouraged, distracted and discouraged. He wants to distract you so you crash or discourage you so you quit. This message finds many of us distracted and discouraged. When we come to this point, it is the revelation that the Father saw that enables us to get our focus back.