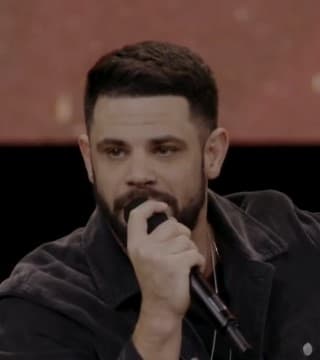 Are you trying to build your life by the wrong picture of what you thought it would be or what you think you're supposed to be? Wouldn't it be dumb to try to buy a puzzle to build it according to a picture that was on the cover of somebody else's puzzle? Try it. If you go over to a friend's house and they have a puzzle… This analogy is a little weak, but bear with me. If you see a picture… Go buy a puzzle that doesn't match the picture and try to open that box with those pieces and build a picture and see how much fun you have with it. God says, "I gave you the pieces for the picture I have in mind for your life, according to my purpose, before you were ever born".

So, I have the right pieces. I have the right gifts. I have the right temperament, if I submit it to the Holy Spirit and don't let it get out of control. "But this isn't what I pictured". Switch the picture! When you have a picture of yourself as worthless, you will build your life according to that picture. You will sabotage yourself, because you build by what you feel. God says I'm righteous. If I switch the picture to what he sees, and if I assume that he's always working, if I switch the picture… "Joseph, it's me. I started this. It's you who's going to take Mary home, but it's me". It's hard to believe it's God when it doesn't feel good. Joseph is like, "Um, are you sure"? He had to think about it. He had to ponder it.

There's a beautiful verse in the Bible. It says, "Joseph son of David, do not be afraid to take Mary home as your wife, because what is conceived in her is from the Holy Spirit". "What's in her is from me. It's in her, but it's from me". God says, "What's in you is from me". I'm comforted by that, because sometimes I feel pressure about what I perceive to be missing pieces. Even as a preacher, I always wish I could preach like other preachers I see. I'll tell you exactly who I want to preach like. You know the guys who stand still, and they are just so profound, and they have one of the mics that never moves? They're so calm, and I like that. I go on Amazon looking for robes, and I think, "Man, that would be cool", because all this moving around expends a lot of energy.

Even sometimes I come up and try to preach like one of them, but then something just… I can't. I mean, I really don't plan to freak out and spaz out, and I watch myself back, and I'm like, "Why do you have to be like that? Why can't you be dignified"? But something inside of me… When I start doing it, I just have to do it how I do it. I have to do it like the pieces in my box are meant for the picture. What's in you is from God. What's in me is from him. I have every piece. I have wisdom. I have strength. I have anointing. I have authority in the name of Jesus to overcome every wicked thing that rises to oppose me. It's in you right now, and it's growing, and it's kicking, and it's meant to be. You're not missing anything. You have it all. You have every piece for the picture. "For in the beginning was the Word, and the Word was with God, and the Word was God".

Let me ask you a question. Let's take a vote. This is the first church vote that I remember in the history of Elevation Church, but let's be Baptists for the next 30 seconds. Who had the harder job: Mary or Joseph? Before you answer this, because in just a moment I'm going to call on you to raise your hand at every location… If you are married, I want to strongly encourage you to consider carefully the cost of answering this question honestly. Who says Mary had the harder job? There they are…all of the women who have borne children into this world. Come on, let's celebrate Mother's Day early. Thank God for you. Amen. Raise your hand if you say it's Mary. She had very little choice. She was already pregnant by the time she found out about the purpose. Too late if you don't like it. Then you have Joseph.

Y'all, my kids came up to me the other day, and they said, "Do you know Jo"? Now here's what's hilarious. I said, "Jo mama", and they said, "How did you know that"? They think they started "Jo mama". "Boy, I was doing 'Jo mama' when your unframed form was not even in the picture yet". I gave him a genealogy of "Jo mama". I remember "Jo mama" from The Golden Girls. Do you remember The Golden Girls? "YouTube it. I promise you, 'Jo mama' is old. This didn't start with you". I came to say that to somebody about what God is doing in your life. This didn't start with you, and this doesn't end here. Joseph has in mind to walk away, but God has something different in store, because God is building with a different picture So, who believes Joseph had the harder job? Raise your hand. I applaud your courage. It's an unpopular stance. I kind of see where you're coming from. Verse 21 tells us Mary's job and Joseph's job. Let's read it together. Matthew 1:21: "She will give birth, and you are to give him the name".

Which one do you want to do: give birth or give the name? Physically, there's no argument, but what is striking to me about Joseph… You never heard the Christmas carol, "Joseph, did you know"? Mary knew. Mary knew because it was her body. Mary knew, "This has to be God", because she knew whether or not she had been with another man. (I'm going to leave it at that in case you didn't get your kids to eKidz this morning. I'm not going to give details on this.) Mary knew, "This has to be God, because I consulted my experience, and I'm a virgin. I haven't been with a man. So if I'm carrying something, it didn't come from human means. I know it, because it's my body".

Joseph didn't know, and he would never really know, so he had to believe. Maybe that's the hardest job of all: to believe what you can't see, to believe what you can't be sure of, to believe what you can't prove. Joseph said, "I never knew". The rest of his life he would live probably halfway wondering, "Was it really God who got her pregnant"? You go into men's group, and you're like, "Guys, it's good. I was praying. The Lord told me. I was actually sleeping. I was in a dream, and the Lord told me. Don't worry. Mary saw a vision too, and we're going to work this out, and we're going to go home". Do you not think Joseph spent the rest of his life looking cross-eyed at people, trying to figure out, "Now your nose looks kind of like…" Checking out those ears. "You know, Ronny has kind of long ears. I saw Ronny and Mary…"

Joseph didn't know, because faith does not operate by sensory knowledge, because faith enables us to understand that God is with us even if we do not see him in the picture. I need you to receive this by faith. "You are to give him the name Jesus, because he will save his people from their sins". Now, here's the culmination of the text that I want to share with you: "All this took place…" Everything you didn't picture, everything you don't understand. "All this took place to fulfill what the Lord had said through the prophet…" Then he quotes Isaiah 7:14, which says, "The virgin will be with child and give birth to a son, and they will call him Immanuel (which means 'God with us')".