Steven Furtick - Why Is This Taking So Long? 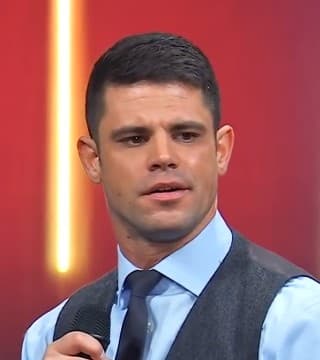 Find a young couple that has been trying to have a baby for three and a half years, struggling with infertility, and one of their couples friends they hang out with got pregnant on accident and is complaining about it. The frustration of unfruitfulness. Find a man who went to school for a certain trade and now is working in an industry that will barely provide for his family, and he's way overqualified for what he's doing. There's nothing more frustrating than feeling unfruitful.

Notice I said feeling unfruitful. I didn't say being unfruitful. The fact is some of the times in your life that feel the least fruitful and the most frustrating are actually the times in your life where God is preparing you and tilling you and cultivating your character for the greatest gifts he's going to give. Has anybody experienced this? See, it's the difference between being cut off and cut back. Now I want to preach, because somebody came into church today feeling cut off. You feel cut off from opportunities and cut off from potential and cut off from purpose, but what I want to tell you, like Holly told Elijah when we drove by those crape myrtles and it looked like that man quit caring about those plants, it looked like that man had lost his mind, it looked like that man had no good sense…

What Holly told Elijah is, "He cuts them back so they can grow back better than they ever did before, to get them ready for the next season". I came to tell somebody, "You're not cut off; you were just cut back". God wasn't cutting you down because he's done with you; he was cutting you back because he has something more in store. If it's cut back, that means it's coming back. Good measure, pressed down, shaken together, running over. It's coming back! My joy is coming back. My peace is coming back. Before church started, right when the choir was singing so beautifully, I got struck by a thought. I never do this, because I like to worship. I don't like to be preparing my sermon while I'm supposed to be worshiping. I'm supposed to have that done already. But the Lord hit me with something so strong I told Buck, "Go get a notebook. I need to write something down".

I found a Post-it note, and I wrote down, "Life may make the cut, but God is holding the scissors". I felt like if I would say that to somebody, it would change your perspective on the pain you're experiencing. All you can see is what people are doing to you. Snip, snip. All you can see is what the company did to you. Snip, snip. All you can see is what the disease is doing to your mom. Snip, snip. But if you can ever realize that no matter how life cuts you, it's God who controls your destiny… My Father is the gardener. He knows just where to cut, when to cut, how to cut to make it grow back better. Life may be cutting you, people may be cutting you, but God is superintending this process. It's just a cutback. I'm not cut off; I'm cut back. I might be down; I'm not out. I feel unfruitful, but though there is no fruit on the vine, no cattle in the stalls, I will rejoice.

Please believe me when I say I know the frustration of unfruitfulness. I know what it feels like when you put a lot into people and they let you down. I know what it feels like to be the person somebody put a lot in and let them down. (Nobody ever preaches about the other side of that, by the way.) I know the frustration of unfruitfulness. Yet in this beautiful passage of Scripture, John 15, which everybody in the church has memorized… Yeah, he said, "I'm working on it". In other words, this may take a while. He just proved my subject. Tell the person next to you, "This may take a while".

I don't even like the word while, because it's indefinite. While means while this is happening, that's happening. Well, I don't want to miss that, but I'm doing this. I don't like things to be happening while I'm doing something else. I don't like you to be posting something on Instagram while I'm trying to preach. While we're here, we're doing this. I don't like that very much. I especially don't like it when it refers to a period of time, because what does that mean? A while? Well, one time the writer of Hebrews was trying to encourage the Christians not to give up when they were persecuted, and he told them something in Hebrews 10, verse 37. "For, 'In just a little while, he who is coming will come and not delay.'" When? A little while.

But then the Bible also says in 2 Peter that a day to the Lord is like a thousand years, and a thousand years is like a day, so I'm not sure I'm very comfortable with God's definition of a while. If by a while you mean 15 minutes, we're good, but if by a while you mean 15 years, I'm not so sure about this. It's hard to commit to consistency when you have no frame of reference for the duration, yet we're all driven by a sense that destiny has deadlines, and I might be missing my season to bear fruit. I might be missing my season to make it happen. This might be the only chance I have to make a run at it. This might be my window of opportunity.

The great preacher Leonard Ravenhill said that the opportunity of a lifetime must be seized in the lifetime of the opportunity. What's he saying? You have to strike while the iron is hot. There's a window called while. While your kids are young, you have a very profound opportunity to be their parent, but after they hit a certain age… let's be honest… you're really nothing more than an advisor, at best. I only have a little while to do this. I only have a little while where I'm going to feel enough energy to preach three times a weekend full blast, so I have to do it while I can. I can't do it with my whole heart if I'm focused on a lot of things that aren't worth my while at all. Some of you are missing what you should be doing while you have the chance because you have your mind on stuff that's not worth your while.

Nehemiah, in the Old Testament, was overseeing a construction project to rebuild the walls of Jerusalem. He only had a little while to do it. He got special permission from the king, whom he had served as cupbearer, to go back and check out the situation. He had resources, he had time, but he only had so much. God is an unlimited resource. That's why Jesus is the vine. You are a limited resource. That's why you're the branch. You only have a while. The grass withers. The flowers fade. The days of man are like grass, here today, gone tomorrow. I only have a little while for this. I know it seems long, but it's really only a little while. It's just a little while.

I love Nehemiah, because he said, "Oh no". Sometimes you have to learn how to tell your enemy, "Oh no. Oh no, that's not worth my while". Watch Nehemiah. This is a master class on leadership, y'all. "So I sent messengers to them…" He didn't even have the conversation himself. "I'm not even having this conversation. This is not worth my while". He said, "I sent messengers to them with this reply: 'I am carrying on a great project…'" "I am building a great family. I am putting my all into getting this degree. I am restoring some stuff the Enemy stole. I am carrying on a great project. I'm in the middle of something important". "…and cannot go down. Why should the work stop while I leave it and go down to you"?

Some of you came off the wall for some stuff last year that wasn't worth your while, and while you were down off the wall, not laying bricks, the Enemy was laughing and life was passing. You spent 32 percent, roughly, of your mental energy having arguments with people who aren't even in your life anymore about what they did to you. You didn't have the focus to give. One time, King David was getting a report from one of his generals that his son, who had rebelled against him, had been successfully taken out. David was so upset about losing his son he couldn't celebrate the victory his men had given. The commander said something to him. He said, "You love those who hate you, and you hate those who love you".

Now come on, let's get back to building. Let's get back to construction. Let's get back to the great project God has called you to. Let's get back to what's worthwhile. What's really worthwhile? That's what I want to answer today. What's really worth your while? You can't be consistent at everything. We're in a series about challenging our inconsistencies, but the first thing to challenging our inconsistencies is to prune the things that shouldn't be a priority, because if there are too many branches in your life and there are too many pursuits, it's going to be sucking all the stuff that should be flowing somewhere else. If there are too many commitments, you won't be consistent in any of them. God says, "Like I prune you, I want you to prune your own life. I want you to prune your priorities. I want you to ask the question that even adults rarely stop to ask. 'Is this worthwhile?' To make decisions at a different level so you can keep commitments at a higher one".