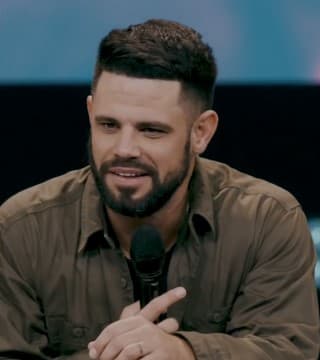 When you get stuck, you get stupid. I'm not saying you are stupid, but for me, some of the dumbest decisions I made was because I got sick of being stuck. "I'm going to just do something. Ah! I'm sick of this". You know, when you hit "send". "Oh no! Un-send! Un-send! Un-send! Un-send"! I might invent the "un-send" button. When you get stuck… Elijah came in our room the other night. This was Friday night, and we were both asleep. We were off-duty on parenting for the night. Our office hours are 7:00 a.m. to 5:00 p.m., and then it's off-duty. He comes in the room laughing, and we were both asleep. He's like, "You're not going to believe this". He's laughing. He had gym shorts, mesh Elevation Youth champion gym shorts, hanging from his braces. He's saying, "Get it off! Get it off"! I was going to, but I said, "First, let me get a video".

Have you ever been stuck in a memory? I'm stuck in a pattern. I'm stuck in a generational thing that started before I ever came to the planet. I'm stuck. I get stuck preparing these sermons. It's horrible. I'm not playing now. I know I've been showing you illegal footage of my children and everything in church. When I get to prepare these sermons, I get stuck. It's horrible, because the sticking point makes me want to just give up on everything I've worked on. Please don't think I'm preaching to you about preaching. That's too meta. I'm preaching to you about preaching because that's where I get stuck, and I figured you might get stuck sometimes too. When I go to prepare, it'll just be moments where none of it makes sense.

For everybody who's 40 and older, like, when you had antennas on the TV, and you could see the station but not fully because you were watching your neighbor's HBO… before you got saved, "BC". It's under the blood now. But it'll scramble, and I won't even know where to start. I'll be like, "I don't know what to say. I'm preaching about Moses coming through the Red Sea, and I already preached about that before. They already know they got through the Red Sea. Spoiler alert. It won't be interesting. So maybe I should start it with Abraham, because it's Abraham, Isaac, Jacob, and then Joseph went to Egypt, and he never meant to get trapped in Egypt. He went there to get food, but sometimes you get trapped where you went to get food, and sometimes the place where you go to survive is the place where you get stuck.

Maybe I should start there, but I already preached that a couple of weeks ago, and they probably remember that, because they come every week. They don't ever miss. Maybe I'll talk about the burning bush, because he went to the burning bush, and the bush was burning up but it wasn't burnt up. It was just burning, but it wasn't burnt up. Maybe that's like us. Sometimes the presence comes and our passion stays alive even though we go through stuff, and we burn but we don't burn up, and the proof of your presence is the fact that we're on fire, but we stay on fire even though we go through all kinds of hell. Maybe I should do that. I'll tell them about the bricks and the straw, and sometimes you have all the mud but you don't have the straw, so you have to go get your own straw. And you didn't have a dad, so you try to be a dad, and you don't have what you need to be what you're trying to be, and the Devil uses that as condemnation and tries to keep you stuck as a slave". Then after that I'm like, "Oh my god! I need a nap". I will just feel like, "I don't know where to preach this sermon on Sunday", and I'm stuck.

I get so stuck I don't want to say anything. How are you all doing? Praise the Lord. I figured you get stuck too, even if you don't preach sermons. I figured you go, "I've got to have this meeting at the kids' school, and I want to go down there and talk to the principal, because I don't think the principal is being fair to my kid, but I have to teach my kid that sometimes people aren't fair in life. Sometimes you have to let them go through things. Maybe they need to learn that". I figured you get stuck too sometimes. It's a sticking point. This is not the first time you've been stuck, and this is not the first time Moses was stuck, and that's the good thing about it. If he did it before… I just want to keep you breathing today, because I know you've been stuck.

Some of us are stuck in what we think we were supposed to be. We get stuck. You can get stuck in a season. Every time in fall I start to feel a little drained from the ministry of the year, and then depression can come in, because it's the same, same, same, same, same, same. Then everybody else in the church is feeling the same way, and I have to preach to y'all. I grew up in the Lowcountry of South Carolina. They used to take their trucks out on Friday night and get stuck on purpose. They called it muddin'. But I found out something. You don't get stuck in anything shallow. If you feel stuck, that means you're in the deep stuff. Maybe God is doing something deep in your life when you feel stuck. Maybe when you feel stuck you're building strength.

That's the only way you really build strength. It's to get to that sticking point, to get to that point where you can't push through. I used to have this spotter in high school. He would stand over me, and the moment I started to struggle, he would just lift the whole weight off of me. I thought, "Man, that's not a good spotter". That's not a good God, to never let you have any weight. That's not a good God, to never let you have any challenge. How would he grow your faith? No. See, a good spotter… You're on rep 11, 535 pounds. And I'm just a little stuck. God is standing over your life… I need you to know this. He sees where you're stuck, that sticking point, and he says, "I'm not going to take it off of you; I'm going to give you a lift".

Have you ever had God be your spotter? I declare the God of angel armies is standing over your life, and if you feel stuck, he will do what you cannot do! He is your strength! He knows how to get me past the point where I'm stuck. Now watch this. You may not like this. The first sticking point Moses encountered was not Pharaoh. The first sticking point Moses encountered, and maybe the greatest one, is that he tried to negotiate with God, and he got stuck. He got stuck at the burning bush before he got stuck at the Red Sea. God is like, "I chose you". He's already stuck tending sheep for his father-in-law, Jethro. He'd been doing that 40 years because he got mad at somebody and killed him, because when you get stuck you get stupid.

Now he's doing something that's a consequence of his decision. Then the Lord speaks to him. He's like, "I chose you. Go to Pharaoh and tell him, 'Let my people go,'" with the hand motions. Moses is stuck. You might be stuck in yourself. He said, "But behold, they will not believe me…" But you haven't even talked to them yet. "…or listen to my voice, for they will say, 'The Lord did not appear to you.'" Now there are two things about this that are wrong. First, it's on other people, and second, it's about a future event. You can't control either. So he's stuck, and he's stuck for good reason. It's because he knows himself. He knows Moses. You know you. To negotiate with God is usually like, "Nah, I'd better not try that".

I see this. I don't want to do a dating seminar, but I already did a negotiation seminar. When you ask her out on a date like, "I know you probably don't want to, but…" You have to have some confidence to it, man. Walk up to her like, "Hey, I didn't know if you wanted to go Tuesday or Wednesday". Come on, I'm helping you. Name your kid Larry. (That's my legal first name.) Moses is like, "I can't do this. I know me. I don't have it. I can't do it". He's stuck in a story about himself. Now, the bigger story does not revolve around you. Remember that. When we get stuck in ourselves, we miss the whole point. God is doing something that is bigger than you. It's bigger than what's wrong with you, it's bigger than what you didn't do, it's bigger than the time you wasted, and it's certainly bigger than the opinions of others.