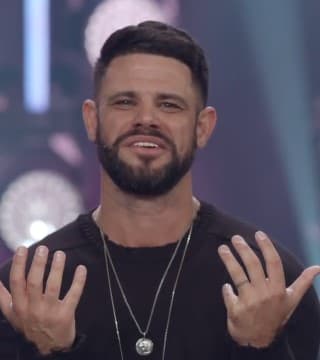 It's hard to let go of what you've been holding on to for so long, even if it's not working anymore. It's really hard to let go. It's like, "But this is how we're used to". He's going, "No, I beg you: see it differently. I beg you to let go". It's not normal; it's just old. Just because you're used to it doesn't make it normal. So, after he gets done telling them that there's a new way… That's what he opened by his blood. That's what he opened on the cross. That's what he opened along with his tomb. He opened a new and living way so you could be a living sacrifice. How does that even work? In order for something to be sacrificed it has to die. Right. The old way has to die for the new way to come alive, and that's what Paul is preaching in Romans.

Then comes the verse I really want us to sit with for a moment. In Romans 12:2, Paul gives a didactic or a teaching or a lesson in letting go. He says if you are going to hold on to the old way of doing it… I don't know what that's going to mean to you after I get done preaching this. You will have to reflect on that. I don't know if it's the way you communicate. I don't know if it's something in this season that actually quit working a long time ago… We have like three clocks hanging around our house that haven't told time in years. I don't know why they're still hanging there. It's probably more trouble to take them down. We'd rather have something that doesn't work on the wall than take five minutes and bring it down.

A lot of us are stuck in something that is old. We froze at a point in time where it's like, "Okay, this is what I have to do". For those of us who are used to doing it a certain way, when God brings us a new blessing, it looks like a threat, and we can't receive it because of what we can't release. He said, "I urge you, brothers and sisters, in view of God's mercy, to offer yourselves as a living sacrifice—this is your true and proper act of worship". So, verse 2 in that context says, "Do not conform…" Write that word down. "…to the pattern of this world, but be transformed…" Conform; transform. You don't need me to do this for you, but I'm going to do it anyway. I'm going to write both of those words on a flash card. We're homeschooling. Graham? Present. Abbey? Present. Holly? Present. If you're here, say "Present". Class is in session.

All right. I'm going to write this down. Last week, y'all were making fun of my handwriting. Somebody said my R in the word normal looked like a 12, and you're exactly right. The question is if I did it on purpose to illustrate the 12 tribes of Israel. I guess you'll never know. It's just two ways of looking at it. One is conform and one is transform. I just wanted to write them down. Y'all, please get past my calligraphy and get the point. Okay? This is the right way; this is the wrong way. What makes it right and wrong is this one, conform, is the way the world works: from the outside in. This one, transform, is the way God works: from the inside out.

Here's how the Lord was showing me the other day. Remember, there's a lesson in letting go. He said, "In this season, I am teaching you to learn to set your agenda from within, to be guided by the Holy Spirit, to let me fulfill my purpose for your life now that your plans have been interrupted". This is really hard. One of the things we're having such a difficulty with right now is we haven't even had the funeral for what we expected this year to be, and now you have a preacher up here talking about having faith for what's going to happen next. This causes me to really sympathize with the Israelites. They were leaving Egypt, and they had to rush out in the middle of the night. They had to leave so quickly they never got to say goodbye.

You're like, "Well, they didn't want to say goodbye". Of course they did. Even though it was killing them, it was what they knew. What we're dealing with right now is, for a lot of us, our plans got canceled and we didn't even get to say goodbye. Even if it isn't really what we wanted, it's what we knew. When you don't get to say goodbye, you don't get closure. So now I'm living in this space where I thought I was going to get to walk down the aisle with my daughter and marry her this year. I thought I was going to get to go be at my graduation. I had some momentum in my business. I was working on this deal. I was working on that thing. I was actually getting my act together. I had this and that and the other, and no sooner did the year start until you had to bury it and trust God with it, and we didn't even get to say goodbye.

So, this is a challenge of letting go, letting go of something when you don't even know what you're reaching for yet. I mean, if you ask me to let go of broccoli for Breyers, I can do it, because I like what I'm grabbing more than what I'm letting go of, but what if it's a mystery box? "I don't know about this yet. I don't know. You're talking about a new normal. I don't know about that". Now, we all have moments of both. We all have moments where we're like, "Man, this is actually kind of nice. Everything got cancelled. It's kind of nice. I kind of needed to get a break".

Now it's like a forced break on all of humanity. It's like a global snow day…unless you're sick or someone you love is sick or unless something dries up that you were depending on or unless it might. So we're going back and forth. It's like, "I want to get back to normal, but I kind of want to go into something new". It's like, "Man, I can't wait for everything to get started back again, but it is kind of nice having meals with my family. I wasn't doing that before. I kind of need some job stability, but you know what? I've been wondering if I really even want to work there anyway. I don't know which one. I'm trying to find my balance in between".

The lesson of letting go is not only that external events cause us to let go, but the way God changes us is transformation from the inside out. Isn't that really relevant while you're stuck inside, that that's the way God changes things? The way the world works, from the outside in… "Oh no! What's the job market doing? What's the economy doing? When are they going to lift this, and when are they going to lift that"? The way God does it… You have Paul and Silas, and they are stuck in an inner cell, but when they are stuck in a tight space is the moment they understand "We've got to give God the greatest praise in the tightest space".

This is a time for more faith, more hope, more optimism. Your anchor really has to grab hold right now, because you don't know what's next. That's where God lives: in the mystery. Yet our old mind, our conformed mind… "This is the way it's supposed to work". Is it possible that God is trying to get you to unlearn the way the world works so you can see how he works? What does God want me to unlearn? "I can't handle it anymore". Sure you can if you loosen your grip, if you believe he's with you no matter what the next season looks like. You could bench-press 395. You could lift it if you weren't gripping it so tightly. You could lift it if you weren't gripping it like this. He said, "It's your grip that's hurting you, not the weights". You're actually strong enough. Christ is actually in you. You actually have a new nature.

Now you just need a new normal. You have a new heart; you just need new habits. What's in front of you is greater. You just have to let go of some things you know. I don't want to do it either. I like what I know. That's why I know I'm eating hamburger steak and green beans from Cracker Barrel, because that's all I ever eat. I don't even have to ask what she ordered me. I like what I know. "God, do a new thing, but make it just like what I've known before".

So when we get knocked off our balance, that's from the inside. That's how God transforms us. He destabilizes the outside in order to strengthen the core. That's what he's doing in my life right now. He's teaching me to release. If you would just do it physically, you could feel what I'm saying. Get the tightest grip you can right now. I mean, to the point where you feel your blood in your toes cutting off because everything in you is constricted. That's how your soul feels right now. This is how your mind is. You're closed-minded. Keep the tight grip now. This is an illustrated point. This is an object lesson. Grip it so tight and feel like you can't take it anymore, and now release. That's what's going to happen when you look around at what you have left instead of dwelling on what you've lost. Release.

"What do you want me to release, Pastor Steven"? Not the steering wheel. Don't release that. Just release your need to know. Once you release that… Look at how much strength you have. Look at how much praise you have. Come on, do it right there. Forgetting what is behind and straining toward what's ahead. It's not going to be easy. Freedom is not easy. He told Moses it wouldn't be easy. It's not going to be easy. When all you've known is bondage, blessings seem strange. When all we've known is busy, busy, busy, rest feels like something to be resisted. When all we've known is worshiping idols, worshiping the true and living God who lives within feels foreign. But God said, "You have the strength you need if you will release what you can't carry, what you can't control". That's what he's teaching me: the lesson of letting go.