Steven Furtick - What Does God Want To Double In Your Life 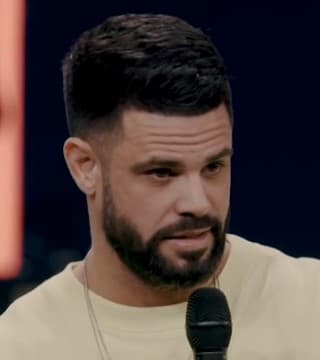 God knew what he gave you. God's not mad at you over the time that you don't have. But see, we have to snatch back the little moments where we can meet with God. Some of us were saying, "Well, I would pray more, but it's just so busy in my life". So, we're waiting on like a whole weekend to spend with God where we can go to Scotland and have some scenery, and "I'm going to memorize a book of the Bible one day". You better take that phone, pull up that Bible app and sneak away to the bathroom during lunch. I used to do this in college because it is not how much time you have. God can speak to you in three minutes and change the next 30 years of your life. Flip it. Turn it into something. That was the master's happiness.

He's like, "Cool man, I gave you five, you brought me 10. I gave you an opportunity. You made it better. I'm happy about it". The master was happy, the servant was happy except the one. The one who got one bag. He was probably happy at first because there are only three servants that got anything in this passage. And I guarantee you there were more than three that worked for the master. Can we study the Bible? You all looking at me crazy right now. Can we study the Bible? What else do you all want to do? So, it's a blessing to be trusted with anything, right? A lot of people didn't make it to your age. A lot of people didn't survive.

And he doesn't have a name in the parable. Jesus didn't give names in parables. That's how we know they're not real stories. She's used them to illustrate a purpose. But we'll call him Billy, just to... One Bag Billy. Any One Bag Billies in the house? Come on, I'm not the smartest. I did not go to Harvard. I did not go to Yale. I barely passed biology. Any One Bag Billies? Billy's skipping down the street. "I got the bag". And Billy was so happy about the bag until he ran into the other guy. And the other guy was like, "What's up, Billy"? And Billy's like, "I got the bag". And then the other guy was like, "I got the bags too". And Billy's like, "Did you say bags? Plural"? And then, the Timmy, Two Bag Timmy... "Come on, you all. I'm working for the Lord up here". Two Bag Timmy's like, "Yeah. He gave me two bags". Billy's like, "Two bags"? "How many bags you got"? "Well, just the one. I'm a one bagger".

You felt good about what you had until you went on Instagram. This has needs to be in the parable. One Bag Billy went on Instagram. And not only did he see Timmy skipping with two bags, but here about the time that he sees Timmy, here comes Freddy, Five Bag Freddy. Freddy's like, "Eyy". And God told me to tell you this very succinct statement. This is something I want you to get in your spirit right now, you got a lot. It's going to take a little math and some of us are bad at math, but you really got a lot. As a matter of fact, we mentioned breath.

Let me tell you what I googled this week. If we live to be 71 and I don't know if we're going to make it if we keep watching CNN and Fox news and scrolling Twitter, we might not make it to 71 if we keep giving ourselves ulcers and blaming it on the devil when really it's our viewing habits and our clicking habits and our watch time. Amen. But if we make it to 71, we will take 750 million breaths. You just did it again. You just did it again. But it's easy to feel fear. When Billy went on Instagram and saw it was two talent Tuesday, all of a sudden, he went, "Oh, man". Sometimes, you feel good about your vacation until you see somebody else's. "Man, I felt good about my physique the other day because I've been working out, man, for like six years now". And then, The Rock came on my phone. Dwayne Johnson came on my phone, I put on a hoodie.

So now, we're crossing cultures here. This is an ancient measurement and it doesn't convert into U S currency or whatever you're watching this in pounds or pesos or any of that. But if we track it back, it's hard to make the connection because this is at the ancient texts that we're trying to bring into modern times. But roughly, we could say that he was entrusted with 6,000 days of wages, one talent. And see, it depends on how you count it, how much you see it as be. I'm about to preach on this math lesson. 6,000, that would be roughly over $1 million. If you convert the currency, it doesn't exactly convert... it's hard to do the conversion from Palestine to Ballantine. That was premium. That was premium preacher stuff right there. But if we could convert it, it's like saying he had a million. He had million. To me, a million is a lot. Maybe not to you, but to me...

But see, in our culture, we worship the bag and so we never see what's in it. We worshiped the flesh. We're so carnal we can only see followers so we don't pay attention to the favor of God that has been working in your life since you were a child. God was with you and one word from God is a lot. Let me say it another way. One drop of blood was a lot. One drop. If you got the blood of Jesus covering your sin, removing your shame and canceling the record of the law that stood against you, if you've got forgiveness in life in his name, shout, "I got a lot". Tell the devil, "I got a lot. It's still a million. I might not have what they have, but I got breath and everything that has breath praise...". It's still a million. It's still a million. You're still here. You're still saved. He still loves you is still a million.

So, you have to break down your blessings so you don't take them for granted. The devil operates in generalities to keep you from seeing the treasure of your talent. Always envious of somebody else's. I'm telling you right now, this message will change your life because some of you, you think you are stuck with what you started with and you're not. I promise you're not. Flip the bag. God made some people such good listeners that they can get promoted on what they don't say. Double down on your gift. "Well, I'm not that good with words". Then shut up and look smart. In the meeting, just squint your eyebrows. Everybody be like, "He's deep". They won't know how dumb you feel. Flip the bag. Work that shy gift. "Oh, he's mysterious". You might get a wife being shy. She won't find out you're boring until it's too late.

And listen, I was thinking the other day, I went over to my mom's for dinner Wednesday night. We go over there every week and she cooks for me. Oh, she made this meatloaf this week, paleo meatloaf. It was good. Better than it sounds. They don't sound good but it was good. And I looked at that platinum record that I took over to her house for O Come to the Altar. This started with a voice memo I sang in my song in my phone, just a little scrap of a song that Chris and Wade and Mack and the team came around and we finished it. But now listen, when I looked at the platinum record, what I thought about was how my mom took the talent that God gave her as a mom. And it was right that I took the record to her house.

When people come to see my mom, she stops them because it's right in the foyer. It's not in some back room, it is right there at the door. In fact, you can see them from the road. When you sell a certain number of songs, they give you a gold record and a platinum record. I gave her the gold. I gave her the platinum. She didn't know you replaced the gold with the platinum. She put both of them up there side by side. My mom is the one who worked it out for me to go take guitar lessons. She does not play guitar. But she took her talent, you understand? And when they couldn't afford guitar lessons for me, my dad started cutting Harold Staley's hair for free so he would teach me. My dad couldn't teach me guitar, but he could give a fade.

What I'm saying is that it's right that the platinum record is hanging on her wall because she is the one who flipped the gift. Some of you don't even know the difference that you're making right now. And it brought back a memory. When Harold couldn't teach me anymore, I needed another teacher that charged money. And she would drop me off at Jack Cribb's house. Jack Cribb was a local legend. Wasn't he too?. Customs Four Plus Two, they played it every Fourth of July festival Moncks Corner ever had. But he taught lessons in his garage and he sat on the freezer. It's a real fancy setup too now.

He sat on the freezer and I got the stool. And he taught me the Beach songs that would teach me the chords. I don't know a lot of cords. I'm not a music theorist, but the chords I know, I put them to work. It's not how many cords I know, it's what I do with them that makes you feel it. You don't have to know a lot. You don't have to know a lot. I promise you, you don't need a big vocabulary. My mom didn't even have so much money. So, what she would do... and she was like, "How did you remember this?" when I shared it last night. I was like, "Because you made me help".