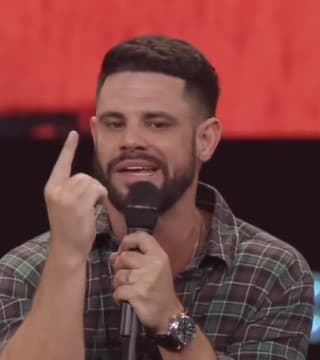 What God is doing in your life right now… He is going to show you his glory in a way you've never seen before. He's going to show you his demonstration of power in a way you haven't experienced it yet. I know it's really difficult to stay in that place of faith. In fact, the Bible says in verse 17, "On his arrival, Jesus found that Lazarus had already been in the tomb for four days".

This is significant to the Jewish audience for which John intended this gospel account. They believed that within the first three days of death the spirit could return to a man. It was a sort of superstitious belief that was common to Judaism in the first century. Jesus waited until after their time period expired to reveal his glory. I wonder if God is waiting past the point of your expectation so his strength can kick in with a new velocity. He showed up after four days.

"Now Bethany was less than two miles from Jerusalem, and many Jews had come to Martha and Mary to comfort them in the loss of their brother". They came to comfort Martha and Mary, because that's all they could do. There's only so much people can do for you, even if they mean well. There's only so much your friends can do for you. Stop worshiping people. People can only do so much for you. Don't make them an idol. They are not your god. People can be a gift, but they cannot be your god. There are some things in my life that only Christ can do. There are some things… I appreciate the help, I appreciate the prayers, I appreciate the well wishes, but I need Jesus for this job. This is a big one. I need the Master. I need the Healer. I need the Great I Am. I need the Bread of Life. I need the Light of heaven. I need Jesus!

Verse 20: "When Martha heard that Jesus was coming, she went out to meet him, but Mary stayed home". We all have different ways of dealing with disappointment. Some of us get under the covers. I love Martha. She met him at the gate. "Oh, you want to show up now. Welcome to Bethany, the same Bethany you came to to eat my cooking. You came when I cooked, but you didn't come when I cried. It's good to see you. It would have been really good to see you about two days ago. It's good to see you. I appreciate the comfort, I appreciate the peace, but why didn't you just keep it from happening so I wouldn't need the peace"? The stuff you won't say, but Martha would. Oh yes, she would.

The significant thing is not even what she said; it's the fact that she showed up. She comes to Jesus at the gate. This is funny, because every other time he has been to Bethany she let him in the house. Not this time. I love how God will come as far as we let him in our lives. She met him at the gate. This is just a story about a man named Lazarus, but it's really a story about whatever you brought in here today that died on you. People say sometimes that when you preach you shouldn't make the Bible about the people; it's about God. A woman named Mary, a woman named Martha, a man named Lazarus, a man named Jonathan, a woman named Rachel.

I wish I had time to do every name in the house, but some of y'all have hard-to-pronounce names, and you'd be embarrassing me. He deals with her individually, and she says exactly what she means. "Lord…" "You're still Lord". I love how she shifts the perspective from Lazarus to Lord. I love how she still has this understanding. Watch this. "You didn't do what I wanted you to do, but that didn't change my understanding of who you are". I want to preach this kind of faith so when he stays two more days instead of running to see about what you need him to see him about you won't change your mind about who he is. She said, "If you would have been here, my brother would still be here. If you would have been here, like you used to come here when you needed a place to stay and you didn't want to go on Airbnb… I'm not cooking for you this time. I'm upset". She offers Jesus an honest assessment about what she expected.

The most godly prayer you can pray is the most honest prayer you can pray. The most honest prayer you pray will be the most godly prayer you pray. She says, "I expected you to come. Did you not get the message? You left me on read. You left me in my hurt. Lazarus kept getting sicker and sicker, and my faith got weaker and weaker, and at first I thought, 'Surely he has been detained', but then I found out you didn't come on purpose. If you would have been here… If they would have raised me… If they wouldn't have abused me… If you would have stopped it… If you would have prevented it… If you can do all things, why didn't you do what I needed you to do that I've seen you do for others? I saw you heal people. I saw you touch lives. I saw you take better care of people who treated you worse". "But you have confused my love with conformity to your agenda". "If you would have been here, Lazarus would not have died".

Then something takes over Martha, and I'm praying it'll take over us today, because everybody in here has a Lazarus. Everybody in here has something you just buried or you're in the process of burying, and there's a funeral going on at the same time that faith is trying to be born in your heart today. Something kicks into Martha's spirit, and she's like, "If you would have, then we could have". Look at verse 22. "But I know that even now…" I want somebody to shout right now. Just say, "Now". God is present in this moment. God is with me in this season. God is for me in this moment. God is with me in this season. Shout, "Now"! I know that Devil has been trying to keep you at the grave side, but let's bring our disappointment into the presence of God for a moment and declare that even now he is sovereign. Even now he is holy! Even now he is good! Even now he is working! Even now he's showing up! Even now God will give you whatever you ask.

"Jesus said to her, 'Your brother will rise again'. Martha answered, 'I know he will rise again in the resurrection at the last day'. Jesus said, '[You're missing the point.] I am the resurrection and the life'". "You keep trying to prove my presence by what I do, but I want you to see who I am, so I didn't do what you wanted me to do, because I needed you to see who I am. I am a friend that sticketh closer…" "The one who believes in me will live, even though they die; and whoever lives by believing in me will never die. Do you believe this"? Do you believe this? "Do I believe what, bro, Preacher"? Do you believe what I just said? She answers, "Yes, Lord. I believe that you are the Messiah…"

God brings us to these points to see what we will do with our disappointment. She met him at the gate, and she confessed faith in him even in the absence of the miracle she so desperately needed. "I believe that you are the Son of God who is to come into the world". Verse 28: "After she had said this, she went back and called her sister Mary aside. 'The Teacher is here', she said, 'and is asking for you'. When Mary heard this, she got up quickly and went to him. Now Jesus had not yet entered the village, but was still at the place where Martha had met him". He will stand where you need him to stand, and he will come as far as you invite him. Listen to what that means. If you choose to keep God at a distance… He stood at the gate. Mary was mad too. I love how they were both mad but they still got a miracle. Mary fell down at his feet, not in faith but in frustration. But she came to him, and everybody followed her out there, everybody who came around… Aunt Margaret.

Verse 32: "[She] reached the place where [he] was and saw him [and] fell at his feet and said, 'Lord, if you had been here, my brother would not have died'. When Jesus saw her weeping, and the Jews who had come along with her also weeping, he was deeply moved in spirit and troubled". When he saw her pain, he participated in it. The Lazarus factor is not only that God gives miracles in desperation. The Lazarus factor says that he is with us in the pain of disappointment as well. He asked Martha, "Do you believe this"? and he asked Mary for a location. "Where did you lay him? Take me to that place".