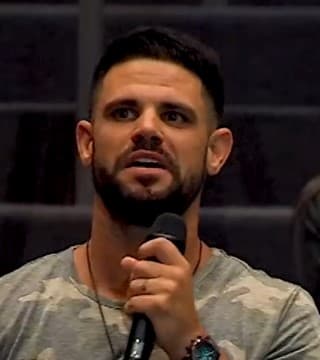 Have you ever survived anything? Have you ever given up hope, and just when you gave up hope, hope didn't give up on you and grabbed hold of you in the depths? I've been preaching this all weekend, but I feel something special happening right now for somebody who is in an unexpected place, a strange place, a small place, a stuck place. The Bible says that those islanders were so kind to the prisoners, 276 of them in all, that they built them a fire. Paul was such a good dude he decided to help. They're building a fire, and Paul doesn't want to stand over there like me at a Love Week event, looking like some lazy preacher who doesn't know how to do anything. Paul grabs a piece of wood. Look. It's right there in verse 3. "He gathered a pile of brushwood and, as he put it on the fire…" Trying to help. "…a snake came out".

Let's go back to everything that has happened to Paul. He's imprisoned for preaching the gospel. He's shipwrecked because the sailors are too stupid to follow his advice. Now he's cold on Malta. We're talking about Malta. Stuck and stranded, shivering and cold, uncertain, in an unfamiliar place. Just as he thinks he has made it to safety, he gets struck by a snake. This is almost comical…unless you've been there. Just when you thought the fight was going to be over, here comes something else. The snake pops up out of the fire that Paul was simply trying to help them build on an island called Malta where he never even planned to go, and the Bible says it fastened itself to his hand.

So this is not some quick little strike. This snake bit down on Paul. Watch what the people did, because you have to be careful about people. People will always assign a reason to why you're going through what you're going through. "Well, if I were her husband I would have left too". People will say stuff like that. Not to you. They never say it to you. They just think it about you. They think the reason bad things happen to you is because of something you did. Well, the islanders are watching this guy who has a snake on his hand, who just came crawling out of the sea with some seaweed around his ears, and he claims to be a preacher and a servant of God. "If you're a servant of God, why isn't God protecting you"?

Paul's response… That's the word. Watch this. He didn't say a word. He didn't try to convince them that God was with him. He didn't feel sorry for himself. He didn't go on Facebook and write a response post. Watch what he did. He did what you have to learn how to do when you make it through the storm and all hell breaks loose on the shore, when they talk about you, when it looks like this is the end, when you've been through it and it keeps coming. The Bible says Paul shook it off.

When the snake fell off of Paul's hand and died in the fire, it wasn't a surprise to him. He knew it had to happen. "I had to survive. I had to make it. I had to get through it. God had to prove his power". I feel your presence, Lord, for everybody who has been wondering "Why"? You've been stuck on the "why-land". You know what I'm saying? You've been so busy trying to figure out a reason, and God is trying to give you a revelation. Not just you but everybody watching you. God wants everybody to see you shake it off. God wants everybody around you to see you trust him though he slay you. That's why the snake had to bite him, because faith doesn't prevent me from getting bit.

Faith doesn't prevent me from washing up on the shore. What I love about it is that after Paul shook the snake off, the people stood back and watched to see what was going to happen next, because that's what they do. They don't bring you an ice pack or an aspirin. They will stand there and watch you. The Bible says they were shocked, because they expected him to swell up. You know you have some people who are surprised that you made it and surprised you're still happy. They thought when they broke your heart you were going to quit, but look at you in church, worshiping God, serving God, believing God. Look at you.

So they're like, "Oh, let's see what happens next". They waited a long time, and then when they saw he didn't swell up (or turn into a walker), they changed their minds. This is why you cannot put your confidence in people. They changed their minds and said, "He's a god". One minute he's a murderer. Now he's a god. One minute "Hosanna". The next minute "Crucify him". That's why your response cannot be to people. Even when I preach… I love you, but I can't preach for you. I can preach to you but I can't preach for you, because the thing I say that you need to hear might make you cross your arms and get an attitude. Well, sit back and take it, honey, because if God sent it, I'm going to say it.

Now watch this. I want to show you one more thing. So he shakes off the snake. They think he's going to die. He doesn't die. That's a cool place to end a sermon, I think, but I want to give you something that will maybe help you. Let me just see from a show of hands. Is there anybody in here who has found yourself in Malta recently? It could be a season. Malta represents that stuck place. I think these are the kinds of generic questions that people ask because we know it's guaranteed to get 100 percent participation. I mean, who doesn't feel stuck from time to time?

That's kind of the point, isn't it? We all must go through Malta. Paul, at this point in the story, has a decision to make: misery or mission. We already read that it was rainy and cold. We already read that it was unfamiliar. We already read that the man almost died. Now he has a decision to make, and so do you about this season of your life. Paul didn't decide to go to Malta, but now he has to decide what to do while he's there. He can sit and wait to get off this stupid island or he can do on Malta what he did in Jerusalem. So they think he's a god now, so they're like, "Hey, this guy is important". Apparently, the chief of the island hears about it, and he wants to have dinner with this guy who can survive a snake bite.

Your opportunities in life will be the by-product of adversity you go through. He gets invited to the home of the official on the island because he was able to stand up under the trial. You keep praying for the opportunity, but you don't want to stand up under the adversity. It had to happen. I had to go through something. I had to prove perseverance. That's the only way my faith could grow to enable the opportunity. Look at this in verse 7. "There was an estate nearby that belonged to Publius…" (Which is, incidentally, a baby name that is available to any of you who are looking for something to name your child that will get them beat up).

This guy is important, and he wants to see the guy who was able to stand up after the snake bite and survive the shipwreck. "He welcomed all of them into the home and showed generous hospitality for three days". I'm imagining Paul is thinking, "This is nice". But at some point during Paul's stay he learns that Publius has a problem, and Publius' problem is about to become Paul's opportunity. Publius' father is sick in bed with the Malta fever, and it's bad. He has a fever and dysentery. Paul, when he heard about it, went in to see him.

Now the way I picture it, and maybe I'm using too much imagination, but I imagine that they're sitting down to a meal, and Paul sees somebody wheeled into the room and says, "Who's that"? and Publius says, "It's my dad", and Paul says, "What's wrong with him"? and Publius says, "He's sick, and there's nothing we can do about it". I imagine about right here is where Paul started smiling, which seems kind of weird, but maybe this is the moment Paul realizes, "There was a reason I went through the storm. There was a reason the hurricane hit. There was a reason the ship had to break apart. There's a reason we had to run aground on Malta". Paul said, "Can I see him? Can we have a moment"?

The Bible says that when Paul went in to see him, he prayed for him. Watch the next part. You're going to love this. Paul went in and prayed for him, and after prayer… It had to happen. You had to be here at this sermon today. There is something God wanted to speak to you. You had to be here with the ZZ Top beard. You had to be right there in that section. Paul put his hand on Publius' dad's head, and when he put his hand on his head, the Bible says he was healed, which is a miracle all on its own, but what made it even more amazing to me was to realize that the same hand the healing came through was the same hand that had a snake hanging from it just three days ago.

Oh, come on! You ought to start praising God right now. What you went through that didn't kill you… Paul says, "I can't keep the snake from biting me…" It had to happen. The other day, Abbey came up to me and said, "Elijah just bit me". I said, "Did you bite him back"? She said, "No, sir". I said, "Go upstairs and tell your brother, 'You can bite me again if you want to, but Daddy said to tell you if you bite me, I bite back'".

Now that might not be good parenting, but this is good preaching. Somebody tell the Devil, "I bite back"! The same hand that the snake bit became the hand the healing came from. What did you go through that you wish you wouldn't have gone through, that you never should have gone through? I came to declare over your life it does not matter the reason. What matters is your response. You're on Malta now. Malta is what you make of it. The Bible says after he laid his hands on that man's head, word got around the whole island. "This guy has something. This guy knows somebody".