Steven Furtick - I Can't Seem To Get It Together 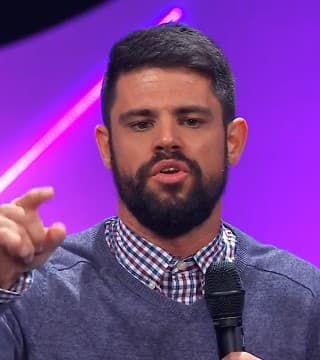 The Lord asked a question. "Can they live again"? Now the question here is not if God can make dry bones live again. The question is…Can these dead bones live again? Most of us have a belief that God can do big things. We just don't know if he can do big things through somebody as small as us. It's not God we doubt most of the time. It's these bones. It's this. Not that, but this. The Lord said, "Can they live again"? Ezekiel said, "Only you know, Lord". The Lord said, "I want to use you to speak life into something that seems to be dead".

Stop talking about it and start talking to it. Stop listening to every dysfunctional thought that comes into your mind and start telling your mind to align with the Word of God, with the perfect, flawless Word of God, with the invincible, incorruptible Word of God. Dry bones, hear the word of the Lord. I'm done describing problems. I've spent my whole life letting my problems define me. I'm about to declare some promises until something changes. He said, "Dry bones, hear the word of the Lord. This is what the Sovereign Lord says to these bones: I will make breath enter you, and you will come to life".

What if you made the shift, the graveyard shift, and started speaking about what you saw in the garden while you stand in the graveyard? It's a shift. "I'm done talking about this. It's time to talk to it. I'm done thinking about this. I want to think my way through this. I want to think some higher thoughts". He said, "Here's what God is going to do. 'I will attach tendons to you, and I'll make flesh come upon you, and I will cover you with skin, and I'll put breath in you'". See the detail? "I'll make your patella work right again". Sometimes you have to point to something in your life and specifically start giving instructions to the parts of your life that don't align with God's Word.

Watch what happened when he did. He started speaking about what God was going to do before he could see it. Verse 7: "So I prophesied as I was commanded". He didn't see the picture yet, but he had the power. See, if you release the power, it's just a matter of time before you see the picture. Stop trying to wait until you see the picture to pronounce the power. You have to release it before God will reveal it. He said, "When I said what God told me to say, I heard a noise. I didn't see a sight yet, but I heard a noise".

Faith comes by hearing, and hearing comes by the Word of God. If you wait for what you see, you'll always walk by sight and not by faith, but if you'll go by what you hear, you'll hear a sound. Elijah said, "I hear the sound of the abundance of rain". "I don't see a cloud in the sky yet, but I hear something starting to shift, starting to shake, starting to rattle". There was a noise. He said, "I heard a noise. I heard a sound, a rattling sound". God said, "The stuff that has been rattling you, you're about to rattle it".

So now that we have established the introduction, let me preach my message. He said the bones came together, but something was wrong. He said the bones started to come together and there was skin on them and flesh on them. It looked better than it did when he got there, but just because it looks better doesn't mean it is yet. Just because you look successful doesn't mean you really are. Just because you look happy, just because you tucked it, painted it, Botoxed it, tanned it (white people)… Oh, you can put some lotion on it too. I'll speak to everybody in the church. He said, "I looked, and they had all the stuff, but there was no breath in them".

So what came next? This is the part that all week long, I've been reading this verse… The way a sermon typically comes to me is that an idea or a thought, particularly a passage of Scripture, or maybe just a phrase, will seem to jump off the page, do a cartwheel, throw confetti, and scream and yell, "Yay, over here. Preach about me", until I finally engage with it. Every time I would read this phrase this week I would become emotional and get teary-eyed reading what God said to Ezekiel next, because I believe it's the thing many of you have been missing that is why your life looks religious or why your life looks together but something is missing. It's what God said to Ezekiel next. "Then he said to me, 'Prophesy to the breath'".

I believe this is a picture of worship. I believe that because the Hebrew word for breath is ruwach, and that word ruwach is translated in English both as breath and spirit. It's the same word. There's no distinction. So when God breathed into Adam in Genesis, chapter 2, verse 7, the breath of life, the ruwach of life, he was breathing his breath, which became the spirit of the man. He formed the man from the ground, and then he filled the man with his breath.

I felt like the Lord said, "When you go out there this week, don't preach. Do a sermon, but instead of just preaching, prophesy to the breath". Then I said, "Well, Lord, what does that mean? Because if I just get up there and tell the people to prophesy to the breath, they're going to look at me…" Like you're looking at me right now. This is what I predicted. I studied it, and I kept studying it, looking for a technical definition. I found none, but toward the end of this week, as I was trying to figure out exactly what God wanted you to hear from this passage, I was walking past my bookshelf in my office, which is full of many big books I have never read, books they taught me how to purchase in seminary, and if you ever see them, it will look impressive to you… I was walking by that bookshelf, looking for a book that may give me some further direction.

It's funny, because I don't really believe in that much coincidence. I mean, some things are coincidental, but did you know in Hebrew there is no word for our English word that we call coincidence? Because to them it didn't exist. I know some things are just coincidental, but this seemed kind of weird to me. I'm walking, I'm studying about "Prophesy to the breath", and one of the worship songs that is by a friend of mine… I call him a friend. He's really more like an acquaintance.

I'm sure we'd be friends if we had more time together, but I haven't been around him that much. His name is Martin Smith. We've been at a few events together. He led the Christian rock band called Delirious. In the 90s, they were the biggest Christian rock band. They were bigger than Bono and The Edge in the 90s, and they actually took a lot of Christian music mainstream. He wrote a lot of the worship songs we would have sung through the last few decades.

I was walking through my office by the bookshelf, and one of his songs came on the speakers in my office just randomly. While the song came on, I walked by his book he had given me in Bogotá, Colombia, the last time we were together. The book is called Delirious, and it's about his band and it's a memoir of his life. I thought, "Well, this is kind of quirky coincidental. Maybe it's not coincidence. He's a worship leader and I'm kind of talking about worship. Maybe I should take this book and read a little bit of it and see what's in it".

So I pulled it off the shelf. Martin, if you ever watch this, I'm sorry it took me a year to pick up your book. Most of the books I just put on my shelf. If you ever send me one, I probably won't read it, because I have a lot of books. But I pulled this one out. I said, "I'm going to read the first chapter and see what's in it".

When I read it, it didn't take me long, because I saw why God had me pick up this book, and I understood why God told Ezekiel to prophesy to the breath, and I realized why God had me preach this message to you today. He's telling a little bit about his life before he became a rock star. He's telling about when he was a little child, and he says, "My mum and dad still talk about the day. At two months old I developed bronchitis, which gradually worsened. At six months old, when my parents rushed me back to the hospital…"

I didn't know this part of his story. He said, "…I was diagnosed with bronchial pneumonia. I couldn't breathe, I wasn't crying, I wasn't even making a sound. So the medics took me and placed me inside an iron lung, a covered and sealed cot designed to get little bodies like mine breathing again. My parents had no idea whether I would make it out alive. They watched me laying silent, my life in the hands of this strange-looking piece of equipment. All they could do was pray. Their prayer was simple: 'Thank You for giving Martin to us. We are willing to give him back to You, but could You please breathe into his lungs and let him make a noise?'"

What the Devil will try to do is take your breath away. He'll try to hit you so hard. He'll try to let life confuse you so much it'll knock the wind out of you, that it'll knock the breath out of you, that you'll spend your life gasping for breath, that you'll spend your life trying to breathe and wondering, "Why is this not working"? God said, "I brought you to church this weekend so you could breathe again. I didn't just bring you here so you could hear a sermon and sing some songs. I want to breathe my life into your lungs until you make a sound".