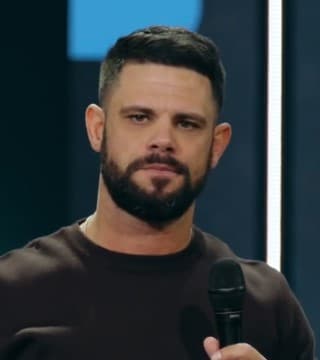 How many are glad that God has "call waiting", that God will call you again? Ask Jonah. Jonah wasn't even a talented preacher. He didn't have funny stories. He didn't have good charisma. He didn't even like people, but God used him, because when God calls you he will call back. You know how there are some people you have to call when you call them, so you're secretly hoping you get their voice-mail because you really don't want to talk to them anyway?

That was really the answer. It's not only the culture that confuses us in our calling, it's not only our contacts sometimes, but it's the conflict of calling. The conflict of calling is great on an internal and an external level. What Samuel did next… What a beautiful little story to show us that God repeats things. That's one way I know he's speaking. Have you ever noticed this? When God is trying to get your attention, it's kind of like when you're shopping for a certain car and you start seeing them everywhere. When God wants to get a message across to you, he'll put you in the market for it. You never even looked at anybody else's Beats, but now you're like, "Well, what's that one? How's that one different than that one and this one and the other one, because I'm in the market for God"? When you get in the market for God, you start noticing that he has been speaking all along. There was confirmation.

This is the word of the Lord for you. When it happens again, if it happens again, just say, "Speak, Lord; your servant is listening". I want to show you something that the Lord just showed me. His greatest revelation happened in rest. Eli didn't say, "Oh! That may be God. You'd better run out and catch him before he leaves. Boy, if God spoke to you, you'd better chase him down". No. If it was God speaking, he'll come back. All you have to do is be in position for it. That's all you have to do. You don't have to find it; it'll find you. Trust me. God is not playing hide and seek in the tabernacle. God is not running around the tent saying, "Ha, ha, ha! Maybe if I hide behind this table of showbread Samuel will never find me back here. Samuel! Ha, ha, ha"!

God is not hiding behind the laver. He's not hiding. Even though God is always moving, he's never hiding. That's what the tabernacle was. It was a portable structure. They set it up in the wilderness, because they never knew when God was going to say, "Stop" and when God was going to say, "Go". Why? Because God does not want you to depend on his will; he wants you to depend on him. There's a difference. One is "God, just show me what to do. That way I won't need you". The other one is, "God, I want you wherever you lead me, wherever you take me, whatever it means, whatever it costs, and whatever it looks like".

Here's the conflict. Samuel goes in and lies down. The Bible says he didn't know the Lord yet. He knew how to bake the bread in the tabernacle. That was his job. He knew how to open the doors so people could come worship. He knew how to follow Eli around, and "Get me this" and "Get me that". But there's a big difference between the rituals of religion and a relationship with God. If you're going through the motions, like singing songs not really thinking about the words, just kind of singing them, or hearing little forgettable things I say in my sermon that you won't even remember what it was about 15 minutes after I'm done, it's possible that you don't know the Lord yet.

I don't mean you're not a Christian. Not necessarily. I don't mean you don't believe in God. Not necessarily. But to know him is to know his voice. When you know him like that, you can hear things that are hard to hear, but you can know that even when he says things that are hard for you to hear he says them from a spirit of love, grace, and purpose. One of my friends is a real over-texter. I can't keep up with him. I love him, but my thumbs hurt. I can't do it. I don't voice text because it's annoying because it corrects the wrong words the wrong way, and you can get in trouble that way and say something you didn't mean to say, end up firing somebody you meant to hire, but it changes it. It doesn't know, because your voice.

Anyway, one time he texted me. He said, "How come our conversation is all gray"? On iPhone when they text you it's gray. When you text back it's blue. When he said that, I wondered if sometimes my relationship with God is all gray, to where he is speaking and he is prompting and he is provoking… But God can speak, speak, speak…

Three times he did it. God didn't say anything different the third time except this. When he said, "Speak, Lord; your servant is listening", and he lay down in his place… I have to hit that really quickly. It says, "Samuel went and lay down in his place". That's verse 9. In his place. You will realize God's purpose when you get in your place. If God is dropping off the mail but you're not home, you won't get it, and you'll think he didn't send it and you'll think he didn't speak. But I learned something with my friend. It was not just the conflict of the calling; it was the color. It was all gray, but the breakthrough is in the blue. It's not just when God speaks; it's when you get in your place and say, "God, here I am, the real me, the honest me, the open me, the ready me, the humble me, the broken-down me, the me that is ready to do your will. I've done my will and I saw how that worked out and I'm ready to do your will".

That's what Isaiah said. He said, "I'm an unclean man with unclean lips, but if you'll take that coal and touch my lips, I'll speak for you, because holy, holy, holy is the Lord God Almighty. So here I am; I'll go". Moses stood at a bush. He turned aside, took off his shoes, and said, "God, I'm slow of speech. I'm not eloquent, and you saw the things I did that put me in this predicament, but if it's you calling, here I am". Jeremiah said, "I'm too young for this and your people are stubborn and you know they're not going to listen, but if it's you calling me, here I am". The reason I'm confused about my calling is because I don't just have one. This is what I didn't know in my 20s. I felt like God called me to preach.

Have you ever felt like God called you to do something, put you somewhere? I mean, maybe it wasn't something big and spectacular. Maybe you're not going to do a halftime show at the Super Bowl with it, but God called you to do something. There's a blessing in it, even if it's a small thing. You say, "Okay, God called me to do this". But then what happens… I was called to preach, so I started preaching. I started going around preaching. I'm preaching everywhere. I'm preaching everywhere they asked me to come preach. I'm preaching at the lock-in. I preached one time so late at night… It was 3:00 a.m. I had this sermon illustration where I would take a mirror and break the mirror. I preached Genesis 1:26 about the image of God.

Holly can tell you we knew where the mirrors were in every Walmart in the state of South Carolina, because every time we'd get to a new little town to preach to 15 kids I'd go in and get a mirror, and then I'd break it with a hammer and say, "This is what sin does to you". You know, put the condemnation on the young people. Just put it on them hard. Breaking mirrors. One boy went to the emergency room because the glass flew up and hit him in the eye. I had to call his parents and tell them not to sue me. "I'm a man of God, and I have a ministry, and if you sue me God is going to curse you". I didn't say that. But I was running around preaching.

Then I married Holly, and I realized I'm called to be her husband too. It's the conflict of calling. It's complicated. You can make it sound simple. "Find your calling". Which one? Because then I was called to be a preacher and a husband, and sometimes they needed different techniques. What if I walked home and said, "Holly, give him a shout of praise"! It's different callings. "Touch three people"! She's like, "It's just us". Then by the time I'm getting these callings… How many of you have at least two callings in your life, at least two things you're responsible for, and they're in conflict sometimes? Here she comes pregnant. Four years into marriage, here she turns up pregnant. Now I'm called to be a parent.

Do you ever feel like you're not just putting on different hats but you actually have different heads? I read that in that Sittser book, The Will of God as a Way of Life. He said, "I felt like I didn't just have different hats; I had different heads". This is the conflict of calling. The answer is always availability, presence, access. When he said, "Speak, Lord; your servant is listening", it created access not only for God's word to come to him but for God's word to come through him. What God said was difficult. He said, "I'm transitioning. Not only am I transitioning you from an apprentice to a priest, from a priest to a prophet, but I'm transitioning Eli and his sons out of the earth so my purpose can be fulfilled. I'm transitioning. You're going to have to go through a difficult transition right now".

By the time we get to 1 Samuel 4:1, the Bible says, "Samuel's word came to all Israel". I was curious why it didn't say "God's word through Samuel", but by this point in 1 Samuel 4, because Samuel said, "Here I am; speak, Lord", we have now gone from "The word of the Lord was rare" to "The word of Samuel came to all Israel". He had gotten to a point where he heard God's voice on the level, that when he spoke, what he spoke came directly from the throne of God. God wants to get us to the place where we are not running around all the time talking about what we're going to do one day.

Some of you are using the concept of a calling as a crutch to not fully embrace the season of life you're in, and that is not the will of God for you. You may be called to be a mom one day, but if you're not a mom right now, can you say, "Here I am" to this season? You may be called to own your own business one day, but can I just say that in the meantime the only thing God has ever wanted from you was all of you. The only thing God has ever asked of you is "Here I am". It's what Jeremiah said. It's what Moses said. It's what Isaiah said. It's what Samuel said. When he made himself available, the word of God became abundant.