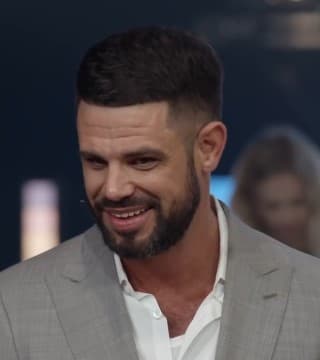 God says, "I see people using you, but they don't know what's in you. I'm going to bless you in this season, even though you have told yourself this is all it can ever be". Do you know how powerful that is, that this is the plot of ground Jacob gave Joseph? It wasn't even supposed to be Jacob the nation of Israel came through. Plot twist. You didn't even get a high school degree. Plot twist. God doesn't need you to be educated… just available, just open, just humble, just a disciple, just committed. Plot twist. He's the God of the plot twist, and I'm going to tell you how I know he is.

Not only does God bless the wrong people from an earthly perspective, like a woman at a well or like a trickster named Jacob. Not only does he bring forth nations from people whose names carry baggage or, in the case of the woman at the well, people whose names we don't even know. Have you ever thought about that? That wasn't on her birth certificate: "Woman at the well". But God said, "I'm going to take characters other people think are just props, and I am going to use them for a purpose nobody can understand".

God is using people in this season who we walk past. I don't know if you want to hear this message or not, because we get pretty settled into our story. We get pretty settled into our situation and our system, and we just want a burger, and we just want a drink, and we just want to survive it. Here we are in a year where most of us just want to go back to how it was, and how it is is not how it's supposed to be. Yet Jacob gave Joseph this plot of ground in Sychar near Samaria. Let me stop here for a minute. This is the area everyone else avoided. It is the area Jesus intended to go through. Jacob was the second-born. Esau was the firstborn. God blessed the second before the first.

"And the last shall be first and the first shall be last". You killed him by hanging him on a cross, but God raised him from the dead. Plot twist. That's all the gospel is. Let the weak say, "I am strong". Plot twist. It may be helpful for me to remind you at this point that the reason I look like I'm about to bust out of this suit with excitement… Not with fat cells, not with cellulite…with excitement and enthusiasm. The reason I'm about to come unglued off this stage is because for 22 years, Jacob thought Joseph was dead.

Do you realize the miracle happened through somebody who was as good as dead? For 22 years… I mean, you have to get in this mindset. Not for 22 hours, not for 22 days, not for 22 weeks, not for 22 months… for 22 years, Jacob thought, "I've lost Joseph". And Joseph was his favorite. Oh yeah. Every parent has their favorite. It might change from moment to moment, but you have a favorite. My favorite is whichever one I'm talking to at that moment telling them they're my favorite. But Joseph had a coat. Joseph was the favorite. Joseph was betrayed by his brothers and left for dead. When they went back and told Jacob that Joseph was dead, who was the first child of Rachel whom he really loved… "Joseph is gone" meant to Jacob "I may as well die too". He said, "You will bring my gray head down to the grave".

See, it was a famine that hit Canaan that made Jacob's sons go and find Joseph. Do you remember this? When they went and saw Joseph, they didn't even know it was him at first, but then eventually, Joseph revealed himself to his brothers and said, "It's me! It's me, the one you left for dead. I'm the one God is going to use to provide for you". Plot twist.

Do you remember his most famous verse in Genesis 50:20? "You meant it for evil; God meant it for good". What does that mean? That means he's the God of a plot twist. That means he takes what the Enemy meant for evil and uses it for good in your life, in your bloodline, in your generation, in our church, in our families, in our nation, in our world, on this continent. God is a generational God. He goes through Samaria, and he takes us through some areas. He does some things in our lives in disappointed places. When Jacob was getting ready to die, he called Joseph to his bedside. It's a really beautiful scene. This is great for Father's Day.

Genesis, chapter 48. He said, "Joseph, come in the room. I want to give a blessing to my grandchildren". Genesis 48:11 is the one I want to focus your heart on for a moment. "Israel said to Joseph…" You're like, "Wait a minute. I thought you were talking about Jacob". I am. The one named Jacob was also called Israel. Jacob means heel-grabber. Plot twist. Israel means prince with God. I'm telling you, Jesus looked at that woman and he didn't see a whore; he saw a worshiper. He looked at Jacob, and he didn't see a heel-grabber; he saw a prince. I love him for that. I love him for all of the times he could have just given up on me. I'm screwing up things left and right as a pastor, as a parent, as a husband.

I know I get it so wrong. But go ahead and clap your hands and praise hand emoji if you know you serve the God of the plot twist, if you know that he knows your real name. Your real righteousness is in Christ. Wow! So, Israel, also called Jacob, said to Joseph, the one he never thought he'd see again, the dream he thought had died, the thing he thought was over…

What is your Joseph? What is the thing you have given up on in your life and you've said, "The story is over, and this is the way it's going to be, and I'm just always going to struggle with this. I'm always going to deal with this. I'm never going to get over this, and I'm never going to get victory. I'm going to sing the words to the song, but I don't really mean them or believe them anymore, because I'm just going through the motions". What is your Joseph? Watch this. "Israel said to Joseph, 'I never expected to see your face again, and now God has allowed me to see your children too.'" He's the God of the plot twist.

"I thought I'd never see you again", Israel said to Joseph. It was the plot of ground Jacob gave to Joseph. Never thought it would happen, but it did. God said, "Get ready for unexpected blessings in unlikely places". Through weakness he is strong. In your crushing, oil comes forth. I know this is from God, because he gave it to me so heavy I had to preach it early. I didn't want to forget how I felt when I read Jacob say to Joseph, "I never expected to even see you again, and now I get to see your children too". God said, "Get ready for exceedingly, abundantly above all you ever asked or imagine". Y'all, just in case you're new here, I'm not necessarily talking about cars or raises or bonuses. God is much bigger than any of that.

Watch this. He said, "Bring them here. I want to bless them". Joseph lined them up so that the oldest, Manasseh, would get the right hand, the younger would get the left hand. They're both going to get blessed, but the oldest gets the bigger blessing. Watch what Israel does. Verse 14: "But Israel…" But God. "…reached out his right hand and put it on Ephraim's head, though he was the younger…" Though he didn't deserve it, though he wasn't supposed to be blessed first, though he wasn't expecting it, though it didn't make any sense, though it defied logic and customs and traditions. He had to go through Samaria. He had to keep you alive. You had to survive. You had to make it. You had to rise up.

"He put his right hand on Ephraim's head, and he put his left hand on Manasseh's head, even though Manasseh was the firstborn. Then he blessed Joseph and said, 'May the God before whom my fathers Abraham and Isaac…'" It's generational. There's a bigger picture. I will not die here. I will not quit here. I will not become arrogant or discouraged or dismayed. I will not stop here. I have to go through Samaria. "…the God who has been my shepherd all my life to this day, the Angel who has delivered me from all harm—may he bless these boys".

Verse 17: "When Joseph saw his father placing his right hand on Ephraim's head he was displeased…" "I don't like this. You're not supposed to be doing this, God. I'm supposed to still have my job. I'm supposed to still… God, this is not…" But look at what his father said. Verse 19: "I know, my son, I know. He too will become a people, and he too will become great". God is going to use it all. "'Nevertheless, his younger brother will be greater than he, and his descendants will become a group of nations.' He blessed them that day…"

I pray that today would be a day of unexpected blessing in your soul, because you never know. You never know. Some of y'all are breaking curses and you don't even know it. You never know. You can't die, Joseph. You can't die. There's supposed to be a well with your name on it for a future generation. Yeah, I want to quit sometimes, but I can't. Yeah, sometimes I hide under the covers, but I have to get out at some point because this is bigger than me. It's bigger than a burger. It's about a harvest. Joseph was betrayed, abandoned. He said, "You intended it for evil. It's all right. God used it for good".