Steven Furtick - God, How Do I Handle This? 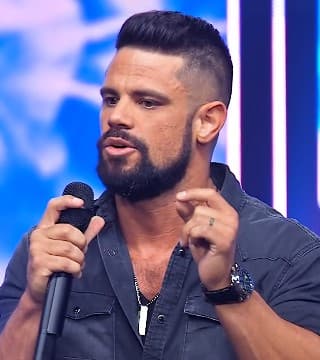 What if is a phrase I like to refer to as fear's greatest hit. I mean, how many things in your life did you not do because what if? How many things in your life did you do that you shouldn't have done because what if? How many nights could you have slept but what if kept you awake? How many mornings did you wake up anxious because what if was your alarm clock? Not just what if. Moses wants to know, "What if…" Pay attention to the next word. "What if they…"? It's a good question, "What if?" and it's where many of us wonder and wander our whole lives. "What if they? What if they laugh at me? What if they don't accept me"?

Now on one hand, Moses is in a hypothetical situation, because he hasn't even done anything yet, but he's just playing out the possible after effects of his obedience. "What if they"? On the other hand, it's not hypothetical at all; it's historical. Moses is afraid of the same rejection he experienced 40 years earlier recurring. Forty years earlier, Moses had killed an Egyptian in defense of his people, and because he did the right thing the wrong way, he ended up on the run. There's something about when you've tried to do the right thing and put your heart in something, but you did it the wrong way, that you don't even want to try again.

So now Moses is asking something that's hypothetical, but it's based out of what is historical. He's projecting his past into his potential, and it's his limiting factor, but God wants him to know, "That staff in your hand…" To us, a staff is a shepherding instrument, and Moses was using it to tend his father-in-law's sheep, but to Moses the staff represented a whole lot more than his vocation. It represented his mistakes, because if he had never killed the Egyptian and ended up a fugitive on the run from Egypt, where he was adopted into royalty, he never would have had the staff in his hand. So when God asks him, "What's in your hand?" it causes Moses to have to reckon with the mistakes he has made that have landed him in the position he's in.

When God speaks to you about your potential, he will cause you to confront your past. He asks, "What's that in your hand"? To Moses it's a staff, but it's also his past. It's also his instrument, the thing he has to do what he's doing. So there's a whole lot happening in this staff, and yet God says, "What you have is what you need". God wanted to say that to a single mom today. What you have is what you need. He put enough in you to raise that child. He foresaw that you would be in this situation, and he compensated for what others didn't give you by putting a resolve and a grit and a determination in you that's more than enough. Everything you need is within reach.

So leave your list of what you don't have alone today. What is that in your hand? The wisdom you need is probably in a book on your shelf that you haven't read. I was talking to a guy who pastored a church one time that was bigger than mine. I said, "I need some advice". He said, "I gave you a book". I said, "You mean that book three years ago"? He said, "Yeah, that book three years ago. Did you read it"? I said, "No, I didn't get around to it". He said, "I knew you were going to be at this place, because I've been there, so I gave you what I knew you would need. You missed it". He said, "Call me back when you've read the book. At least read a couple chapters, and we'll talk. What are we even going to talk about"?

You know, sometimes when you pray and ask God to download information about a decision, "God, how should I handle it"? he's like, "Did you even read the Book"? We've never lived in a time where the information that is in the Word of God has been more accessible to us. My god! They'll send you alarms. They'll break it down for you. They'll give you a Bible reading in a year plan, a Bible reading in the book of Psalms plan, a Bible reading in Southern dialect plan. They'll give you how to read the Bible with your dog in 32 days every morning on your walk with your dog, an audio Bible, a Bible in Braille.

Touch somebody and say, "Grab it". You have to grab it. Joy is there; you have to grab it. Wisdom is there; you have to grab it. It's there. The information you need for the transformation of your life is waiting to be seized by those who will open their eyes to what they've been given. Everything you need is in your reach. It was something he had already in his hand that produced what he needed to move forward into the future to accomplish God's purpose on the earth. I'm moved by that, because I get caught up in what I don't have. I know you don't. I didn't say you did; I said I do. Here's the thing the Lord is teaching me. It's less about what you have and more about how you handle what you have. I'll prove it to you.

That's what God wants to know. How are you handling it? It's not the woman you married; it's how you handle the woman you married that determines whether you get the marriage you want. Now the selection process is important. You can cook better with good ingredients, but I'm saying that somebody might be able to take your same ingredients and make something delicious. It's not what you have; it's how you handle what you have that determines what you do. I found out that teenagers think they're busy. They do. They'll tell you, "I'm busy". "How are you doing, man"? "Oh god, I'm busy". "You're busy"? They're 13 years old. I follow up with a question. "Do you have a baby? Because if you don't have a baby, you don't know busy".

Preach with me. In fact, I want all you busy 13-year-olds… You're so busy. I want you to find a 25-year-old woman in the lobby, one who has a little car seat she's trying to carry on the way out the door from church. Walk up to her and tell her how busy you are, and watch her look back at you and take about the next five minutes to show you that it's not how much stress you have; it's how you handle the stress you have that determines… I'm saying you could do a lot more if you handled it differently. You could accomplish a lot more if you handled it differently. It's all in how you handle it.

It's usually not the things you think are stressing you out that are stressing you out. It's the things you are mishandling in other areas of your life that make you hate your job, or it's the things you're mishandling in your job that make you hate your life at home. So now you come home and take out your frustration from there on them. Because you didn't handle it here, now it's showing up over there. Touch your neighbor and say, "Handle it". You have to learn to handle it, whether it's weights in a weight room or whether it's life.

See, you keep asking God to take some of the weight off of your life, but faith doesn't take the weight off of my life; it shows me how to handle it. How many of you have a situation in your life today, and you want God to show you how to handle it? Just wave your hand if that's you. Well, God is good and God is strong. God is great and God is good, so God told Moses, "I heard my people crying out, and their cry reached me, and I've come down to rescue them". That's what he told Moses in Exodus, chapter 3. He said, "I've seen my people in cruel oppression. I saw how Pharaoh was treating them. I see what you're going through. I see what it's like. I see that you're trying". God said, "I came down, and I'm going to handle it. I'm going to handle this".

Now before you get really excited about it, God has his own way of handling things. You'll be asking God to send all of the people away so they can get some food, and he'll tell you to steal a little boy's lunch and bring it to him. That's how he handles it. You'll be looking at Jericho, and you'll see some big walls, and you'll be like, "God, we need to knock these down. Will you handle it"? And God won't give you a wrecking ball; he'll give you a trumpet, because God has his own way of handling it. You'll tell him, "I don't have anything to pay my debts off of", and he'll ask you, "What do you have in your house"? You'll say, "A little bit of oil", and he'll tell you to go to your neighbor's and borrow jars, and you'll say, "No, that's the problem. I'm in debt. I don't need to borrow anything else". He'll say, "But go to these people and borrow it in the right way, and when you borrow it in the right way, now you're going to get something you didn't have".

I'm speaking to somebody. You're in a situation right now, and God is handling it, and you don't even know it because he's handling it in a cradle. If the cradle isn't enough proof, he proves it on the cross when he defeats death with the very instrument that symbolizes its most violent nature. He doesn't defeat death with a tank. He doesn't defeat death with the sword. He defeats death with a cross, because God has a strange way of handling your situation. He's handling it, and you don't even know he's handling it, because you've never seen it handled like that before. He tells you to turn the other cheek, and usually you're the one turning someone's cheek when they offend you. God said, "No, I have another way to handle it".