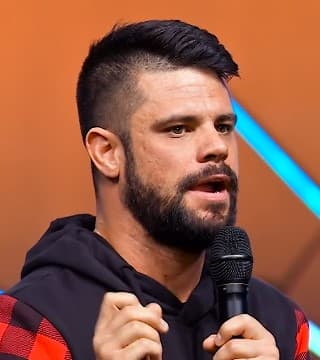 There are some things in your life that God provided, and now they're not there anymore, and you've been walking around worried because you think now you're going to starve, but God said, "No, no, no. It's just a new season". Guess what. New season means new supply. My God. You have to know some things about God's provision. I'm going to hasten to a close, but I have to give you a quick outline. God's provision is seasonal. Everybody say, "Seasonal". Write these down real quick so the next time you're leaving Egypt, and you feel those hunger pangs, and you wish you were back over here, and you feel like, "I don't know what God is doing, and I'm trying to do his will, but I'm gravitating back over here". You can say, "No, Devil. The provision of God is to give me what I need in this season". The day they left, the menu changed.

For 40 years in the wilderness, God promised his provision to the Israelites. He did it in a supernatural way. He rained down manna from the heavens, and they saw it, and they said, "What is it"? Manna. That's what the word manna means. "What is it"? That's what some of y'all said about your husband when God brought him into your life. It took you a minute to realize, "Oh, this is my husband". I think Holly kind of felt that about me the first time. No, I think she did. I was kind of a punk rock guy, and the way I dressed and everything. I had this whole style she wasn't really into. I think the first time she met me, she said, "What is it"?

It took me a while to show her what it is. Hey. Watch this. Forty years. They got so used to it at one point that they started yelling at Moses. They were like, "Man, all we ever get is this manna". Do you know you can become so accustomed to blessing in a prolonged season that you begin to complain about the very thing you prayed for? They wanted something different than manna, manna falling down. Oh, it was sweet too. The Bible says it was sweet. This was not a gluten free food item from heaven's culinary cuisine. They ate it for 40 years.

One day, Jimmy comes out of his tent to gather his manna because that's his job. You know, men have jobs around the houses sometimes. Jimmy gets up to gather the manna, and he's walking kind of slow because of what just happened that I told you about. He's walking out the tent. I was trying to make the Bible come alive for you. He's walking out the tent, still rubbing his eyes, and he looks for his manna, and it's not there. Have you ever shown up to a place where there has been provision for so long that you took it for granted, and it's not there? Sometimes it takes somebody even dying in our lives before we appreciate what they brought. Sometimes it takes losing a job to appreciate employment. They come out of the tent, and Jimmy is looking for his manna.

Now he went from, "What is it"? to, "Where is it"? Come on. Jimmy goes over to Johnny's tent, and he comes over to Johnny and says, "Hey, Johnny, man, the angel got mixed up. I think he dropped off my manna and yours too at your door today. Would it be all right if I…" Johnny said, "No, Jimmy. I was just about to come over to your place and ask you if I can have some of your manna. I didn't get any either". Now, can you imagine the fear if this is the only way God has fed you for 40 years? God has been dropping stuff out of the sky for 40 years, and all you had to do was gather it. In many ways, God will allow seasons of your life where your faith is the weakest to be the most miraculous.

See, now I'm the thrower. I'm not a college student anymore. I don't need that anymore. I don't need that anymore. There was a season. Everybody say, "Season". Holly and I were starting the church, and it was growing, and every restaurant we went in, somebody paid for our meal in Charlotte. Every restaurant. How many restaurants in a row? I think one time we counted seven. It got so predictable that we almost stopped bringing our wallet and our purse into the restaurant. It was awesome. Do you know it has been a couple of years? See, I don't take that like a sign that God doesn't love me. I take it as a sign that now it's time for me to look around the restaurant and see whose meal I can buy.

Come on, somebody. Are you a needer or a need-meeter? Touch somebody and say, "I'm a need-meeter. I'm blessed to be a blessing. I'm made in the image of God. I give encouragement. I give blessing. I'm looking for somebody to help". I'm in a new season. Some of you have been stuck in a survival season where you've always had your hand out, needing somebody to encourage your or serve you, and God says, "In this season, the manna is off the menu. This is your season to learn how to sow and your season to learn how to water. You will starve in your new season if you don't learn how to access your new supply".

That year, they ate the produce of Canaan. Paul said, "I used to get my supply from circumstances, but I have learned the secret in any season is that when I cross over, and the supply I'm used to isn't there, God's leading me to what is next. It's a new season". God's provision is seasonal, and it's unusual. Everybody shout, "What is it"? God hides his provision for your secret needs in unexpected places. Ask Naaman who had leprosy. Are y'all bored? You may be praying for wisdom and walking right past the source of the wisdom. There may be a little boy who has your five loaves and two fish, and you don't even recognize him because he doesn't seem important to you.

Naaman had leprosy, and it was a little servant girl from Israel who told him to go to Elisha. If he had ignored that girl, his hidden needs would have remained unmet because he didn't know how to look for God's supply in unusual places. "Elijah, go to the brook at the Cherith ravine. There, I have ordered the ravens to feed you. You're not going to get it in this season from the places you expect". God said, "I'm going to bless you in this season in unusual ways, in unexpected ways, through people you used to discount. I'm going to give you wisdom. I'm going to give you supply, but stop walking by your supply because it looks like a seed".

God stores his provision in unusual places. I can't understand why men don't listen to their wives. If anybody is going to help you avoid disaster, wouldn't it be the one who has invested their life in your success? I thought a women's conference shout might break out right there. Some of you women are missing your husband because you're looking for a body type. God might give you a good man who doesn't have a six-pack. Hello. His supply is going to be seasonal. It's going to be unusual, and it's going to be proportional. God is going to give you what you need for this season. Whatever manna they gathered that they didn't eat that day, it went to waste. It spoiled. They couldn't eat it. Why? "Give us this day our daily bread. Give me this day my daily bread".

Do you know why some of you have ulcers? Because you're trying to fight tomorrow's battles with today's strength. God said, "I'm going to give you what you need. I'm going to supply all of your needs according to my riches, but I'm going to measure it out according to your need, and I know what you really need". I have learned in my life not to ask God too much for an opportunity because I might get more persistent than I am ready. If I get more persistent than I am ready, I'll have weight on me that I was not built to carry in this season. I learned how to worship God for what he gave me and for what he withheld from me. He will bless me in a way that is proportional to my purpose. Am I teaching well? Is this getting down deep in you?

Elisha asked the woman in 2 Kings 4, "What do you need"? She said, "They're coming to take my sons away, and I don't have anything to pay. I don't have anything to give them". Elisha asked, "What is in your house"? That means God's provision is local. That means God's provision for your life is within your grasp. He didn't cut off the manna until they were close to Canaan. God's provision awaits your next step of faith. Please receive this word. I'm not preaching this just to be entertaining. I'm not preaching this just to be your hype man. I'm trying to get you to see that often, we overlook what is right in front of us in praying about what is ahead of us. God, help me see the supply you've put in my life through new eyes. Maybe it's not that I need God to give me something I don't have. Maybe it's that I need to learn how to use what he has already given. You have it. You have it in your house. You have it in your heart. You have it in your grasp. It's provision.