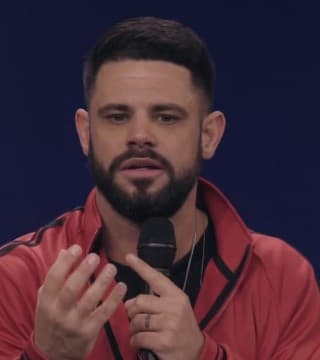 God looks for exactly what he wants. I don't mean to get biological, but he fertilizes the right egg at the right moment. Do you realize the percentage chance of you being born when you were born to do what you do? And you're going to walk around in self-doubt trying to figure out if God chose you? You ought to know God chose you, you ought to believe God chose you, and you ought to go through your life with your head held high no matter what is in your bank account because you're chosen.

Eric used to always tell them, because they would make fun of him for being adopted when we were in high school… He'd say, "My parents picked me; yours got stuck". That shut them up real quick too. My Father picked me. He wanted you on the earth right now, and he wanted you short or he wanted you tall or he wanted you to have experienced this set of circumstances or the other, and he got what he wanted. He called what he wanted. Beautiful. Let's stay in it for a moment. Sometimes we rush past stuff too quickly. Don't come to me once every four weeks and then wonder why you don't get any stronger. I'm going to need you to come regularly so we can build on this.

Then we can get it in with repetition and talk about the kingdom of God. It's always invisible to the human eye, it's always insignificant to the human mind, and it is always immediate. It's right now. The kingdom of heaven is at hand. That was the first message Jesus preached. He said, "Repent…" Change your mind. Metanoia in the Greek. "…for the kingdom of heaven is at hand". When he established his kingdom, he chose certain candidates, and he chose twelve. He appointed those he wanted. He made you her mom. He made you her daughter. He put you in that. He let you have that, because he believes in you that much. He called those he wanted. And who did he want? "Simon (to whom he gave the name Peter)…"

Do you know another thing about people? (I'm getting into the second week already.) They will celebrate a talent or a gift but not effort. Because we're crazy. We need Grammys and Academy Awards and compliments from people who are insecure themselves, and then if they don't give us a compliment, we don't think we did anything, but it's their insecurity that kept them from giving a compliment, not anything deficient in us. People don't know what to celebrate. Even in a good sermon, people clap at the wrong times. When Jesus was choosing, he chose on the basis of something he could see that they couldn't.

So the Scripture says he chose Simon, to whom he gave the name Peter. He liked to nickname people. Everybody in our family has a nickname. I don't call any of my kids by their real name. They don't even call me "Dad"; they call me Moch. It's a long story. I don't have time to explain it. Jesus started that. He called people stuff that he knew they were that they didn't know yet. He'll call you righteous while you're still struggling with addiction. He'll call you an influencer when nobody else knows your name. He will call you great when the world will trample over you to get what they think is great. He called those he wanted, and he called them to be with him. And when he called them, he called Simon, and he said, "You're Peter, Petros, rock. You're something I can build on". Then he called James, son of Zebedee, the one from Matthew 20. Remember? He chose him and his brother John.

You may recognize him, because he had a whole gospel called John. He wrote the gospel of John, and he always called himself "the disciple Jesus loved". That's not what Jesus called him. Look at what Jesus called him. "…James son of Zebedee and his brother John (to them he gave the name Boanerges)…" That's Greek for hot-tempered. It also means disturbance. He called them that, and then he still chose them. Who in here struggles with something, like a temper or an issue? I swear your wife is going to raise your hand for you if you don't get it up real quick. I'm trying to spare you some embarrassment.

How many of you struggle with something? God can look right past what people trip over and say, "Come on. Go with me. We have a job to do. I know you don't see it, I know you don't feel it, but the kingdom of God is at hand". Yes, Lord. "…Boanerges, which means 'sons of thunder'…" That's a nice translation. So these boys follow Jesus for three years. They left their father's fishing business, which was successful. I know it was successful, because when he called them, they had hired men helping them. Zebedee, their dad, had servants on the boat. So they left something where they had servants to become servants. Kingdom clout, when you stop worrying about what looks good to people because you want to be right with God. Kingdom clout.

We need this message. Our children need it. We need it. We're still teenagers, dressing for everybody else, spending for everybody else. They're not there to pay off the credit card, and they didn't even notice we wore it. Jesus said, "What do you want"? Now, remember what they've seen. They've seen miracles. They've heard sermons. They've seen his compassion, and they've seen his (How should I say this?) other side, when he flipped over the tables in the temple because they had started making it about clout rather than kingdom. He didn't like that. He didn't like that exclusivity where it's like, "These kinds of people are the people God can use and these aren't, because they're this and they're that".

He didn't like that, and he taught them and showed them. But then just before the last week of his life, James and John and their mom come to Jesus. They're like, "We want you to give us VIP seating in the kingdom". At least that's how I always read it, but I realized something. It wasn't just important what they asked for.

Listen to me. You can't understand what they ask unless you understand when they asked it. In the verses just before the verses I read you, where this mom comes up to Jesus and kneels down and says, "I want my boys to be okay", he had just, for the third time, told them about his death. They didn't want to hear it, because it meant that in order for God to bring about what they wanted him to bring about, they would have to go through what they didn't want to go through. When he talked about the cross, he did it in dramatic language, but they couldn't hear it. They didn't want to hear it. They rejected it. They rejected that message because it did not fit with their expectation of what the kingdom would be.

When God does something in our life that does not conform with our expectation of how we wanted him to work, we will tend to reject it. When someone God wants to use is raised up in our lives… We don't really have different values than the world, because we think that in order for the gospel to go forward we need celebrities to get saved. That's the kingdoms of this world, not the kingdom of our God. God calls the known and the unknown. I need to preach this message, because just Friday, I went to Cheesecake Factory. It has been a minute since I did that.

One reason I quit going is the menu gives me a panic attack. It's so big. Do you all remember Encyclopedia Britannica? The menu is like chapter 7, verse 3, on the… We're talking about choosing. You have options at Cheesecake Factory. Seventeen different kinds of ways to die early, and all of that. When we finished eating, we were sitting there a moment, and I was telling Elijah, "Kingdom clout. I'm so excited". He was like, "Me too. It's going to be awesome. What's going to be the first message"? The server, not the one who had taken care of us during the meal but somebody I had noticed a few times… We both talked about it. He just had something special about him. Both of us noticed. He came over and said, "I don't want to disturb you, but this meal… I've been the whole time… Thank you". He said our messages have helped him, encouraged him. Somehow he thought that would bother me to tell me that.

I was like, "Oh, man. Thank you, man. That means the world. It really does". He went to walk away. He was like, "I don't want to bother you". I said, "No, come here. What was your name"? He said his name. He said, "My name is Mike, but I'm nobody". I said something to him just to say, "No, man". Then after he left, I told Elijah… I was like, "That's why I have to preach this". Because most everybody feels that way. Play me off if you want to. I know that's the same thing you walk around telling yourself. "I'm nobody". You all will have the nerve to say stuff to me like this.

One woman in the church said the other day, "I'm just a stay-at-home mom". If you ever say something like that to me, I will find the nearest Elevation pen and throw it at your forehead like a Death Star. Stop saying stuff like that. You are just a… What? If you are a stay-at-home mom, let's do the math. You are a doctor, a lawyer, an Uber, a UFC referee if you have more than one of them. I'm not just a nothing! (That wasn't good grammar but it felt like God.)