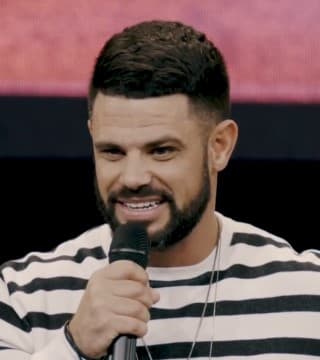 I'm preaching today to somebody who is in a transition in your life that is significant. It is the most significant place of opportunity, and it is the most vulnerable place of insecurity…at those points of transition. Maybe I should show you in the text. Go all the way back up to Acts, chapter 3, verse 1. Let's look at it. "Now Peter and John were going up to the temple at the hour of prayer, the ninth hour. And a man who was lame from birth was being carried, whom they laid daily at the gate of the temple called Beautiful to ask alms from those entering the temple".

Everything I just said is transitional. Every single component of the verses I just read has a transitional element. When I saw that in the text, I was like, "This is perfect for what we're trying to understand in our lives", because our lives are constantly changing, and they are changing so fast that by the time we recognize the change, we don't have time to make the adjustment. By the time we know how to be a good parent, they are 53 years old. By the time we know what we should have saved money for, it's too late and the bill is already overdue. By the time we get the wisdom, we don't have the strength to implement it because we're tired from all of our dumb mistakes.

So, when I read it, I realized everything is transitional. "Now…" It's a transitional word. "…Peter and John were going up to the temple…" They were on the way somewhere. "…at the hour of prayer…" It was a transitional time. They're going about their day, and now it's time to pray. Ding! Ding! Ding! Everybody to the temple. Peter and John are transitioning to the temple. They are transitioning in their ministry, because up until this point they've always had Jesus in human form to supervise their miracle-working attempts and efforts. Sometimes they didn't get it right and he was there to correct them, but he's not here in human form anymore and they are in transition. So now they're going to church at 3:00 in the afternoon (that's what the ninth hour means). It's a transitional period where all good Jewish men and women would go to the synagogue for prayer.

Peter and John are moving toward the temple. A transitional period for the church. A transitional moment in their day in between two activities. Then it says in verse 2 there was a man who was being carried "…whom they laid daily at the gate of the temple that is called the Beautiful Gate". So now the church as a whole is in transition as the Spirit of God is beginning to manifest himself through signs, miracles, and wonders through the hands of the apostles. Peter and John are in transition on their way to the temple, which is their daily routine, and there's a man who the Bible says is being carried. I don't know how I missed this for so many years. I always pictured this miracle with the man already lying beside the gate, but he wasn't at the gate yet. The Bible says he was in transition. He wasn't even in the spot yet.

See, if you were going to make it and you couldn't walk, you had to have a racket. So the best place you could go was to pick a spot while people are going to church, and they would do it differently. They wouldn't get you on the way out, because you already gave an offering in church, so they would get you on the way in. If you can catch them on the way in, maybe they'll drop you some change. It was considered piety to give alms. So they're catching people with a gift shop at the gate by the temple. He wouldn't have been the only one. This was a very common place to set up. I was blessed by this, and I thought you may be too: he wasn't even in his spot yet when God decided to give him a miracle.

Here's what I wanted to say: God is going to bless you on the way. God is going to bless you. He's going to meet you and cut you off on your way to your spot and bless you anyway. How many know God can cut you off and bless you? He was about to go into the gate. What is a gate? It's a symbol of transition. Everything in the text is pointing me to the fact that God is most active in moments of what I perceive to be instability and transition. I feel the Holy Spirit all up in your stuff, because there's something you're trying to get through, but you don't have to wait to get through it; you can believe God right smack dab in the middle of it. It sounds good, preaches good; it doesn't feel good. It's so weird how we ask God to change our lives, and when he really does…

In the same way, every time God is moving you forward in your life, there will be a period of transitional instability. In this passage, the man has never walked before in his life. He's being carried to the gate. Peter and John are going to church, and in transition, God sets up a moment for transformation. When it happens, it's so shocking not only to the onlookers and not only to Peter and John who were just trying to get to Sunday school. This is important too. Can I throw this in? The first miracle that is recorded in the book of Acts was waiting in something everybody else was stepping over to get to something they deemed more important.

Let's look at it. This man is on his way to his spot. Peter and John are on the way to church. Studying the Bible, how many things happen on the way; how active God is in the journey, in transition; how many things God uses to change our lives happen in between two fixed points that we deem important. Just all of the little places Jesus would stop and do a miracle. You know the feeding of the 5,000 was not on Jesus' itinerary. He was just trying to get somewhere else, and there happened to be 20,000 people who wanted to hear him teach.

Verse 4: "And Peter directed his gaze at him, as did John, and said, 'Look at us.' And he fixed his attention on them, expecting to receive something from them". I always like to say he was expecting the wrong kind of change. He wanted to know, "Do you have a few quarters? Do you have a few dimes"? The one thing I've learned about Jesus is sometimes he doesn't meet your expectation because he wants to exceed it. Don't be too disappointed if God didn't give you what you wanted. This man in this moment is about to receive a change he didn't even have the faith to ask for. God sets up at his spot, the spot where he was just going to beg and get through another day and some change, some spare change. Peter is like, "Oh, I've got change for you".

See, this is a transitional moment. Remember that Jesus said, "If you ask anything in my name, I'll give it to you". His name represents his authority and his power. When Peter said what he said next in the next verse, "I have no silver and gold, but what I do have I give to you", at first, this man is thinking, "Oh, another one of those Christians who leaves you a tract and doesn't leave you a tip at the restaurant". (That'll send you straight to hell, by the way. If you don't tip your server 20 percent, don't come to Elevation Church. Twenty percent if they spit in your drink).

Peter is saying, "Now look. Let's get past what you expected. Let's get past this temporary change you desire. I have no silver and gold, but what I do have… I have a name. It's not my name, because in my name you get nothing. In my ability, there is limited strength, power, and resource, but I know a name, and the one who has this name gave it to me. So I'm not operating in my own authority…"

This is the transition of power. Jesus said, "If you wait for my Spirit, you can receive my power. If you don't get out and move the way you think you ought to move but wait for me to direct your path, if you will be in position, you can receive my power". "'In the name of Jesus Christ of Nazareth, rise up and walk!' And he took him by the right hand…" By the right hand. That's the hand of authority. Why the right hand? Because all power and authority was given to Jesus. God said, "I'm standing over your situation, presiding and prevailing".