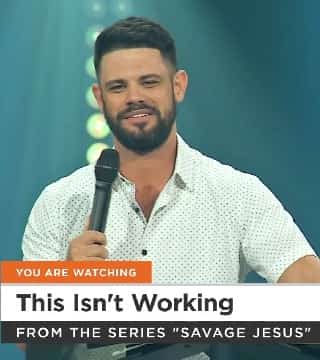 Have you had anything in your life lately that doesn't seem to be working? I mean, maybe it worked at once. I'm not talking about a washing machine or something like that. I'm talking about real stuff like a relationship. That sounded fresh. It really takes courage to admit that a relationship isn't working. Especially if it feels comfortable to you. I preached one message called dysfunctional comfort and how that sometimes it's easier to stay in familiar bondage than it is to embrace uncomfortable freedom.

So to admit that it's not working, requires a certain amount of courage. To say it used to work or it may appear to others to be working, but this isn't working. Just coming to that point alone can be difficult from time-to-time because, sometimes, we don't really know if it's going to work if we keep doing it. If we just need to give it more time, and it will work. Which is typically what we preach. Just keep trying. Just keep moving. But I've been to the gym and the way that some of us work out, we can keep working out until the rapture and it will not work. Not the way we're working. Our form is off. We take more breaks than we do reps. Yeah, this isn't going to work.

That's what my 12 year-old, my man Elijah, the one that I raise and pay for, he was saying the other day, he's starting to try to lift weights. So we put him on a little program, didn't we Buck? After two days, he came to me and said, "This isn't working". He wants pecks real quick and what he didn't understand is process. Touch somebody say, "No process, no pecks". Or, if you don't wanna tell 'em that... That's really weird. What a cringy touch-your-neighbor. Now listen to the Bible. Bible says, "Another time Jesus went into the Synagogue, and a man with a shriveled hand was there..". — and there were some people there who were "...looking for a reason to accuse Jesus".

Now I'll stop there because what we have in this passage is a — Let me see how I want to say this. A failed system and a frustrated Savior. Really, what bridges the gap between the failed system and the frustrated Savior is a man who is there that day. The Bible calls him this, Mark calls him this, he says: "He was a man..". Verse 3. "...with a shriveled hand". In verse 1, they're announcing his presence in the Synagogue. It says, Jesus, Who is the most important person in human history, was in the Synagogue and a man — I'm expecting for it to be: "...and a man with a hundred-million-dollar net worth..". I'm expecting, if we're gonna take time to call this guy out by name it would be a man with a Grammy. Or it would be a man — You know what I'm saying? With a contract to play in the NBA. But yet, when Mark gets ready to call the roll for who was in attendance that day he does not mention a man with a BMW, a Mercedes, or a Maserati.

He mentions a man with a situation that could have and should have prohibited him from being there in the first place. With this kind of deformity, it is likely that he would've been excluded from Synagogue worship. The good thing is, he only had a deformity in one hand. When you have a deformity in one hand, that means you can shake hands with your good hand while you hide your bad one. Yet, much to this man's chagrin it must've felt like a nightmare when Jesus called him out in front of anyone, stood him up, and used him as an object lesson. Really to say that sounds cruel, but Jesus will always use your situation to fix the system that created it.

One thing I'm grateful for that I learned from Paul who wrote a lot of the New Testament letters. He taught me that it is a theological impossibility for my situation to separate me from God. It's a wonderful list that he gives us in Romans 8 if you're ever inclined to read it. If you're having one of those days where you find yourself in a situation that you don't feel God, sense God, or maybe even believe He's there. Go to Romans 8:35 where you will find a list of situations that cannot, will not, may not, do not have the permission or the power to separate you from God. So Paul makes a list, and in his list, he starts with trouble. It's almost like he's picking a fight. He says, "Who shall separate us from the love of God"?

And watch this clause: "...nor anything else in all creation... See, there Paul gets it. He wants to close it all in. Name a situation I can point you to a grace that is greater than your situation. So then, I don't care what you did, what they said, what you lost, what you don't have, where you've been, or where you're going. It is impossible for your situation to separate you from your source. Now shove somebody and say, It's not my identity. It's just my situation. This man has a situation, but his situation is not him. Somebody went through a divorce, but a divorce is not you. Somebody is dealing with an addiction, but the addiction is not your identity. We know this because Mark calls him a man with a shriveled hand. Not the shrivel-handed man. He's a man with an issue, but the issue is not the man.

Y'all don't wanna help me preach at all today. Situation. But the real situation in this text is not the man's hand. It's the people's hearts. Did you notice that? It's one thing to have a bad hand... especially in Vegas. But when you have a bad heart... And so, what I saw when I was reading this very familiar text that is simple on the surface, was a depth of understanding of five things that Jesus came to fix. Now, He's going to fix this man's situation. You saw it.

When you run around fixing situations all day, you actually disempower the decision-making ability in your organization. Because it's one thing to know when something isn't working. A lot of people are good at that. How many know that it doesn't take a genius to see when something isn't working? All it takes is a Facebook account. And you can spend your whole day telling everybody who doesn't care what's wrong with everything that you dunno how to fix, either. Good thing I brought my own Holy Ghost today 'cause y'all ain't givin' me no love.

See, we always want to point fingers at situations, but you might just find that the situation you're pointing at is trying to alert you to a system within yourself that God wants to deal with because God is not a situational God. God is a God of systems. God is a God Who gets to root causes, so, He went to the Synagogue, which was their system of worship, and He went on the Sabbath, which is their day of rest. He found a situation, and He stood it up in front of everyone, and He used the situation to fix their system.

The first thing that He has to fix is their pessimism. There are five of these. Will we get to all five? Who knows? But I'll be here next week. She said, "Me, too". Pessimism is the result of considering your situation before you consider your source. It's what makes you look at your life, and feel so overwhelmed by all your situations. And I'm guilty of it. I'm gonna be honest with you. I'm guilty of evaluating my situation without considering my source. And when I do, I always feel overwhelmed. You will notice that there were some there that day who were actually, verse 2, looking for a reason to accuse Jesus. They were looking for something wrong.

So it causes you to look at people and situations, and think, "It can't get any better 'cause it's always been this way". But Jesus said, "Stretch out your hands. I came to speak a better word and fix what you say within yourself". "Nobody likes me. Nobody talks to me. Nobody goes out with me". Why are you surprised when they fulfill your prophecy? "Well, they always... and they never..". There's a second thing that Jesus came to fix. Is our prejudice.

And every day that you and I wake up we have an opportunity to witness resurrection power all around us. We get to witness it in the lives of others and we get to witness it on our own behalf. We get to be a witness, but you can't be a witness if you insist on being a judge. What I'm trying to say is this, have you already made up your mind how God can bless and who God can bless, and when God can bless? Have you already made up your mind about how God can do it to the extent that you miss that the very Author of life is right in front of you? And they are trying to kill the very thing that God sent to save them. Why? Because they've already made up their minds.

We pray for wisdom and God tries to send it through out wives, but we are prejudiced. We pre-judge the people that God sends to help us. So rather than accept the wisdom, since we don't like the truck that it came in, we'll send back the wisdom, 'cause "She's always like that". Well she's the one that God might use to show you your system. This whole chapter is worth preaching. I wish we had all week.

Alright, touch your neighbor, say, "Fix the system". Fix the system. They were lookin'. I see it sometimes. I see people who look like they came to church as a favor. Or, like a last resort or somethin'. Like, will you stop asking me if I'll come once? Man, they are looking for something not to like. Sometimes, you can feel the energy of somebody where it's just like, "Hmmm..". And they will miss a revelation 'cause one of the worship leaders had a rip in his jeans. "I just don't know if...". And God was trying to show you And God was trying to show you how holy is — You missed it.

Looking for a reason. Looking for a reason. He was a threat to them. So they already made up their mind. They already had their verdict and now they just needed to collect the evidence. It's called confirmation bias. When you wake up believing God is for me, you look for evidence to support that verdict. When you wake up believing that all things work together for my good and that nothing can separate me from the love of God, here's how good it is. When you believe that, when you are looking for a reason to rejoice, rather than a reason to accuse, it causes you to weigh things differently.