Steven Furtick — Danger In The Distance 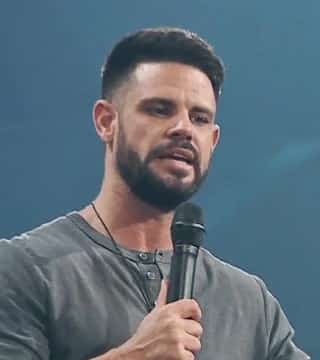 (Part 1) Here I am, Lord! I'm a man of unclean lips and I live amongst a people of unclean lips, and You can see in my skin that on the surface I'm defiled, but I have more faith than a lot of the people who have perfect skin. I heard that You could heal, and I'm here, and I know I'm not supposed to be here, and I know they could kill me for bein' here. And if You are who I've heard You are, You are the Holy One of God, and Your holiness and my unholiness do not belong in this same vicinity, but I'm here. I took 50 steps to get here that I wasn't supposed to take, but I'm here. I'm completely out of place, but I'm here.

It wasn't the 50 steps that got him healed, it was the next thing he did when he got there. "A man with leprosy came to Him and beg: I'm here, and I'm humble. It wasn't those first 50 steps that got him healed, is was the 51. You can come all the way to church and not get healed, 'cause you won't get it like this. But if you will humble yourself under the mighty hand of God, and hit your knees in your heart, and let God know, I don't want to be my issues anymore. I heard what You could do, and if You will, You can make me clean. I know You can, I'm just not sure if You will.

See, intimacy is risky. For Jesus to touch this man, it put Him at risk of catching what the man had, and He touched the man. He touched the man. Some of you won't even high five your neighbor in church without hand sanitizer, and Jesus touched the man, "It's flu season". He touched. You can't do that, Jesus, because according to Levitical law, if the unclean touches the clean, the clean will become unclean. Jesus said, "I did not come to abolish the law, but to fulfill it". See, when that which is perfect has come, that which is imperfect will be done away with.

God, that made me happy when I read it! I thought about how He is not ashamed to be identifying with me! How he's not worried about catchin' what I got! But if I get close enough to Jesus, His righteousness will rub off on me! Now, high five somebody and say, Catch this! Catch grace! Hey, announcement — grace is contagious! Praise is contagious! For all of y'all who are sittin' next to somebody who doesn't want to praise God, I dare you to break out and sneeze on 'em, until your whole row is praising God! Come on, Blakeney, I need three people in the center section. Praise is contagious. "Oh, magnify the Lord with me, let's us exalt". Touch everybody you can reach. Say, grace is contagious.

Who's got an orange Elevation Bible? You got one? We gave away, like 19.000 of these to people who made a profession of faith or rededication in Christ We study the Bible like this. Yep, see, this one we gave you. This one is the one I wanted to show. They translated it from Greek, and sometimes the language, there's a distance between culturally, how they saw certain concepts, and how we see certain concepts. And when we say "grace", it's a soft term. But when the Hebrew mind thought of grace, they imagined grace coming from the same place that anger came from. It all came from — I'm gonna teach you a word.

You got any friends who make fun of you for comin' to this church? Break this out on 'em at lunch today — "splanitsomai". Yeah, just say it with confidence. They won't know if you said it right, just say, in the Greek — tell your neighbor, in the Greek, it's "splanitsomai". And here in this translation, which they did in 2011, an IV translation committee, they did it a little different. They said Jesus was indignant. And in '84 when they got together to translate it, according to the same protocol of translation, they put it as — put the other one up there again if you can in the back — compassion. And then when they translated it again, they said, no, it should be indignant, angry, furious, frustrated, annoyed — indignant, undignified.

Which one is it? Was He filled with compassion, or was He indignant? Yes. Yes. He was filled with compassion and He was indignant. It came from the same place, "splanitsomai". It means the guts, the bowels, the place where you really feel it, which becomes much more meaningful when you remember that the first sign of leprosy is that you lose feeling in your extremities. And now this man, who has lost the ability to feel and who has gone numb, is touched by a Savior who can feel for him. This is where Christianity is different than every other world religion. This is why we're not just one in a list, because we have not a High Priest who is unable to sympathize with our weaknesses, but He is able to be touched with the feeling.

And you know what happens in life. We go numb, especially in this age of information, where we are expected to process all of the events all at once. The good ones, the bad ones, we can't feel it anymore. When you go numb, you can get hurt and not feel it, and you can die of a small cut that becomes infected because you do not feel it, and you don't know it needs healing, because you do not feel it. Has the enemy made you go numb to the point that you no longer feel "splanitsomai"? Jesus felt for the man.

The religious system had gone numb. The religious system, when Jesus healed a man with a shriveled hand one chapter later in Mark, they were worried about which day He did it on. They had gone so numb that the only thing they could think about was He broke the rules. But Jesus, who is the righteousness of God, looked at this man with compassion, and He looked at the shame that the man carried with anger — "splanitsomai". And Jesus, looking at the man's condition, breaks the rules, makes a move. He feels for the man. He touches the man. He touches him, because He feels for him.

Why was He angry? He wasn't angry at the man. It wasn't the man's fault he had leprosy. Maybe He was mad because He knew that the man was gonna do exactly what He told him not to do. Did you catch that part? In Verse 43, "Jesus sent him away at once with a strong warning". Again, the English is weak. It's weak. It's not wrong, it's just weak. It means Jesus charged the man with a flared nostril. That's the picture. Look this up on Google. You will see it. One scholar said Jesus snorted. Now, I know you don't like snorting Jesus, you like snugging Jesus, but Jesus snorted and told the man, don't tell anyone what I did to you, because if you tell people, it will prohibit Me, because they will just want Me to do for them this kind of miracle, but I've got to do what I came to do, which is die for their sin.

And Jesus had that Marty McFly thing goin' on, you know, that "Back to the Future". He knew that the man was gonna do exactly what he told him to do, but He healed him anyway. He knew you would still struggle with sin, but He saved you anyway. This is so powerful. I need to hurry up. Touch somebody and say, He did it anyway. He knew that even though my chains would be broken, I would still struggle with the remnant of my sin, but He did it anyway. And Jesus told the man, don't tell anyone, and the man went and told them anyway.

Now, I could preach that a couple ways. One way would be, when God has touched you and healed you in ways that no one can, you can't keep it to yourself. No one will have to train you to evangelize, you will just naturally tell somebody — He changed me. In fact, your life will be like product placement. People will start asking you, what happened to you? And you'll be like, come see a Man, who told me, come see a Man, who wasn't ashamed to touch me! Don't just come to church with me. He went and told everybody what he wasn't supposed to tell, and the Bible said because he did — this is so beautiful. That "Jesus", Verse 45, "could no longer enter a place openly". You see it? Did you see it? "But stayed outside in lonely places".

When this story started, the leper was in a lonely place. But by the time it was over, Jesus was where the leper belonged. Here is the gospel. He did not just heal the man's skin, He took his place. And that's why I praise Him, not just because He gave me a good parking spot, not just because my family always went to church, not just because I feel guilty, but because He took my place! Somebody shout, He took my place! See, the Bible says the leper came to Jesus. I beg to differ, because in the fullness of time, God sent His Son to be born of a virgin. The leper didn't come to Jesus, Jesus came to the leper! I want you to know He sees where you are! He knows what you struggle with! He is not ashamed to come to you! Somebody give Him praise!

He didn't just heal my issue! He took my place! Now the leper can go in, and Jesus must stay out. "And He became sin who knew no sin, that we might become the righteousness of God". This gospel I preach has the power to take away your guilt and your shame, but you've got to get in position, my brother, my sister. You can't get this grace until you're willing to bring yourself into submission. If you will, you can. You see, I'm weak. I heard You were strong. Will you do it for me, God? On the inside? I don't just want my screen to be shinier, I want you to touch me on the inside. I want to feel again. I want to feel again. I want to return to my first love. I want my lamp to burn again with holy oil. Will You touch me, Lord? And Jesus reached out, touched the man, and the shame was gone.