Steven Furtick - Remember Who's Fighting For You 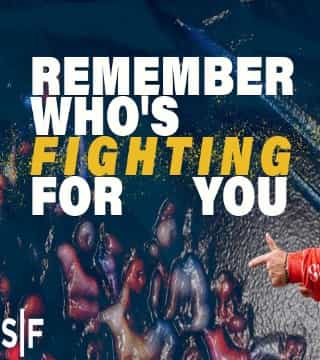 This is an excerpt from: No Weapon
Do you know where your weapons are? A lot of people don't. They just accept depression. They don't know how to worship. I'm not saying I don't feel depression. I'm saying I don't accept that as being my new default setting and the limitation of my life. We have addictions. We all have addictions. "Not me," as you scroll. You are delusional. Yolanda, I started by calling this sermon No Weapon. There were no weapons with the Israelites because there were no blacksmiths. All of the ways the Enemy kept you from getting what you should have had, and all of the ways he wants to use what you think you should have had that you don't have to keep you from doing what God called you to do…

That was my message, and it said there wasn't a weapon in the hands of Israel. In the hands of Israel, that's true, but guess who did have weapons. The Philistines. They had weapons. They made weapons. They had the monopoly on metalmaking, so they were fully weaponized. That's just the way God wanted it. I'm about to show you something that blew my mind. Oh, I hope it blows your mind, because while you're sitting there thinking about what you don't have that God didn't give you… You know he has given you all things richly to enjoy, and he has given you forgiveness of your sins and salvation through the blood of his Son…all that.

"I don't have any weapons". You have the Holy Spirit, the mind in Spirit, which is life and peace, to show you everything, every good and perfect gift. "I don't have any weapons". Y'all, I remind myself of the older brother in the prodigal son story, sitting in the father's house talking about, "You never gave me a goat. You give your other son, the one you really like, the goat. You don't give me a goat". The father is like, "You're always with me, and all I have is yours".

This is not about resource; it's about recognition…recognizing what you already have, recognizing who you already have. "Everybody left me". Not everybody. Not everybody is gone. Not everybody is flaky. Not everybody is a Judas or a betrayer. I love how Jonathan moved toward what was too big for him with what he had. Go with what you have. If it's one armor-bearer, go with what you have. If you are already past the point in your life… See, Saul didn't have to stay under the tree either. Saul had a weapon. At the end of his life, he fell on his own sword. The weapon Jonathan won with Saul killed himself with. It wasn't about what they had; it's about what they did with it.

There is somebody on your row who went through a divorce and lived through it and learned from it and moved forward, and it did not make them… I'm telling you, it hurt them. It was hard for them. They wished they never would have had to go through it. They wouldn't wish it on you, but they made it through it. It is not what happens to you that defines you. Do you need me to turn Yolanda loose with the microphone? Did you hear what she went through? And did you see her worshiping? Some of us didn't worship because we didn't get to park close enough. They were saying all of these things she went through, and she's still worshiping. You must have read all the way to 1 Samuel 14:20. I'm not sure if you did, but something tells me you did. In 1 Samuel 14:20, the Bible says that when Jonathan moved toward the enemy with his one weapon…

Look at what God did that Jonathan could not do. You've been looking at what's against you, forgetting what's for you, forgetting who's for you, forgetting who's in you. When Jonathan moved forward in the strength he had, with the sword he had, with the partner he had, with the resources, the wisdom, the plan he had…not the one he wanted, the one he had…watch what God did. The Bible says, "Then Saul and all his men assembled and went to the battle. They found the Philistines in total confusion…" "But we don't have any weapons". But your enemy does. When they got to the battle, guess what happened. The Philistines, their enemies that had kept them in hiding, were striking each other with those iron swords. I just picture the Philistines sharpening their swords, not knowing their swords that they were sharpening were going to be the very instruments of their own demise.

I want the Devil to know that no weapon formed against me will prosper. No weapon! The Devil has been busy, hasn't he? He has been trying to defeat you and discourage you and get you depressed, and he's sharpening the swords. He planned the attack, and he thought, "If I hit them here, if I hit them there, if I cut them off here, they'll stop coming". What he didn't know is the weapons may be in the hands of the Philistines, but the Philistines are in the hands of God. When you move toward what God has called you to, you will be surprised, and maybe the very weapon you thought was going to kill you is going to be the one God is going to use to save you. There it is. That is the prophetic word. You've been praying. You've been asking God to show you something. Some of you have been asking God to confirm, "Why am I going through this? Why is this coming against me? Why can't I get past this? Why can't I move through this? Why didn't I have someone to help me with this"? God said, "I wanted to show you what I could do".

So, the thing the Enemy sharpened to kill you is going to be the thing God uses to save you, if you move toward. If you sit under the pomegranates, your faith will surely weaken. If you move toward the Philistines… I'm talking straight into the face of your fear, straight into the face of what's fighting you, in the power of God. The weapons we fight with don't come from the world. I see Isaiah 54:16 in a new light now, where God said, "Behold, I created the blacksmith who blows the coals in the fire, who brings forth an instrument for his work". Your enemy is God's instrument too. He uses all of that.

I came to talk to somebody who is down to one weapon, one person, one word from God. You're moving toward some Philistines today. Who are you? Wave at me. The Lord said to tell you: the promise of Isaiah 54:17 is that no weapon formed against you will prosper. Not that it won't be formed; it's just that it won't work. The enemy was killing the enemy. The swords they sharpened to kill the people of God… When God moved, they started… I see your enemies beginning to scatter today. I see your enemies fleeing from you seven ways today. I like to picture what the Devil thought when he was prompting the heart of Judas to betray Jesus. "Oh, this is going to end it. This is going to kill the ministry of Jesus". Do you not realize the very thing the Devil prompted Judas to do set salvation in motion? He killed the Enemy with his own sword. Now, you have to put your own faith on this word, because if all you do is sit under this like it's another pomegranate, it won't deliver you, but if you can move forward on this word today…