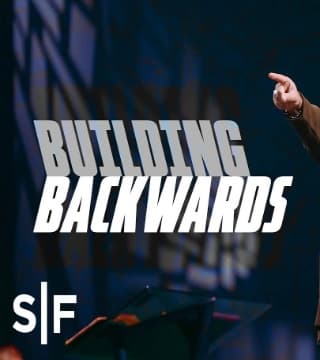 This is an excerpt from: Built Different
Somebody say, "Built different". Built different. That's a statement of clarity. It helps you to know, "Hey, man. It's all right if my life doesn't look like your life or if my gift doesn't look like your gift or if my timeline doesn't look like your timeline". Who gave you your blueprint to begin with? Your beliefs are your blueprint. For most of us, we never really checked out what model we're building according to. What happens in a marriage is you essentially repeat the same blueprint that was demonstrated in front of you without ever stopping to analyze, "Is there a new blueprint God wants to give our family"? Nobody was supposed to have a church this diverse in Charlotte, North Carolina, but God had a blueprint we were building according to before we knew what the blueprint was.

I love the picture when Moses is building the tabernacle where God's presence would dwell in the wilderness. Remember, the tabernacle was mobile. You had to be able to follow. Kind of like life is right now. You have to plan everything in pencil right now with a big fat eraser, just to know that everything is moving, just to know the blueprint might not be what we think it is. There was a verse that always got my attention. I would use it to talk to leaders. The verse is after God has given Moses these very specific instructions about "Here's how you build the curtains for the tabernacle". He goes into great detail about the lampstands and the table of presence where the showbread was. He gives great instructions about where the covenant was to be kept…all of these things in the Holy of Holies, the Most Holy Place.

I think it's so hard for us, because God gives us these great glimpses of the kind of person we can become. You see it through somebody else. You hear it in a moment. You get a glimpse of it. Then you have to carry that glimpse all the way down into the distractions of your real life. Let's be honest. Now, because many are having church at home, you don't even get to have church by yourself anymore. Even as I'm preaching this, there is a distraction. While I am giving you the details God gave me to give to you for what he's building your life and designing your life according to, there's stuff running around all over your house. Some of you even have AirPods in because you're embarrassed to be listening to a sermon in front of your roommates, because they know how you really live and you don't want them to make fun of you.

He told Moses, "Make sure you put all the furniture where it goes in the tabernacle according to what I showed you on the mountain". Moses had a pattern that was shown to him on Mount Sinai, but that's not the mountain we get our pattern from. That's the mountain where God gave the law to his people. The kingdom Jesus came to inaugurate is built different. It's not built on Mount Sinai with rumbling thunder, flashing lightning, and wrath. It was built "on a hill far away stood an old rugged cross". The mountain I want to pattern my life after is not Sinai where the law lives. The mountain I want to pattern my life after is called Calvary where grace is greater than all my sin and shame.

If the rain blows, if the winds blow, if the streams rise, if it beats against your house, it will have its foundation on the rock and it will stand firm. That's what you've been learning in this season of your life. You've faced some rejection. Some doors have been shut. Some things have gone wrong. Some things have toppled. Some truths have been tested, but it's not about the furniture. It's about the foundation. God can move it all around, but how great a foundation, how firm a foundation is Jesus our Lord. If you know you have the right foundation, give God a shout of praise right now!

Lord, I release this word in the spirit you gave it to me. You said to tell these people that if a thousand fall at their right or their left it will not come nigh them because they're built different. You told me to tell them that though the world may be dismayed and discouraged, not so with them, because we're built different. You told me to tell them that in a divided time politically, your church still stands together united under the only name that matters, because we're built different. Upon this rock you have built your church, and upon this rock you are building our lives, and upon this rock of revelation you are building an understanding that can never be shaken, and we praise you for it. In Jesus' name.

Lift up a high praise if you receive it, if you believe that the stone the builders rejected is the chief cornerstone.

Lord, here we are. We're not shifting sand. Our lives are built on you, the solid rock, the one who never walks away, the one who never gives out. I pray for people today who have been flapping back and forth. Maybe they've been more concerned with the furniture than the foundation. Maybe they've been more concerned with certain little items and things in their lives and this going right and that going right, but none of that mattered when the storm came. Only what mattered was what it was built on. Lord, we want to build what we behold in your presence. Today you showed us some things. I could feel it while I was preaching. You were showing us some things. All we ever see is what's wrong with us, but today you showed us what's right with you. If I can accept Jesus and Jesus accepts Steven, I have to accept me too.

We join with Peter's pronouncement today. He said it to people thousands of years ago, but he was saying it for us too. You are a chosen people. Once you weren't. Now you are. Lift your hands like you're receiving on the mountain:

Listen to me. What it's built on determines what it can be destroyed by. Anything that isn't built on Jesus, who is eternal, can be destroyed by something that is temporal. But you are a chosen people. Peter was chosen while he was cussing. He was chosen while he was preaching. Upon this rock, the living stone, rejected by men, accepted by God. We thank you for it right now. Receive it.