Steven Furtick - Only God Knows If You're Ready 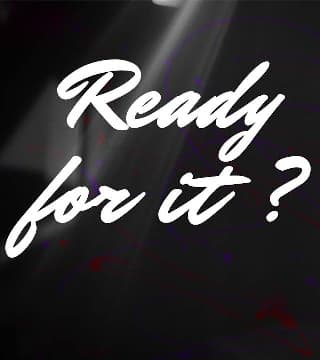 This is an excerpt from: Green Light At The Red Sea.
You've been trying to figure out "Why am I going through this? Why is this happening to me"? Please do not try to play God in somebody else's life and answer that. "Well, God is just using this to test your faith". Shut up and pass your own test and keep your eyes on your own Scantron #2 pencil. But here by the Spirit of the Lord there is a revelation given. I can't tell you the reason you're going through what you're going through, but maybe God will show it to you in these moments together today. It says the reason God brought them to the Red Sea was there were some things that if they were not drowned before they went across, they would be defeated when they got there. It says they left Egypt ready for battle. Verse 18: They went up from Egypt ready… That's what a green light means: You can go now. You're ready now. Sometimes you think it's ready and God gives you a red light instead of a ready light. You're like, "God, I'm ready. I'm ready for this. I'm ready for something better. I'm ready for more. I'm ready. God, I want more influence".

I wonder if you would shout over this one. Show me how exciting this is to you. "Yes, Lord! Bring it on. I want my harvest. I want my blessing. I want my Boaz. I'm a deep Christian. I read Ruth". But if you ever asked God for a king and then got Saul, you will start shouting over here. For God says, "I'm not taking the thorn away. I'm leaving it to keep you grounded. I'm not moving the Red Sea. I'm moving you through it, and I'm sending the Egyptians to make sure you keep moving, because I know you'll go back if I don't do it".

Lord, when they listen to this message, please help them not to pervert the spirit of what I'm saying. Some of them will say that God is telling them they have a green light to walk away from something you called them to, and I don't want them to abuse my message and compare things to Egypt that are really the things you've called them to stick out. So please, Lord, help this message not to be misinterpreted. In Jesus' name, amen.

Now that I got that out of the way, you have to thank God for this. What does this mean? The most basic thing in the world. Then let's not even talk about… What does that mean? Yes, speed up. I know how you are. I see you driving around. This is not driver's ed class. This is a church meeting. So, how many of you have your driver's license? Right. So you did it. You didn't shout when I asked that. You didn't dance. You didn't shake a tambourine. Remember how big it was when you did it? Remember when you were excited about that, and you were shouting and singing about your driver's license, and it was a big deal? Remember, I only can preach out of what I live. Having a kid who just got the driver's license, we started telling all of the old stories. We went around table… We had some family over over Labor Day, and everybody was saying, "When I got my driver's license…" and "When I got mine…" and "These were the rules when I got mine. This is the first wreck I got into, and this is the mailbox I crashed into, and this is how I almost died. Isn't that funny"?

My dad comes home one day. He had a barber shop. He came home for lunch. He said, "Come on. We're going to take the test and get your driver's license". We got in his Jimmy. Do y'all remember the Jimmy? When the woman came out, when I came to back out of the parking lot, the car cut off. She's sitting next to me. She said, "You have two more attempts to start your engine. After that this test will be terminated". Sure enough, I put it in reverse again and it cuts off. It cuts off three times. Three strikes you're out. She says, "This test is over. We will now go back into the office". My dad… Now you have to think this is Lowcountry, South Carolina, 173 degree heat in the middle of July. My dad is a big dude. He's running across the parking lot like the father running to the Prodigal.

You have to know my dad to really… He's in heaven now, but you have to know him to get how funny this story is. He goes, "Ma'am! Ma'am"! He's short on breath. The whole thing is very dramatic. He goes, "Ma'am! Ma'am! I'm so sorry. It's not his fault. I didn't prepare him. I didn't tell him. This old car, ma'am, when you put it in reverse with the air conditioning on, it cuts off. You have to cut off the air conditioning to make…" How many of y'all have had some cars before? How many of y'all's first car wasn't a BMW? How many of y'all's first car wasn't a G-Wagen? I preach to some swanky people. He said, "I didn't tell him you have to turn the air conditioning off before you back it up or it cuts off. Please, ma'am, please don't fail him. It's my fault, ma'am. It's my fault". He's on the cross like Jesus atoning for my sin. "It's my fault. I didn't tell him how to back up". Every time I put it in reverse, it didn't work. She said, "I'll give you one more chance".

When I turned off the air conditioning, the Red Sea parted. I cruised through Highway 17A, I parallel parked the Jimmy, I pulled it back into the parking lot, and I got my license. It was exciting at the time. It was big at the time. It was huge at the time. But it didn't work every time I put it in reverse. I almost didn't get out of the parking lot to take my test. I almost failed the test in the parking lot because I put the car in reverse. When God brought his people out of Egypt, he was bringing them into freedom, and he was getting his glory for himself, but the first thing they did… I want to show you this in Exodus 14 now.

Now you're ready for Exodus 14. Verse 10: "As Pharaoh approached, the Israelites looked up, and there were the Egyptians…" What do the Egyptians represent? Something more powerful than them. It represents their past and, really, it represents their way of life, all they've known. It also represents the provision they've grown accustomed to receiving, but now what they used to depend on is chasing them. All they can see in front of them is a Red Sea. Remember I told you this is not a creek. You can't doggy paddle through this. Let me be clear. Some of you are there right now. The Red Sea can represent anything.

I know some people think the Bible is mainly a history book. I don't think that. I think the Bible uses history to teach theology. So, it uses the example of a body of water to get me to think about things in my life that I'm looking at going, "I don't see how. I just really don't see how. I was excited. I was dressed for battle. I had my Under Armour on. I got my gym membership. I was ready. I had my Bible reading plan. I was ready. I was going to do it. This was going to be a new year, a new me…all that stuff. I thought I was ready. I was ready for the Promised Land, but I was not ready for this Red Sea. I was not ready. I thought I was".

I talked to somebody the other day. They were like, "Growing old is not for wimps. I just didn't know. I thought I was ready to age gracefully. I always said, 'I won't be this kind of person. I won't be that kind of person.' I thought I was ready, and I was ready in a sense, but I wasn't ready for this barrier. I wasn't ready for this test". The first thing you do when you come up on something you were not ready for… Not ready at all…no training, no expertise, no swimming classes, no boat, no floats, no vehicle to get you across. God said you've been feeling that way lately. I don't know who you are. I don't care if it's 3 of you or 30,000, but God said you're standing in front of it right now and it's what stands between you and freedom. God is going to get his glory as you go through.