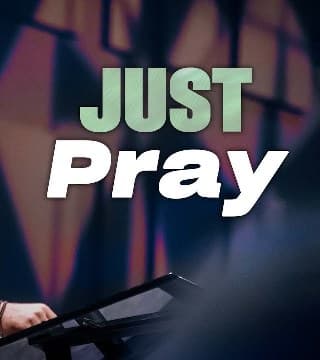 This is an excerpt from: Prayer Doesn't Need To Be Perfect
The peace of God will set up a guard at your heart (that's your emotions) if you guide your mind. That's why he says there's power in prayer. I don't pray like I could, like I should. Sometimes I don't pray until the pressure gets so bad I feel like I'm about to explode. The Lord is like, "Are you done with that now? Do you want to come on over here? Have you dragged that far enough across the floor? Have you gotten low enough now"? What if you don't have to wait until it gets to that point? "Lord, keep me from doing something crazy in the next five minutes that's going to take me the next five years to clean up". What if you prayed that? What if you involved God earlier in the process before it goes all the way to level 10? What if God wanted to meet you at 2? "Oh, this is slipping a little off track". If you drove your car like you guided your mind, you'd be in a ditch. Just let go of the wheel until the last minute when you're steering into a semi.

Now you want to drive? But we do it with our souls. We wait until it's the exact last minute. "O God, deliver me from the decisions I've made all week". No, I'm serious. Y'all do me like that. In one hour on Sunday you want me to preach a word that will deliver you from the decisions you spent all week making. It's not right. It's not fair. I told the dental hygienist one time, "I'm not going to floss. I'll be here every six months. Do the best you can. Whatever you can get out of my teeth in that time, just do it, and the rest leave it, and it'll grow for the glory of God until you remove it again". I know it's gross, but I let it build up until the last minute. God has been saying to me, "You can bring me your problems, but you can also bring me your thoughts".

"Delight yourself in the Lord, and he will give you the desires of your heart". He will put them in there. So I prayed the man who had the scissors at me in the thing… I prayed, "God, I want to take his scissors from him". I was more fit than him. I could see it. I sized it up real quick. They say, "Pray for your enemies". It doesn't say what you pray for them. You have to start somewhere. "Lord, let him fall on his scissors right now". The important thing is that you involve God in the process. Have you ever had to pray in anger? Pray angry. I was getting ready to preach one time, and I started praying to the Lord. "Why will you hide your face from me? Eli, Eli, lema sabachthani. Why have you forsaken me"? I wasn't feeling anything to God. I felt as if God was saying, "Oh, there you are. Why am I hiding my face from you? Why are you hiding from me"?

You keep God out of the process, and you end up being just like Ahab. Oh, I hate Ahab, but I have to be honest: I kind of relate to him. The Enemy is attacking me with 32 kings. "Okay. You can have it". It is easier to just believe the lie than it is to… You have to train yourself in truth. It doesn't come naturally. Paul said, "Whatever things you have seen, received, or heard from me…" A lot of us have never actually seen a pattern of how to fight our battles with God's help. We believe the way we've seen it done is the only way it can be done. We don't really believe…really believe…we can give our battles to the Lord. We don't really believe the peace of God will guard our hearts and minds. But I want you to watch what happened to Ahab. The Enemy doesn't just attack you once, and if it doesn't work he leaves you alone. The Lord gave Ahab a victory over Ben-Hadad, but just after the victory, the prophet came back.

Look at this in verse 22. He said to the king of Israel, "Strengthen your position and see what must be done, because next spring the king of Aram will attack you again". I'm under attack again. I'm dealing with depression again. Jesus died for me, and I believe his blood cleanses me, but I'm struggling with unworthiness again. The prophet said something very interesting. It's not just prayer. It's not just peace. He said, "Strengthen your position and see what must be done". The officials (verse 23) of the king of Aram had a theory on why God gave the victory to the Israelites the first time. They advised him, "Their gods are gods of the hills. That is why they were too strong for us. But if we fight them on the plains, surely we will be stronger than they. Do this: remove all the kings from their commands and replace them with other officers". "Remove and Replace" would be a good sermon too, by the way, but not today. "'You must also raise an army like the one you lost—horse for horse and chariot for chariot—so we can fight Israel on the plains. Then surely we will be stronger than they.' He agreed with them and acted accordingly".

He agreed with the lie and acted accordingly. This is Ben-Hadad, the enemy. He agreed with the advice of his counselors. He thought God, Yahweh, was like Baal of the Phoenicians. He thought God was only limited to one geographical locale. "The reason they beat you was because you fought them in the hills, but if you fight them in the low place…" Here's the thing. The Enemy attacked some of you on one level, and it didn't work, because you still have your faith, and you still have your sanity, and you didn't blow your brains out, and you didn't give in, and you didn't walk away. But now he's hitting you with a low blow. He said, "If you fight them in the plains, we'll be stronger than them". But look at what the word of the Lord says.

I want to show you this in verse 28. It says they lined up against them, and they seemed like a flock of small goats. They looked too small, but they had God fighting for them. Verse 28: "The man of God came up and told the king of Israel, 'This is what the Lord says: "Because the Arameans think the Lord is a god of the hills and not a god of the valleys…"'" Because the Enemy thinks that if he hits you in your weakest spot… Just be honest. How many of you has the Enemy hit with a low blow lately, in the place where it hurts the most? This is what the Lord says: "Because he hit you where you were the weakest, I am going to display my strength in the greatest way". The Enemy thinks, "Oh, if I fight them there, they'll give in," but he's wrong about it. The harder he hits you in the most vulnerable place, the greater a candidate for the grace of God you become.

The Enemy couldn't defeat some of you while you were awake, so now he has started sneaking into your sleep. You've been having dreams in the middle of the night about scenarios. You've been waking up in a cold sweat not even rested. He couldn't beat you awake, so now he's fighting you asleep. The Enemy took a lot from some of you personally, but it didn't cause you to lose your faith, so then he hit your kids. It was one thing for you to be dealing with it, but now you're watching your kids suffer. "Oh, if I can't beat them in the hills, I'll fight them on the plains". God said, "I am the God of unconditional victory". I believe God is calling somebody today to take back not only the high places, but God said, "Because your enemy thinks I am only the God of the hills, I am going to show you a victory in the valley so you will know I'm not like Baal. I don't operate based on physical location. I don't need perfect circumstances to do my work".

In fact, if you have faith to believe it, I hear God saying, "I stacked the odds against myself". That's what the Lord said. "I'm making it so impossible, because I want you to know it's Yahweh. I want you to know it's God". See, when they're fighting you in the mountains, when they're fighting you in the good time, you think it's you. You think it's your leverage. This is what the Lord says: "In this season, I'm going to do something in the lowest place, in the most vulnerable place. In your weakness I am strong". So, what does the Lord say? That's what I want to know. I don't want to agree with the Enemy about anything that keeps me from hearing what God has said about me, whether it's why I'm unworthy, why I'm incompetent…

In fact, Lord, right now, in the name of Jesus, I break the power of the agreements your children have made with the Enemy. We call on you, God of peace, to set up an armed guard at our hearts in Christ Jesus. We thank you that our position in you is permanent and it is fixed. Lord, today, we don't want to give the Enemy so easily what you died with your blood to purchase for us. You came to give us peace.

God, we're not going to be so quick to hand over the best of what you gave us. We've let the Enemy have enough. He has taken enough ground in this season. We've given up enough ground. Not another inch. I thank you that now, in this moment, you are releasing your peace, your unconditional victory.