Steven Furtick - I Wish God Would Tell Me What To Do 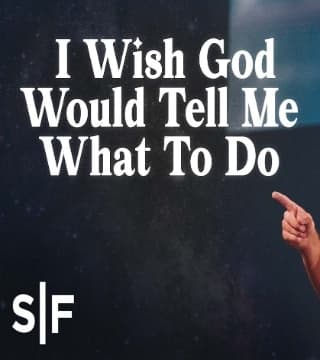 This is an excerpt from: Making Moves.
There comes a time in your life when you must stop mourning. Nobody can tell you when that is. Only God can tell you when you've cried over Saul long enough. That's what the prophet Samuel had to come to terms with. I know you believed in Saul, and I know you prayed for Saul, and I know you wanted more out of Saul, but it's time to fill your horn with oil and be on your way, because your plan B is God's plan A. "I found a man after my own heart, and his name is David". There's a shift that happens. Now David has to decide to step into what God set him apart for. I'm hesitant to preach stuff like this, because people will take and twist my words and quit their jobs. This is not a license for irresponsibility. I have received so many emails from people who started a bagel shop because they like bagels and I talked about Peter stepping out of the boat. That's not what the passage is for. I've seen so many people blame God for bad decision-making habits. I get it, but I think if God would be… This is just a theory I have.

Let me read you the Scripture. When David needed to know what to do next… I just want to take a poll at Ballantyne. I wish I could do this at all of the campuses. Do you have a decision you need to make right now? Raise your hand. It won't be as big as David's decision to be king. I get it. You're not that epic. I'm not that epic. We're not that epic. But don't you believe that the principles that governed his epic rise and his dynasty are the same principles God would use to govern your everyday life? The principles aren't different. The stakes aren't as high, but the principles are no different. I want to watch what David did when it came time for him to decide. "Saul is dead. Now how do I step into what God set me apart for so many years ago"? That's the issue: how to get there, when to get there. Any conversation about trust must involve a conversation about timing. Trust and timing are inseparable. Trust takes time. Stop giving your first date your family history. They have not earned that information at this point in the relationship.

Keep it really guarded for about six months, and then tell them about your crazy stepmom, but not on the first date, because trust takes time. That's why Drake said "No new friends," because trust takes time. Let's get back to the Bible. I feel carnality coming on the church. The Bible says in 2 Samuel 2:1, "In the course of time…" Even that phrase would preach. I'm not going to preach it, but it's a strange phrase that is used throughout the narrative of David's life to signify a shift. "In the course of time". We don't know how long. We don't know exactly what period it's referring to, but it's a significant phrase, because it took David some time to shift and to figure out what God wanted him to do next. "In the course of time, David inquired of the Lord. 'Shall I go up to one of the towns of Judah?' he asked. The Lord said, 'Go up.' David asked, 'Where shall I go?' 'To Hebron,' the Lord answered. So David went up there…" I'm like, "Well, yeah".

Write down the word strategy. David is asking God for his next strategic move, because he wants to take the right next step. "I've been running for 15 years. I don't want to waste any more time, but, God, I need to know my next step. I need to know if the marriage is over or if I should give it a little more time, because I need to know my next step". "I hear the doctor saying my kid should be on this medicine, but I'm not so sure if that's the right thing". Wouldn't it be nice if God would say, "Yep, Lexapro," and just tell you, "Yep, Ritalin"? How easy would it be? You'd go fill the bottle and pop the pills, and you'd go to Hebron and be a king. But most of us don't enjoy this specificity of connection with God, and the people who say they do are weird. They're weird.

The people who tell you that God told them which color shirt to wear to church that day and they wore purple because it's the color of royalty are weird. They will often do something that contradicts the written Word of God and blame it on an impression and call it the Holy Spirit, which messes it up for the rest of us, because now I don't even want to say God told me to do something because I've heard so many people use that phrase to pimp their own decision and put it on God, because now they don't have to deal with the outcome. I'm just trying to say I wish it could be this specific. I wish God could be more like Google. I'm just being honest with you. I have a great relationship with Google. Google knows what I want to ask it before I finish the word. The first three letters.

Now Google also knows so much about my life. Google also knows my blood type and the color of my urine, but that's beside the point about information secrecy. What I like about Google is Google seems to anticipate what I need to know. God seems to be the opposite, because I'm begging him sometimes to let me know what to do about this relationship, about this decision. What if you could invest your money with the kind of knowledge with which David went to Hebron? What if God would tell you which stock? What if God would tell you how to balance the portfolio? What if God would tell you which position to apply for? Wouldn't that be amazing if God would order your steps? Somebody sent us an Amazon Echo recently. I would suggest putting it on your Christmas list. It's an amazing device. This is not a product endorsement, but it's amazing. Do any of you have it? It's voice activated, because sometimes you can't be bothered to have to use your thumbs.

I like Alexa. That's her name. I have a relationship with Alexa where I say her name. I say, "Alexa," and she lights up, kind of like Holly when I say… I can tell her what song to play, what task to perform. "Alexa," and she lights up and answers me. She hears me when I call. She's like the Lord. Well, yesterday I walked in and Graham was doing his homework, but I want you to see something. I caught it on my video camera, because I'd never seen anything like this before.

Pastor Steven: How you're doing your homework.

Graham: I am checking.

Checking. Checking. Touch your neighbor and say, "I'm checking. I'm checking. I already did the work. I'm just checking". I have a feeling when David inquired of the Lord, "Where do I go next"? he was already on his way. He was just checking, because when you walk in God's ways you will know God's will. All you have to do is check. Jesus said, "If I leave, I'll send you the Spirit of truth, and he'll show you the ways to walk in". I'm checking. See, I don't have to ask God about every decision. I don't have to stress about God's will. When I live my life in God's ways, I have the confidence that my steps are ordered by the Lord because I delight in his way. You don't have to worry so much about what when you get your why right, when you walk in the ways of God, when you submit to him, because God's strategy is submission.