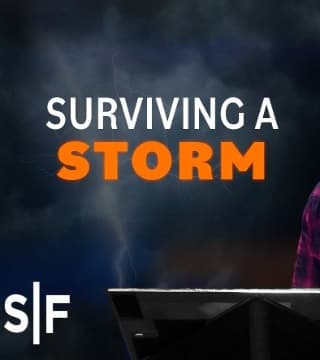 Have you ever had to take a promise from God's Word and just hold on to it for dear life…a promise for someone you love who's sick, a promise for provision when you don't see where it's coming from, a promise that God is going to fulfill his purpose for your kids, and even if you don't know how it's going to…? Have you ever had to hold on so tightly to something in the fourth watch of the night? That's what I mean by walking on the word. Peter is walking on the word, but he's walking against the wind. So are we. See, Jesus didn't stop the wind; he gave the word. "Come," he said. That's no more instruction than you give your golden retriever. "Come". Maybe a golden retriever is smarter than some of us, because a golden retriever doesn't question the master, yet some of us, the first trace of wind, the first trace of disappointment…

I always thought Peter fell down walking to Jesus, because he gets out there a little ways, and most of us do… We get out there a little ways, we ingrain a habit for a little while, we go in a new direction by faith and trust God for a time, but somewhere during the process… The Bible says that after Peter had walked on the water and came toward Jesus (verse 30) he made a critical mistake. He saw the wind. Which one is stronger, the word or the wind? I want to say it depends which one you watch. I want to say that the wind did not have the strength to knock Peter off his feet. The only reason he went down is because he took his eyes off the word and started watching the wind.

See, faith is not an imaginary state where I get myself worked up into a delusion, like nothing is ever going to go bad again, and then I'm surprised when bad stuff happens. Faith is a focus. Faith is the ability to say, "I'm putting my eyes on the goodness of God in this moment, and I'm not looking back. I'm not looking forward. I'm not looking around. My mind has already reached a conclusion. God is for me. God is with me. If the wind be against me, if the world be against me, if all hell's power nails him to a cross, in three days he will rise, because my faith is focused on the word of God that I'm walking toward".

I want to prophesy over somebody today and declare over your life. The wind doesn't have to stop for you to keep walking toward Jesus. The situation doesn't have to get better for you to see the glory of God. I'm telling you what I know. If everything goes worse, if everything gets crazy, if everything rises up against you, God is an army. God is a second circle. God is an ever-present help in the time of trouble. If your life is built on the foundation of his Word, there is no wind that can rage against you that can shake it off, because I'm not walking on water and I'm not watching the wind.

I love how the Old Testament prophet Elijah… He went up on this mountain. There had been a drought in the land for like three and a half years, and he heard something. He heard the sound of the abundance of rain. He heard a prophetic indication that God was about to send blessing on the land again, so he did something that looked weird. He put his head in a prayer posture by his knees and sent his servant to go look to check if there was anything in the sky. When I read that passage, I thought how at that point if Elijah had looked at the weather, if he would have looked at the surface of his situation or if he would have consulted what he felt or what he saw, he would have lost his faith. That's why he knew you can't watch the weather. You can't spend all this time in your life…

Look. The reason you're stressed out might be over stuff that is a hypothetical scenario that the Enemy suggested to try to get you off track, because he knows if you walk on this word no wind is strong enough to knock you off your balance. You're in a situation right now, and it's wind versus word. The one that is going to win is going to be the one you focus on. You can't afford to be doing like this to see if it's okay to serve God. I can give you 10 reasons right now why you could question if God even exists. We could all do it. We see horrible things happen all the time. I could give you 10 reasons, but I know he is with me. I'm not collecting evidence to see if he's with me. I already know he's with me, because how would I have made it this far if he wasn't? How would I have life or breath or grace?

I know he is. I just want us in this moment to be very sure that if he has spoken it, nothing you can see in your situation… Your eyes are tricky. Your ears are tricky. Your senses are tricky. When he saw the wind, when he trusted his senses, he slipped. Your faith will always slip when you start consulting your feelings. It will always slip. We just want to take a moment and do what the disciples did when they got back in the boat. There's a really interesting little phrase Matthew puts in the gospel. He says after Peter sank and Jesus helped him back up… Jesus is so gracious. He doesn't hold him under water for 15 seconds so he'll learn the lesson really well.

You know that view of God you grew up with that said he was just looking for an opportunity to punish you? Nah. He was right there to catch him. Go Go Gadget arms or something like that. He could do anything. When he asked him the question, "Why did you doubt"? (verse 31) the answer was the wind. He doubted because he lost focus. Focus is about what you choose to look at. It doesn't make anything go away; it just redirects your attention to what you need to be thinking about, what you need to be looking at, what you need to be considering. When they climbed into the boat, the wind died down. The wind didn't die down so that the miracle could happen. In fact, the wind was against them to prove that God's word was greater than the wind.

So let's just take a moment right now and clap our hands that the wind may be against me… Come on. I'm going to need you to stand up and worship for a moment, to get back in the boat and worship him that he is God in the storm. I want to pray in this moment for those of you who have been working against the wind. I understand that the nature of life is that all of us will face challenges in any 24-hour period, so it kind of depends on when we catch you. What I mean is that you've been in a season where, like Solomon says, you've been watching the wind instead of remembering the word of God and focusing on the things he has placed in your life to help you. You've been thinking about things that didn't happen or might happen, and it has just gotten you watching the wind. I want to pray for you right now.

Father, in the name of Jesus, I lift up every wind watcher to you, because we're meant to be word walkers not wind watchers, and we are meant to believe something deeper than what our eyes can see. I pray today that as this word you gave me in my own personal time with you has gone forth to them, that they received it on the level that they needed it, that they received the word they needed to walk on in the coming week. They might just have to walk on it one moment at a time, one step at a time, one moment at a time.