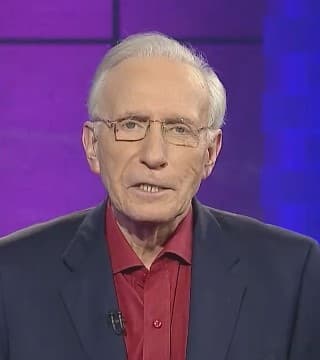 Tonight begins Yom Kippur, Day of atonement, this is the holiest day on the traditional Jewish calendar. On Yom Kippur, boy, have I got memories and you know being raised in Orthodox Jewish home, I hated it! Why did I hate it? It's a day of fasting. What kid loves fasting? I never even understood the whole thing to be quite candid with you. But I did know we get a great meal that night, and the rabbi I think it was a little sadistic I have to tell you because he kept dragging and dragging the end of the service, and I kept saying to my father, "When's it gonna end"? You know I remember these fond memories of Yom Kippur. But the funniest memory of Yom Kippur is one day my Orthodox Jewish father, who hated the fact that I believed that Jesus was the Jewish Messiah, I said to him one day: "I would like to prove to you why I believe, and I used His Hebrew name, Yeshua is the Jewish Messiah". And I got shocked. He said, "Okay".

So I took advantage of it. I went immediately to the most powerful witnessing scripture proving Jesus is the Messiah. It's the prophet Isaiah the 53rd chapter written 800 years before the Messiah even came to earth, and it is such a perfect description of Messiah that my father said: "Wait. You're reading from a Christian Bible. That sounds just like"... I said, "Yeshua". He said, "Jesus. It sounds just like Jesus". And I thought, 'Hmm, that's good. He knows how I... Isaiah is prophesying about Jesus.' But he said, "That's not a Jewish Bible". I said, "Wait, a second Dad, it says Jewish publicist". "That's not good enough. You have to get a Bible that is inscribed by our Orthodox rabbi. That's good enough". So I march the next day to the rabbi and I said, "Would you give me a Tanakh (that's Jewish Scriptures) and would you endorse it to me"?

Now, he knows I believe in Jesus too and he's scratching his head and puffing on his corncob pipe and um, he, and-and, um, but he does it. He can't understand why I'm asking for it I understand, but I'm not gonna tell him. So he inscribes it to me and then I'm march the next day to my father and I said, "I just got it from the Orthodox rabbi". And he looks, "Yeah, this is kosher". And I read the fifty-third chapter of Isaiah. Guess what? It reads the same. It's the same when the Jewish Bible and the Christian Bible, but it had to be approved by the rabbi. That's the way we Jews are. And my father had one of two choices: he either could have repented of his sins and said, "I believe that Jesus is the Messiah" or another choice was he said, "I always thought there was something wrong with that rabbi. If he gave you that Bible that's talking about Jesus I remember one day on Yom Kippur I walked by a restaurant going to the synagogue, and I saw the rabbi eating something there".

The extremes are people go to. Look the whole Jewish nation is going to extreme. The Talmud says, "Without the shedding of blood". The Torah says, "Without the shedding of blood". Both say it. "There's no remission of sin. There's no atonement for sin". So how do you have day of atonement? The truth is the rabbis according to the Talmud says if a voice from heaven says, "Go left", and if the majority of the rabbis say, "Go right", the majority of the rabbis have the voice on earth. You ignore the voice from heaven. But here is the truth. This is the set time to favor Zion. This is the time that God is removing spiritual scales, and we are positioned in such a position. It's the most amazing thing, the books we're distributed, the lectures on the supernatural with seventeen eighteen hundred unsaved Jewish people come, in which the majority stand up and make professions of faith.

Every day our show is on multiple times in Israel. We have an entire television network that is must carry on the basic package of every television set in Israel and when you are partnering with us in your prayers and in your finances you are touching the apple of God's eye. He that touches Israel the Bible says Israel is the apple of God's eye Jesus came to Israel at His first coming. He's going to return to Israel Zechariah says, "Every Jew will recognize Him at that point", but here's what I know we are getting a harvest of Jewish believers to finish the job our forefathers started and didn't finish. It says, "The call of the Jew is to be a light to the nations. To take the Gospel to the four corners of the earth".

The Jewish people we are raising up will be Modern-day Paul the Apostles, and you and I at Academy Rewards night. It won't be on Yom Kippur, but at Academy Rewards night you and I are going to share, and share alike in the rewards in heaven I Pray in Yeshua's name That the peace I'm experiencing right now this Yom Kippur Eve would literally touch you in Yeshua's majestic name, our wonderful Savior. Amen.