Rabbi Schneider - Where Did God Come From? 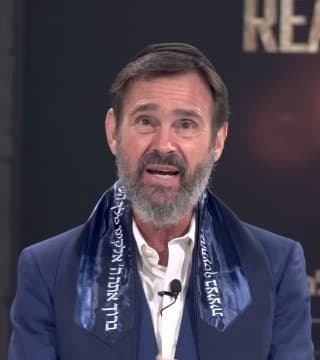 Baruch Hashem, blessed be the name of the Lord. I'm excited to get into the first chapter of the book of Genesis, we call it in Hebrew Bereshit, the Book of Beginnings. We're gonna be looking at the mystery of creation. Now in this series I want to look at two separate aspects. First of all, I want to look at the nuts and bolts of creation and then I want to establish in your heart the reason that Father God created you through Yeshua, His Son. This is a really deep series. Beloved ones, let's pray.

Father God in Yeshua's name I ask You to penetrate the depths of our being with truth. Father, Your word is truth. We ask to receive revelation now, that we would better understand, Father, our purpose on earth. In Jesus' name and for Your glory. Father we pray that the love of God would birth in our hearts in a greater dimension through the receiving of Your word. Amen and amen.

Once again, we're looking at two separate areas, or categories. The first one is, I want to go through several verses in the first chapter of the Bible, Genesis chapter 1, and talk about some of the distinctive features of the creation process. And then we're gonna look more specifically at verse 26 and 27 of chapter 1, to better understand why it is that the Lord created you and me. If you think about it, He created us for a very specific purpose and if we're gonna identify our purpose for life and our destiny, we're gonna have to understand and comprehend why the Creator chose to birth us in the first place. The grass withers and the flowers fade, but the Word of the Lord, bless His name, abides forever.

That's why when the Lord first revealed Himself to Moses in Exodus chapter 3 and Exodus chapter 6, Moses said to Him at the burning bush, "Who should I say sent me? What's Your name"? And the Father answered Moses and said, "I am that I am. I will be who I will be". In other words, He's beyond naming. Again, He's beyond fully knowing. The Lord said to Moses, "You can see My back, but you can't see My face". Don't misunderstand me beloved church, we can know God, but there's always more of God. We'll always be discovering Him. He's so far beyond us. He's so infinite that we can't fully ever grasp Him. He's incomprehensible fully, because He's God. He has always been, there's continuously new life bubbling out from Him. He's always more. He's always more and this concept of Him always being more is connected to the term "abundant life" that Jesus used. Jesus said, "I will give you life and I will give it to you more abundantly". This more abundantly means that there's always more.

But you see, what has happened and the reason that as we age we lose that sense of wonderment, is because we've seen it before. We've seen the flowers. We've seen the animals. We've had our first boyfriend. We've had our first girlfriend. All the things that were so enthralling when we experienced them for the first time no longer captivate us the same way, because listen, they're no longer new. But God, listen, He's always more and therefore He's always new. I'm trying to help you understand. In the beginning, we're not talking about the very beginning, because God has no beginning. He's that big. He's that magnificent. He is the Creator. He is the cause that has no cause. It's impossible, as I've been sharing, for the human mind to grasp this; how God, how this infinite being could have always been, that He came from no where. But in the beginning means it's the beginning of our story. It's the beginning of the formation of the earth. It's the history of mankind.

But once again church, God has no beginning. I want you to be awed by God. I don't want you to ever lose your sense of wonderment as to who He is. He is so big beloved, He's beyond religion. He is God. And so when the Lord said to Moses when Moses said, "What is your name"? And God said, "I am who I am. I am that I am and I will be whom I will be". What the Lord was saying to Moses is, I'm beyond naming. I'm beyond naming. You see when we name something, when we name somebody, we put ourselves in a position of superiority over that thing that we've named. When a scientist discovers something they name what they've discovered. God said to Adam, "Name the animals. I've given you dominion over them".

And there's truth in the sense that we know Yeshua's name. We know the name Jesus. We know the name Yeshua, that was His name in the flesh, right? When He walked upon the earth 2,000 years ago. And we know that God revealed to Moses that His name was Yod-Hey-Vav-Hey, often pronounced YHWH, but the meaning of YHWH is I am who I am, I will be whom I will be. It's from the root word I am or I will be and the unique thing about God's name YHWH is that it's not a noun, but it's a verb. In the verb tense of Father's name YHWH is the form of, listen, continuous unfinished action.

Now we know there's only one God. In fact the greatest declaration of Israel is, Sh'ma Yisra'eil Adonai Eloheinu, That's related to this word Elohim. It means Our God. Eloheinu, means our God; Elohim, God plural. Sh'ma Yisra'eil Adonai Eloheinu Adonai echad. What that means is, Hear O Israel, the Lord our God, Eloheinu, our God, the Lord is one. So once again, we're affirming the oneness of God. So if God is one, if there's only one God, why then does the scripture say here, "In the beginning Elohim," God plural, "created the heavens and the earth"? And the reason is beloved ones, is because of the multiplicity of the nature of God. Within God, listen now, there is relationship. God, listen now, is multidimensional. He's manifested Himself, listen, as Father, Son and Holy Spirit. He's one and yet He's multidimensional.

We read for example, that when the Lord created man, He created man, we read here in the first chapter, the 27th verse that He created man, listen, "Male and female, He created them in His own image". So within God there is both the masculine and the feminine. God is both male and female. We know in the scriptures that He's referred to as He, which is the Father part of God, the masculine part of God. But God also has feminine attributes. Once again, verse 27, "God created man in His own image. In the image of God He created Him male and female". And so the female nature is also part of God's nature. The point is, that within God there's a multidimensional aspect. He's Father, Son and Holy Spirit. He has revealed Himself to us as male and female in the creation of humankind. And so we read here in the first verse, "In the beginning Elohim," God plural. And the reason He's referred to in the plural, is because of the relationship that exists within Him between the different parts of His nature.

Let me say that again, you might want to write it down. The reason God is referred to in the plural in verse number 1 of the first verse of our Bible, "In the beginning God, Elohim created the heavens and the earth". The reason that He's referred to in the plural is because of the fact that the plural reflects the multidimensional nature of His person, that within Him there's a multidimensional element that there are different parts of Him all contained in His oneness. And for this reason if you look with me for a second in the 26th verse of the same chapter, Elohim, once again God plural, Elohim; "Then God said," listen, "let us". Why does He use the word us? Focus on the word us. "Then God said, 'let us'". Why did God say us? Who is He talking to?

Listen again. "Then God said, 'Let us'". You see us speaks of what? Relationship and it's plural. It's you and me, right? "God said, 'Let us make man in our image'". Once again the word our speaks of more than one. There's only one God, but within the Godhead, within God, there's a multidimensional projection and essence of His person. There's relationship within Him, that the Father's relating to the Son, who's in His bosom; that there's a male and female aspect of God that's all contained in the Godhead. God is one, but there's once again a multidimensional nature to His person. And so God said, "Let us," plural, "make man in our," plural, "image".

Let me ask you this question church to put it in perspective, can you understand how God has always been? We can only ask the question, "Well where did He come from"? We can't comprehend how He's always been. We function through the laws of cause and effect. We think, "But how did He get here? Where did He come from"? But you see, God is beyond our ability to fully know, because He's spirit and He's so far above us beloved ones, that we'll never fully grasp Him and that's what makes it so exciting and that's what puts you and I in awe of Him. God loves you. We're gonna continue this study. I've got so much more for you. I'm gonna reveal to you from the first chapter of Genesis why you were created. Tune in for the next broadcast. I love you and shalom.