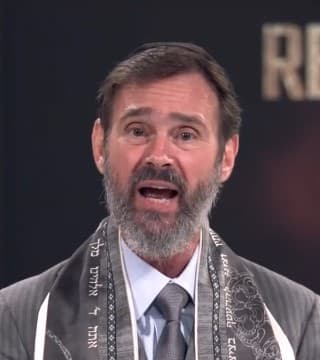 Rosh Hashanah means the head of the year, because according to our Jewish tradition we believe that this is the day that God created the world. And then Yom Teruah, because we read in the book of Leviticus that God told us on this holy day to blow the shofar, or the trumpet as a reminder.

Now in the previous episode I talked about what the blowing of the shofar reminds us of. And to get to it quickly in the book of Exodus, or Shemot, chapter 19 we find that the Lord appeared to more than a million Israelites in the wilderness at Mount Sinai. And the way that He did this is He began to blow a shofar from heaven. It was a cosmic shofar. It came from the heavens. The shofar grew louder and louder and louder and then when it reached a climax, a crescendo in volume, God spoke and more than a million Israelites heard His voice and trembled. The point is that the blowing of the shofar from heaven announced God's coming down to earth and revealing Himself to humankind.

Now as I shared last week, what happened in the past is what will be in the future. So these holy days not only add application in their initial historical context, but they also have application beloved, for the future. And so when we consider that when the Israelites blew the shofar every year going back all the time to the revelation that was given 3,500 years ago to be reminded about something, what they would have been reminded of was how God revealed Himself to them at Mount Sinai with the precedents of the blowing of the shofar.

I want to talk to you today about things that are happening in the planet that tell us that Yeshua's return is nigh. You see Jesus told us that we could recognize the time of His coming by signs, or things that are happening on the earth. I don't know when He's gonna return. I do know this, what we're seeing in the world right now is absolutely and most definitely a prelude to Messiah's return. We should be expect God, we should be expecting God to clear up all this chaos and to set the world straight. Let's look at some of the things that are happening in the earth right now in order to recognize that indeed Yeshua's return is getting close. In fact Jesus' last words in the book of Revelation are these, "Behold I come quickly. I'm coming soon". Let's take a look. First of all in the book of Genesis chapter number 19 we read that God destroyed Sodom and Gomorrah because of sexual perversion.

Well as we look in the world today beloved ones, we are living in an earth that is filthy with sexual perversion. Immorality taking place all over the earth, child pornography at an all time high, homosexuality is spreading like an epidemic in the Western world. It was because of sexual perversion that God destroyed Sodom and Gomorrah and it's because of sexual perversion that God is gonna judge the world with fire again at Yeshua's coming. We read for example in the book of Genesis chapter 19 these words, "Before they laid down, the men of the city, the men of Sodom surrounded the house both young and old, all the people from every quarter. And they called to Lot and said to him, 'Where are the men that came to you tonight? Bring them out to us, that we may have relations with them'". He's speaking here of sexual relations. "Then the Lord rained on Sodom and Gomorrah brimstone and fire from the Lord out of heaven. And He overthrew those cities, and the valley, and the inhabitants of the city, that grew on the ground".

Those two verses at the end were the 24th and the 25th verse. God would not tolerate the sexual perversion that had so defiled His creation. Beloved, we're living in that time now. So many times people today go out on a date for the first time and in their mind they think what you do at the end of your first date is have sex. Sanctity has been removed from the sexual equation. We know that God brought man and woman together to become one in holy monogamous marriage and matrimony and something that's pure and undefiled. The scripture says, "Let the marriage bed be undefiled". And yet today people have sex like they're putting their socks on. It means nothing to them and yet it's sacred to God. And because mankind is so misusing, this holy gift that God gave man, God is gonna eventually soon put a stop to it and cleanse the earth just like He did in the days of Noah.

Why did God destroy the earth in the days of Noah? To cleanse it, so He could start over. He's gonna do the same thing beloved ones, once again. The widespread issue of sexual perversion. We read in Romans 1 one verse 25 through 27, "For they exchanged the truth of God for a lie and worshiped and served the creature rather than the Creator, who is blessed forever! Amen. For this reason God gave them over to degrading passions. For their women exchanged the natural function for that which is unnatural; and in the same way also the men abandoned the natural function of the women and burned in their desire towards one another. Men with men committing indecent acts and receiving in their own persons the due penalty of their error".

As we continue to look at the culture that we're living in we realize that Paul told us in the book of 2 Timothy 3:1, that before Yeshua's return, he said, "Difficult times would come". We're living my friends in these difficult times and one of the difficult times that we're seeing is the break down of marriage. So much divorce, it's reaping, it's reaping so much havoc. So many children are confused and disturbed and they don't know who their real parents are and they grow up broken without ever having built trust in their heart, because of coming from broken homes.

Now listen, if you're watching right now and you've suffered a divorce I'm not heaping any condemnation on you. The blessed hope of Messiah Yeshua can heal all things. He can repair all things. His blood takes away all sin and God can restore even that which seems impossible, because there's nothing impossible with God. So this is not about making anybody feel ashamed or condemned. But the truth is divorce causes many problems and it's very destructive. You see the fabric of society is built upon solid marriages, but when we have in the Western world over 50% of marriages ending in divorce and now people, or many of them not even wanting to get married, because they say, "Why get married and risk being divorced"? That is what we call the break down of marriage.

We read in the book of 1 Timothy chapter 4 verse 3 in the end times, speaks about men will be forbidding marriage. And so this kind of concept today of, "Why get married, that's foolish? Look at what happened to your parents, they got married and then got divorced, so let's avoid that pain and let's not get married". We find the break down of marriage moving into a greater accelerated pattern all throughout the social stratus in the Western world right now. And beloved, this is a sign of everything breaking up and it's preparing the world for Yeshua Hamashiach's return. We also read in the book of 2 Timothy chapter 3 verse 1 through 5 that before Messiah's return, "Men will be lovers of self rather than lovers of God".

The last days, the days leading up church, to Yeshua's return. "Realize this, then in the last days difficult times will come. For men will be lovers of self, lovers of money, boastful, arrogant, disobedient to parents, ungrateful, unholy, unloving, irreconcilable, malicious gossips, without self control, brutal, haters of good, treacherous, reckless, conceiters, lovers of pleasure rather than lovers of God".

Beloved, we live in an earth who's spiritual atmosphere is vibrating with this right now. I mean if we go back 100 years ago, people had the common moral sense to at least try to show other people courtesy, to at least try to, to live moral lives, because they had the fear of God in them. Today most of society has completely abandoned that. They've thrown off all restraint and they're proud to be heathenistic, pleasure seekers, lovers of self, rather than lovers of God. And Timothy said this type of spiritual climate describes the last days leading up to Yeshua's return. Jesus is getting ready to come back for you and for me. Get ready.

Let's continue on. We also find in scripture that during the last days nations will rise against nations and will be gathered together against Jerusalem. Even today Jerusalem is at the center of the world, the center of controversy, the center of fighting. Such a small nation, about the size of New Jersey and yet so much focus is upon it. And we find so much tension in the atmosphere, even still people being killed by terrorist all the time. I was just in Israel. People were getting killed through terrorist attacks, etc. Listen to what the scripture says concerning Jerusalem.

"It will come about in that day that I will make Jerusalem a heavy stone for the peoples and all who lift it will be severely injured and all the nations of the earth will be gathered against it". We're seeing more and more political tensions arising as Israel is continuing to move forward in their God given destiny and as they do nations around the earth are becoming more and more enraged trying to figure out how to stop them. I love this next one. Jesus said this, "Before His return," He said in Matthew 24:14, "The Gospel would be preached in the entire world".

Sure, there's still a few very remote places on earth that have not yet heard the Gospel. But by enlarge the Gospel now has circled the entire world and missionaries such as myself, we go to some of these remote places and we witness how ready and how hungry people are all over the earth to hear the Good News of Messiah Yeshua and to hear the Gospel of the Kingdom. It's happening down, God is beaming it down from satellite in outer space so the whole world can hear the Gospel. He is preparing the earth beloved one, for Yeshua's return.

Now I'm gonna pick up here next week, but let me just leave off with this. Daniel said that before the end, he said, "Knowledge would increase upon the earth". Daniel said, "I saw people traveling to and fro all over the world and knowledge had greatly increased". We're living in that time that Daniel saw. Daniel saw that at the end of days people were traveling around the world in a way that wasn't even conceivable during his lifetime. And he said, "I saw that knowledge had greatly increased".

We're living right now beloved one, in the information age. This is the information age. We're living in the spiritual climate that proceeds Jesus' second coming. What should you do about it? Get ready. Jesus told the parable about the 10 virgins. All of them believed, but only five were prepared. What about you and I? Are we prepared? The way to prepare for Yeshua's coming is to live every day for Him, beginning right now if you're not already.