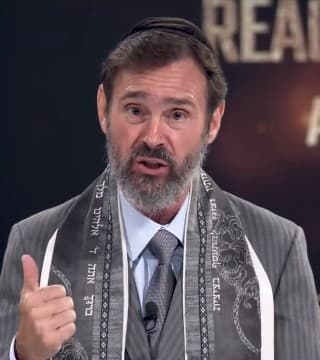 There are two main seasons during the year where the Lord breaks in to our calendar. One of those seasons happens in the spring and the other one happens in the fall. In fact, these holy days of our Creator that take place in the fall are considered the most holy days on the Hebrew Jewish calendar. I remember as a young boy growing up in Cleveland, Ohio, how we went to synagogue. It was such an important time of the year for us as Jewish people, during Rosh Hashanah or Yom Teruah that we're gonna study today, during Yom Kippur or the Day of Atonement. And then we celebrated Sukkot or the Feast of Tabernacles.

All of these once again take place in the fall. I want you to know that there's a window that's opened in heaven for us to connect with God. It's like an opportunity for a special blessing when we unite our hearts and our focus with the Lord our Creator during these special seasons. The Lord actually told us that these were His appointed days. I'm reading now from the book of Leviticus, we call it in Hebrew Vayikra, chapter number 23 verse number 4. The grass withers and the flowers fade, but the Word of the Lord abides forever. Hear God's word for you. "These are the appointed times of the Lord".

Now notice here that it doesn't say that these are the Hebrew holidays or the Jewish holy days. It says, "These are the Lord's appointed times". Which Lord are we talking about? We're talking about not only the God of Israel, but we're also talking about the God and Father of the Lord Jesus Christ. They're one in the same. The point is beloved ones, is that whether you're a Jew or a Gentile, these holy days have application for you, because they're your God's appointed days. Now when we look at this word appointed, listen again, "These are the appointed days of the Lord". What are they appointed for? They're appointed for you and I. They're an appointment for our Creator to meet with us, because He wants to communicate something very special to us on these days. That's why you and I need to be expecting something from Father God during this holy season.

You see Hashem our Creator has set appointments to meet with us and He wants to give us revelation. He wants to impart something to us during these special days of the year. So with that in mind, knowing this is for all of us, let's continue again. "These are the appointed times of the Lord, holy convocations". Now this word convocations comes from a Hebrew word called miqra and one of the shades of meaning of this word is a rehearsal. In other words, these holy days had application, number one in their initial historical context; whether it was thirty five hundred years ago or any other point in scripture. They had application during the initial time that they were given. However they're also prophetic. What has been is also what will be. They are shadows of something to take place in the future.

So when we study these holy days I'm gonna point out number one, what the application was during the initial historical context and then we're gonna look at what is the prophetic meaning? So once again, these are the appointed days of the Lord, holy convocations or rehearsals, which you should proclaim at the times appointed for them. Now we're gonna continue down specifically to the first of the fall holy days that we're gonna concentrate on. It's called Rosh Hashanah, also referred to as the Feast of Trumpets or Yom Teruah. Rosh Hashanah means head of the year, Rosh is head, Hashanah the year. The traditional Jewish perspective is that it was on Rosh Hashanah that God created the world, we'll talk about that. But also we find that there's another dimension to this holy day that has to do with the return of King Yeshua.

Now notice the next verse. "When the sound of the trumpet," where did the trumpet come from? The trumpet beloved, was sounding from the cosmos. The trumpet was sounding from the heaven. The mountain is quaking. The smoke is upon it. Fire is upon it and a trumpet from the heavens starts to sound. When the sound of the trumpet grew louder and louder Moses spoke and God answered. And so what we find here is that right before the Lord spoke a trumpet sounded and when the trumpet reached a climax of volume God then spoke. The trumpet announced the kingdom of God and as we continue to read in this chapter of scripture we find that eventually Moses went up the mountain to meet with God.

So the trumpet announced that God was coming down to earth and then it also announced that Moses, who's a symbol of believers everywhere, went up to meet God. The blowing of the trumpet beloved, symbolizes the rapture. Do you see it once again? The trumpet sounded from heaven, the glory of God then fell upon Mount Sinai, God spoke and revealed Himself to more than a million Jewish people, Israelites that were gathered at the base of Mount Sinai. And then Moses went up Mount Sinai to meet with God. So when we're reminded of something through the blowing of the shofar we have to ask ourselves, "Well what would the blowing of the shofar remind me of"?

Once again, back to Leviticus chapter 23. "In the seventh month, in the first of the month, you shall have a rest, a reminder by blowing of trumpets". And so we have to ask our self, "What would the blowing of the trumpet remind me of"? It would remind a Jewish person, beloved, an Israelite, of how the trumpet sounded from heaven back in Exodus chapter 19 and how God revealed Himself to more than a million Israelites. He spoke and then Moses went up the mountain to meet Him. It's a symbol. It's a shadow of the Rapture.

Now as I indicated, within the world of Judaism Rosh Hashanah or the Feast of Trumpets is not only about this account that prophetically took place in Exodus, but it's also about what Jewish people consider to be the new year. In other words, according to Jewish tradition it was on Rosh Hashanah, that's why it's called Rosh Hashanah. Once again, Rosh Hashanah means head of the year. That it was on this day our mystics and scholars believe in the Jewish world, that that the Lord, that the Creator Hashem, created the world. And so they look at it once again as the birthday of the year.

And so Jewish people greet one another during this time of year with a Hebrew greeting, "L'shanah Tovah, Happy New Year". And we look at it as a time of new beginnings. It's a very happy time of year. But in addition to it being a celebration of a brand new year that we're entering in to, with all types of new possibilities, wishing each other the best, it is also beloved ones, a time where we're getting prepared for the next holy day and the next holy day is called Yom Kippur. And on Yom Kippur according to Jewish tradition, God judges His people. And so Rosh Hashanah begins what is known as the Ten Days of Awe. It begins a time where we prepare to meet God on Yom Kippur where He's gonna judge each one of us and according to Jewish tradition seal our fate for the coming year.

And because Jewish people expect God to judge them on Yom Kippur, the Day of Atonement, which we'll also be studying in this series, they prepare themselves during the time between Rosh Hashanah and Yom Kippur so that they'll get a more favorable judgment. And so this is why we're calling these days between Rosh Hashanah and Yom Kippur the Ten Days of Awe, because Jewish people are looking at themselves seeking to make amends, to make things right, so that when God judges them they'll have a favorable judgment. It's a season beloved ones, of repentance, because when Jewish people go to synagogue at the next appointed day; once again, Yom Kippur, the Day of Atonement, it's no longer festive day like on Rosh Hashanah where we're wishing each other a Happy New Year.

Now Rosh Hashanah begins us to move forward in a season of repentance so that Yom Kippur becomes that time where we're very reverent before the Lord. It's a very solemn holy day. In fact in orthodox synagogues many Jewish people will not wear even their shoes to synagogue to show that they realize how holy God is and how serious this day is. Now I share that with you, because I'm gonna continue speaking on Rosh Hashanah, Yom Teruah next week, but I want to encourage you to begin to prepare yourself. I want you to begin to look to the Lord and ask Him to bring correction into your life in any area that's out of alignment with Him, because in order to receive all that God wants to give us we have to be rightly related to Him.

Now it's true that because of the blood of Jesus we stand before our Creator, we stand before the Lord holy and blameless before Him in love. His love for us is unconditional, that is a fact. But on the other hand we have to prepare ourselves to receive Him. We have to prepare ourselves to be blessed. This is why Jesus said, "If you love Me and obey Me I'm gonna reveal Myself to you and My Father and I will be at home in your life". And so as we get ready now to enter in to these fall holy days I want to challenge you and exhort you to get serious before the Lord, spend some quiet time with Him, spend some alone time with Him. Make yourself completely vulnerable to the Holy Spirit, completely open, not afraid of His discipline, asking Him to show you what in your life needs corrected. Because the Bible says if we examine ourselves we won't have to be judged by the Lord.

I'm not talking about fear, I'm talking about the fact that if we are not walking in obedience, because Father God loves us so much He's gonna discipline us. And discipline or judgment can hurt, it may be painful. Something may happen in our life that needs to happen in order for God to get our attention, but if we'll examine ourselves it won't be necessary for Father to take those measures.

It could be anything. But I'm telling you this, God is continually cleansing us and bringing us deeper and this is a great time of year, in fact it's the perfect time of year to be cleansed by the Holy Spirit in preparation for Yom Kippur. I love you beloved ones. I want to ask you now just to get on your knees. I would get on my knees right now with you, but the camera won't allow me to do that. Just get on your knees right now. Let me lead us all in prayer.