Kenneth Copeland - Your Faith Can Make You Whole 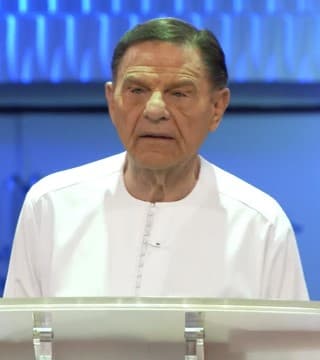 Father, we thank You for Your Word tonight. And as we approach this marvelous covenant tonight, we approach it with humble hearts, thrilled hearts, hearts full tonight with praise and honor for our great God. Thank You.

From the book of James, please. The 2nd chapter, if a brother or sister be naked and destitute of daily food, if one of you say under them, depart in peace, be warmed and filled, not withstanding you give them not those things which are needful to the body, what does it profit? Notice very carefully the 17th verse, even so, faith, if it has not works is dead being alone. I want to call your attention to the word works. Weymouth translation of the New Testament, translates that phrase thusly, in fact, read it directly from the Bible. If so faith, if it has not corresponding action, it's dead. Faith, what is faith? Faith is a spiritual force. It is a powerful, powerful, unseen force. It is the unseen force used by the Almighty God to create the universe. He is a faith God. Faith is generated by the Word of God. Faith comes by hearing and hearing by the Word of God.

Let me say it like this, faith comes by hearing and hearing by the covenant of blood, amen. This book is a covenant book. Covenant God is a covenant making God. Who was the biggest loser, Satan? No. God. God lost His man. God lost the woman He created with His own hands. God had given Adam absolute authority over this planet and His own creating son committed high treason and bowed his knee to the devil, and the devil took over. Adam had a leash on this earth, and as such, he was literally the God of this world. And then by covenant, God brought the blessing on Adam, and then the blessing, the blessing, the blessing came and the blessing of Abraham. How did the blessing of Abraham come? By faith, by covenant. Abraham believed God. Amen, goes right there. Abraham believed God. Having faith in God. Shall we go to the book of Romans please? Thank You, Father.

4th chapter, the 16th verse. "Therefore, it is of faith that it might be by grace; to the end the promise of the covenant might be sure to all the seed". We are the seed of Abraham. "Not to that only, which is of the law, but to that also, which is of the faith of Abraham, who is the father of us all, as it is written, I have made thee a father of many nations before him or like him, whom he believed, even God who what? Whom he believed, even God who quickeneth the dead and calls those things, which be not as though they were", hallelujah, "who against hope believed in hope, that he might become the father of many nations, according to that, which was spoken, so shall thy seed be".

So there my friend, is the blessing and the curse. This is a natural force, comes from the natural world. Faith comes from the spirit world. There is a world of the spirit. It is in this natural world. For God, who is a spirit, created all natural things. Hallelujah. Thank You, Lord Jesus. Now, if we turn to the book of Mark, and we go to the 5th chapter, marvelous, wonderful, the 4th and 5th chapters of the book of Mark flowing together in faith all the way through the 11th chapter. Marvelous, wonderful things, especially these words that fell from the lips of the master. Thank You, Lord Jesus. Praise God. Through this, you can also see the loving life of Jesus, and how easy He is to serve, and how easy He is to receive from. Verse 25, before I read the 1st verse, let me tell you, the reason the Holy Spirit saw fit to put these cases and these verses in the New Covenant is because they are perfect examples of faith. They are perfect examples of faith.

Anyone, are you listening to me now? Anyone that will do these four things that this woman did, can receive anything they want and anything they need from Jesus Christ, the Lord God of Nazareth. Anyone. Absolutely anyone. And a certain woman, which had an issue of blood 12 years, and had suffered many things of many physicians had spent all that she had and was nothing bettered, but rather grew worse. When she had heard of Jesus, came in the press behind and touched His garment. Another account says, "Touch the hem of His garment". Jesus, this is not talking just simply the hem of His clothes. Jesus being a rabbi, wore the clothes of a rabbi and His prayer shawl, would be worn here, so that at a time of prayer, you pull that prayer shawl up, bring it up over your head and in that place, it's called your tent. That came down, so that, it came out just below His top garment.

o it would come right about here. Always, always could be seen. Everybody knew, they did not know He was Messiah, but they knew He was a rabbi. Amen. So she knew that if I can touch the hem of that prayer shawl, she had been taught that that's where the anointing is. The hem of that. "If I can just touch the hem of that prayer shawl, I know I will be made whole". Hallelujah. All right. Let's read, she touched His garment. Now listen. For she said, for she said, "If I may, but touch His clothes, I shall be whole". And straightway, or immediately the fountain of her blood was dried up and she felt in her body she was healed of that plague. Now notice this, the fountain of her blood dried up, but now wait, let's look at it again. I want to make certain and ensure you get this. Immediately, wait a minute. She said, "If I may touch, but His clothes, I shall be whole".

Well, Brother Copeland, He's God. Don't you know He knew who touched Him? No. He didn't function as God. He didn't call Himself God. He called Himself the son of man. He could do nothing without the anointing of God. And we know it was the anointing, because in the 4th chapter of the book of Luke, he said, "The spirit of the Lord is upon me for, He has anointed me to preach". Hallelujah. Glory to God. Most people don't know that Jesus is a preacher. He preached. He taught. Actually taught more than anything else. Taught, preached and healed. Glory to God. Hallelujah. Thank You Jesus. He's a preacher. Hallelujah. He's a teacher, and He's a healer. And He's a same tonight as He ever was, and He will be that way forever. Glory to God. And soon, and very soon, we surely will meet the King. Hallelujah.