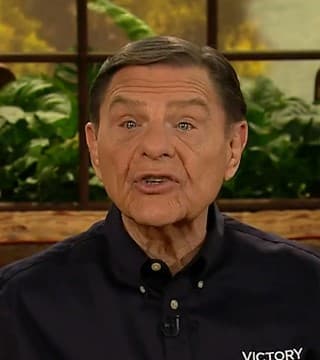 Hello everybody I'm Kenneth Copeland, and this is the Believer's Voice of Victory Broadcast, and it's already Friday. Yeehaw, amen. We've been talking about becoming very, very aware, that you are a spirit. You have a soul made up of your mind, your will and your emotions. In other words, the intellectual part of you. And you and your soul live in a body. Now, Jesus taught something that is so revealing, so revealing. A certain rich man and Lazarus, remember them? It's one of the parable. It was a certain rich man who died. He went into Hell, you remember the story? He looked up and saw Abraham and knew who he was. Had he ever seen Abraham? No.

Now, he's a spirit being, he's still alive. His body is up top somewhere. Listen to what Abraham said to him. "Son, remember"... Where was his brain? I don't know, in his body, but his spirit and soul was still intact and he was in hell. Now, his nature was still the same. "Have Lazarus come and give me water". He still wanted to boss Lazarus around. Now that's a lot of insight into that. His memory was still intact. Here your mind uses your brain. Your brain is part of your physical body. You are a spirit, you have a soul made up of your intellectual system, and you live in a body.

Then 9/11 happened. November after September, we have a meeting every year in the Washington DC area, and have for many years. I'm on the way to the venue that night in the car, and the Word of the Lord came to me. He said, "I want you to strip the fear out of the body of Christ, strip it out. They have no business with it". He said, "You launch a war against fear, the war on fear". Well, I'd been preaching on the love of God and perfected love of God casts out all fear and people... but then, wow, wow, oh, God, oh God, oh God. And I preached on, I don't remember not how long, long time and wound up and then somebody listened. Amen.

Now, let's go over here. Oh, this little book, I've marked it up so that it's hard to read it. But now listen, we're going after revealed knowledge, right? Anybody can read this book and I read it a long time and then it just began to get bigger, and bigger, and bigger. And this little book caused me to get bigger on the inside than I was on the outside. That's what happened to me when I first realized what had happened when I got baptized in the Holy Ghost and began to speak with other tongue. Man, I could talk to God and in a language I didn't understand. Now, let me show you for instance, and all of you at one time or another have studied first Corinthians 12, 13, 14. And I'm just praying along in the spirit and He said, my mind is unfruitful, and I'm just enjoying this.

You pick up on that? See, what was that? That was revealed knowledge. Now listen to this, I was just reading along, just enjoying this, "You're of God, little children," and I've read it a lot of times. You have overcome them, well, because greater is he that's in you, than he that's in the world and he's talking about the devil and the Antichrist. For a long time, a long time until I really got it over to myself the Spirit of God, I called Him the greater one. "Oh, greater one that lives within me, greater one. No, you're so great. You're the greater one".

Oh, God, what does that mean? And believed the love. I know you love me, I believe the love, I have faith in that love, I believe that love. I'm a little baby Christian and His own disciples came to Him and said, "Lord, don't you care? Don't you care that we're about to die here? Lord don't you care? Why do you let death come on me"? He didn't let death come on you, you let death come on you. And I'm going to say to you again like Gloria said, depression, that's grieving when you hadn't lost anything. She said, "Depression is just thinking about yourself all the time, and that's enough to depress anybody". She's got her way, that girl. Hey man, that's enough to depress anybody. Amen.

Now the greater one we've known and believed. I believe the love, I believe it. He loves me, He cares for me. God loves Kenneth, God loves Gloria. Amen. God loves the president, God loves the vice president. I've just got the victory, hallelujah. God loves this nation and He's not done with it. And neither are we. Hallelujah. And this thing got bigger, and bigger, and bigger and I just kept going. There is no fear in love, but for a fact, a growing maturing love casts out fear because fear has torment. Well, who's the tormentor. Jesus said who he is. he said "Devil himself". Well, hey, fear, if there's not any fear there, he didn't have anything to hand on. The torment is the handle. If the fear is there, but perfected love casted out. I refuse to fear.

When Lindsey, our granddaughter had meningitis and Gloria and I were in Colorado, we were headed there too as fast as we could go. But Kelley turned around and looked at her sister Terri. She said they had diagnosed her and they had children dying from it. Right here in Forth Worth in Cook's Medical Center for children. So I already knew what to do on the way home in the airplane. And the Lord simply said to me, "You touch her breastbone and say, 'Lindsey, I speak to the anointing of God inside you and I command it to rise up and drive this disease out of you'". But now when that infectious disease doctor told Kelley, in so many words, "We don't expect her to live overnight". She said, "Daddy, that came down on me like a black cloud". And she just went over there to her sister, Terri and said, "I refuse to fear".

And then Kelley told me, she said, "Daddy that thing just evaporated," and I knew right then she'd live. Well, thank God. For Lindsey, she was 11 years old then and she just gave birth our 10th great-grandchild. Little Colette Olivia. Now that happened over Christmas and little Colette Olivia was born just after Christmas. Yeehaw. Kelley refused to fear. That fear was tormenting her, she refused it and it had to get out. Are you loving this or what? Now, and all things, oh, God, there is no fear in love. Perfected, maturing, love cast out fear. He that fears is not mature in love. We love Him because He first loved us. Glory to God.

And if a man say, "I love God and hated his brother, he's a liar. For he that loveth not his brother whom he has seen, how can he love God whom he has not seen? And this is His commandment we have from Him, that he who loveth God loveth his brother also, whosoever". How many whosoevers are in here? I'm a whosoever and I'm a whatsoever. Whosoever believeth that Jesus is the Christ is born of God. Glory to God. And everyone that loves him, that begat loveth him also If you love the father, you love the children, in other words. By this we know, by this we know, by this we know, we know something here, it's been revealed to us. We know it. Glory to God.

We know it. We're not just believing this, we know it, that we love the children of God when we love God and keep his commandments, for this is loving God that we keep his commandments and his commandments are not grievous for whatsoever is born of God overcometh the world, and this is the victory that overcometh the world even our faith. My Lord, my God. Now, this is the victory. This is the Victory Channel, this is the Victory network. I've been on this since the very beginning, that I'm talking about the very beginning I was in a meeting up in a little North Texas town, meeting in an old abandoned store and I had my outlines in the motel there, and I had them all laid out on the bed, on my knees.

And I said, "Lord"... He said, "Listen to me, you preach and teach victory. Victory in the new birth, victory and the baptism of the Holy Spirit, victory over sickness, victory in righteousness, victory"... And he just named off all of these different things. Victory. I started right then on the radio, on the radio, the Victory Broadcast, then on television, and now on network, and this is a Believer's Voice of Victory broadcast. Amen. So now then, how much time do I have Tim, please? Good, I can do this. "Whatsoever is born of God overcometh the world. This is the victory that overcometh the world, even our faith. Who is he that overcometh the world, but he that believeth that Jesus is the Son of God"?

Do you believe that Jesus is the son of God? Then you are a world overcomer. Whether you're overcoming or not, that's what you are. If you believe He is the Christ. "Well, Brother Copeland, I don't know anything about overcoming the world". Well, that's because you don't know anything about faith. This is the victory that overcometh the world, even our faith. This little book is a faith book. It's a love book, faith book. Amen. And you just keep on going. I want to get down here today. Verse 13, "These things have I written unto you that believe on the name of the son of God that you may know that you have eternal life, and that you may believe on the name of the son of God".

"We know that we have the petitions that we designed on him," and so we can... And let's go back to big John, right there in the covenant meal in the 16th chapter of John, he said, I'm going to just paraphrase this, "Up to now you've asked me nothing, but whatsoever you ask the Father in my name, He will give it". The same man wrote this. So put those two verses together. Hey, what else did Jesus say, whatsoever thing you desire when you pray, believe you receive them and you shall have.

Hey, we got it cornered, we got it surrounded. And any of y'all old enough to know what a round house is, that's where they put trains and turn them around. And a good friend of mine used to say, "Go to round house, they can't corner you there". Well, Hey, we kept this corner. We've got it coming and going, pushing and shoving. Hey, revelation, whatsoever you bind on earth shall be bound in heaven, whatsoever you loose on earth shall be loosed in heaven. Well, if binding doesn't fix it, loose it. Glory to God. Hey, authority of the believer, authority and the power invested in the body of Christ.

Jesus said, "All authority has been given unto me, both in heaven and in earth, therefore you go in my name". Delegated His authority. Now He's in heaven, He doesn't have authority in the earth except through His body. He's the head where the body that authority is in us. Praise God. We know that whosoever is born of love sineth not, but he that's begotten of love keepeth himself and that wicked one touches him not. Glory to God, hallelujah. And we did it.