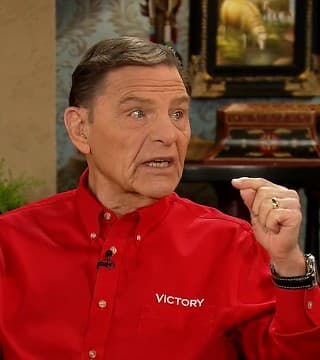 — Hello everybody I'm Kenneth Copeland. Let's have a word of prayer and we get right into today's Bible lesson. Father we thank you today for the word, the word of the living God, the promises of the Almighty God, the El Shaddai God. And we thank you for it. And we praise you for it in Jesus' name today. And we thank you for all of our partners all over the world. Glory to God. And by faith we say it, we have a million partners. Glory to God Because you promised it and we receive it. In Jesus' name. In Jesus' name.

— Amen. Glory to God. Before Greg gets back into this. David, the most covenant minded man of the whole first covenant. As a teenage boy, it wasn't what Goliath said that frightened everybody. It was his size.

— I mean, he's almost 10 feet tall feet, nine feet nine something. He was a monstrous man. But David saw the same thing that they did. He said so what. And then he said to Goliath, "This day, this day the Lord will deliver you into my hand today". I'm gonna kill you today.

— That's exactly what he said.

— He invoked his covenant that had angels involved in it. And those angels saw David's good with that sling, but...

— Boy let me tell you what. The only place right there. Only spot and over he went.

— And then he climbed up on him took his short and cut his head off.

— Yeah, 'cause he didn't come at him with a sword.

— He came at him with a sling and some rocks that he picked up in the brook.

— You come at me with this. I'm coming at you with a covenant.

— Well it's faith and corresponding action.

— He said it because he believed it in his heart and then he killed him.

— Right. And even when after that, they started singing praises about him. Saul has killed his thousands. David, his tens of thousands. Even in that moment, nobody knew the bear and the lion story. He had kept that in his heart. That's the first place he revealed that, when he was proven himself there to the king. Saul was delivered into his hands one night and he didn't kill him.

— He said I can't do it 'cause that's covenant. I cannot touch God's anointed.

— And that's, boy that's something we now more than ever the body of Christ needs to know, Do not touch God's anointed. Even if you disagree.

— Don't don't say it. Don't let it come out of your mouth. David said, "I shouldn't have even cut your garment. I shouldn't have allowed that to happen". And that's a point that David understood.

— Greg Brother Hagan, when he had that experience when Jesus by the spirit took him up into heaven.

— And he made the comment when he flew the first time in an airplane, he said "I experienced this already. I have experienced this" because he said "We went through clouds," but He said He told him, Jesus told him. "Now you're gonna have to tell the people that you saw me. And you're gonna have to tell the people that I put my finger in the palm of your hands". And Brother Hagan said something to the effect. "I'll get so much criticism for telling that". And he did.

— He said, Jesus eyes just flashed fire. And he said, "Who called you"? He said, "Well you did". "Then you answer to me. They'll stand judgment for criticizing you".

— Now who called me to preach prosperity? Jesus did.

— That's right. And I'm not criticizing.

— So the people that criticize it.

— The persecution's not for you. It's for His sake. Jesus said that.

— So then they will at some time or another, have to, well the fundamental principles of the doctrines of Christ or judgments.

— There's more than one.

— Yes sir. Yes sir. When I was with Brother Hagan last time I was with him on the earth it's 2003. We were pastoring in California. And he was at Ed Defrank's Church.

— Marietta. And of course he's in heaven as well. Went up there and was talking to him and somebody asked him a question, went to lunch with him. One of the guys asked him a question, "Brother Hagan, all these ministries that came out from your teaching. You taught them faith. They're all bigger than you now. And of course you were mentioned and others". And I remember he got quiet and he said, "Well, amen". He said, "I've got good seed in the ground". You could not get him to say anything negative...

— Yeah they wanted to kill him.

— They're gonna turn on him.

— I followed you and look what happened. And so David, what does he do? Well, you'll see what he does greatly in verse six. And David was greatly distressed for the people spake of stoning him because of the soul of all the men were grieved, every man for his sons and for his daughters. But David encouraged himself in the Lord His God and David said to the priest. He says I pray thee, bring me hither the ephod. And he brought the ephod to David. Now David, the ephod is what the priest wore. Samuel's not there. There's no priest. There's no one. So he boldly takes the ephod himself and goes before the Lord with it. Now the ephod is that breastplate that the priest would wear, part of his Holy garments, that the Lord was speaking to him. It carried all the tribes of Israel on it. Now this man's about to become the King. And the King he was about ready to fight is the guy he served with his blood brother Jonathan. And he goes before the Lord and puts this on and says, he's wearing all of the tribes. He's of Judah, but he's now "God, I'm coming to you for all of the tribes". I need help. And God speaks to him and He answers him. He says, what shall I do>

— Pursue. And he says, sic-em as we'd say in Texas, I'm learning Texas talk. He sic 'em. And he goes and he pursues him. But he inquired of the Lord. He encouraged himself in the Lord.

— So that's the word that he's walking on.

— When he does that.

— His covenant with God, for instance, Seek ye first the kingdom of God and his righteousness His ways of doing things, and all these things will be added unto you. Now Jesus said that.

— I took that as a covenant.

— It is a covenant. Gloria took that as a covenant at a time when we didn't have anything. And that's when she got born again. She was raised in a church that never mentioned that phrase. She didn't know anything about it. And I was out hunting for a job. I messed up the other one, but my mother was praying all those years for me. Well, of course, then for Gloria. Mother had a covenant with God, my mother, and it was based on I Peter 5. And she said, she threw her Bible down on the kitchen table. She said, "I've prayed for him all I'm going to. If he goes to hell, it's your fault, not mine". Gloria got saved that next week. I got saved two weeks later than that, because she said to the Lord, I certainly do need things. Lord, take my life and do something with it.

— Amen. Cynthia you have a covenant relationship with Joe and so forth and so on. Well, I am very aware of my covenant with her. It's on my mind all the time.

— Because she's on my mind all the time.

— That's right. And she's the one that changed my life.

— For me I'm looking for ways to bless her.

— Because I am in a blood covenant with her in the blood of Jesus.

— That's right. Now see, everything that David's done up to this point is by the flesh. I'll work with him to get where I need to be to do this.

— Just figure it out.

— And I'll figure this out. I got him. And when he got to a point that it was so low that because he was gone. He was in the wrong place at the wrong time. He's even living in the wrong place. He's living with the Philistines. Reminds me a lot living with Sodom. Abraham decided, I'm not living there. I'm gonna put you in the place I'm supposed to be. when you're in your right place, this wouldn't have happened. But David did the right thing. Seek ye first the kingdom of God. He went and he inquired of the Lord. I messed up. I need help. What would you have me do? Do we go after him? What do you want me to do? Because his men are...

— My cross-reference there says when they were getting ready to stone him, that they were bitter.

— They had bitterness in their heart toward David.

— Yes. Their hearts had melted in. I mean, they're just, they're wore out. I've served you all of this way and now look what happened. And you can't let your heart get bitter to your covenant partner, your minister, your covering that you have. You cannot allow that bitterness to get in you at all. I mean, you just can't tolerate.

— Well what did Jesus say? Pray for your enemies.

— Pray for those that despitefully use you and persecute you.

— Because they are actually coming against Him.

— That's exactly right. Yeah, Jesus in His own ministry, they all walked away from Him at one point. He looked at the 12 and said, what about you guys? Are you staying or you going? I need to know. They said, Where would we go?

— They thought about it.

— Sure they thought about it.

— Where would we go? And that's the mentality we got to get that my covenant with Him is so strong. that if you never blessed me another day in my life I'm okay with that. But I know you and I know how you are and you will 'cause that's the way you are.

— And he can't stop me. He can't not bless. 'Cause that's who he is. He is love. And you got to get to a place where though all else turn, I won't turn.

— And it's a new every morning and it endures forever. And he'll never leave you nor forsake you.

— And he didn't with David.

— Even though David is partnering with the wrong people, going against his own covenant, God never left him. Spoke to him right there and told him what to do. Here's what you do. Let me get you out of this. And he's been faithful, He's, man, Brother Copeland, He's gotten me out of so many things I put myself into that he had no part of. But He's faithful.