Kenneth Copeland - How To Press Into Healing 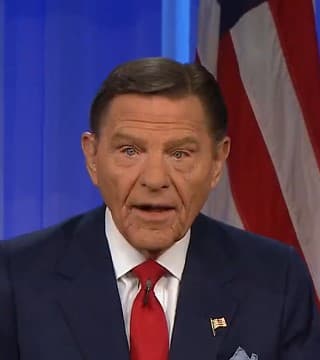 You know, most people haven't realized this, because of the division of chapters and verse and so forth and reference. But beginning with the 13th chapter of John, 13, 14, 15, 16, 17, all right there at that last covenant meal of the first covenant, right there. And I've, so many times I take communion a lot. And I just see myself in my mind just right there. John is on Jesus right-hand leaned up against his bosom. There is this, that Gentilized picture with that big table, get out of here. No, no, no, if they had a table, of course it would have been very, very small, because they were lounging on the floor. And listen to what the master said.

John 14:10, "Believeth thou not that I'm in the Father and the Father in me. the words that I speak unto you, I speak not of myself, but the Father that dwells within me, he does the works". Now, you just read a little bit further, just read a little further. "Verily I say unto you, he that believeth on me, the works that I do shall he do also, and greater works than these shall he do, because I go to my Father". Why? Well, it's just a few days away, on the day of Pentecost. 50 days after that supper, the spirit of God came in great manifestation into this earth. And the scripture does not say, "There was a rushing mighty wind," it said, "There was a sound as of a rushing mighty wind".

I'm completely convinced that you would have heard that sound anywhere, because Jacob's ladder, the angels going back and forth is over, glory to God. And all of the angels that were chased out of here because of what Adam did, all came. Are they not all ministering spirits, sent forth to minister for the heirs unto salvation? Glory to God. That's when he came back into this atmosphere and will never leave again, so that you and I today could be well in our bodies. Amen. Greet two or three people say, thank God the healer's in me, and you can be seated. Praise God. "For the healer's in the house today". Thank you, sir.

Jerry: Can I Interrupt you for a moment?

Jerry: Right after receiving the offering, I went back to sit down there, and the Lord impressed upon me for us to read Luke 4:18 from the Amplified, before we start this. Could they put it up on the screen? Luke 4:18 from the Amplified. "The spirit of the Lord is upon me, because he has anointed me, the anointed one, the Messiah to preach the good news, the gospel to the poor. He has sent me to announce release to the captives and recovering of sight to the blind, to send forth as delivered those who are oppressed". Hold on, back up. "Those who are oppressed".

Jerry: Then go, "Who are downtrodden, bruised, crushed and broken down by calamity".

Jerry: There are people that are watching today, and some right here in this auditorium that come under that category. And the Lord said, "Minister to them first, so that they can be free to receive the Lord".

Jerry: Now in Proverbs 24:10, "If thou faint in the day of adversity, thy strength is small". And we've learned that joy produces strength.

Jerry: So he could say, "if you are fainting in the day of adversity, it's because your joy has been diminished".

Jerry: A lot of people are not able to receive healing, because of things they've been going through, particularly over the last several months. They're downtrodden, they're oppressed. Their joy has been diminished. And I felt impressed of the Lord that we need to minister to them first, so that we can get that spirit of oppression off of them, so that they can receive the Word.

Kenneth Copeland: Now, right there, right there in that same room, Jesus said to them, "And in that day you shall ask me nothing. Verily I say unto you, whatsoever you shall ask the Father in my name, he will give it you. Hitherto have you asked nothing in my name, ask and you shall receive that your joy maybe full".

Jerry: That your joy may be full. Yeah.

Jerry: Those of you that are watching, if you come under the category I just mentioned, then I want you to stand to your feet, and stretch your hands out toward your television set or your iPad or whatever it is you're watching. And any of you in here that are under that category, don't be embarrassed by standing, God wants you to be free, so that you can receive the Word.

Jerry: Father in the name of Jesus, by direction of the Holy Spirit, we speak to the spirit of oppression, the spirit of heaviness, the spirit that causes people to become downtrodden and lose their joy, and we take authority over that spirit. We command its departure. We command release to come to them, because that's what Jesus said he came to do, to bring release. And in his name, we decree that you are released from oppression, being downtrodden, being...

Jerry: Diminished in your joy. And we decree in Jesus' name that you are free, and you are free to receive the Word of God today. And not only will you be delivered from oppression,

Jerry: But every symptom, every sickness, every disease in your body,

Jerry: Will respond to the anointing of God on his Word, and you will be set free in those areas as well in Jesus' name and give the good Lord good shout if you receive, hallelujah.

Now, there is no such thing as non belief. You're believing something all the time. If you're thinking you're believing. We're spirit beings and spirit beings think and believe. And just a little simple, there is belief which is faith, and then there's unbelief, that's not non-belief. Unbelief is believing the wrong thing. Unbelief is not believing what God has already said in his Word. Faith is believing what he's already said in his Word. Amen.

Well, I'm impressed of the Lord to turn over there to the book of Philippians right quick. And thank you Lord Jesus. Thank you, Father. Ooh this little book. Sometimes I just get lost in it. And like I said yesterday, 19 times joy is used in one form or another in this little book. And this man was up to his waist in sewage and nastiness, when he dictated this letter. Isn't that amazing? What an amazing man of God, hallelujah.

Now, let's go to the third chapter. And there are some words here we need to look to. 12 first, "Not as though I had already attained, either were already perfect or mature, but I follow after if that I may apprehend that, then I may take hold of that, for which also I am apprehended of Christ". That I may take hold of. He took hold of me and I'm taking hold of that. "Brethren, I count not myself to have apprehended". Now, wait a minute, there are no punctuation marks in the Greek text. They don't happen. There is no commas. There is no semi colons. There is no colons, that's all in English. Amen.

Now, listen, the devil puts on the pressure, right? And I noticed, I press. You can press. You can press. Faith puts pressure on him. Joy puts pressure on him. Ha ha ha devil, I press. I put pressure on you in the name of Jesus. You bow your knees. Glory to God. I press towards the mark for the prize of the high calling of God, in the anointing of Jesus. Praise God I press this morning. I press, into that place where the healing is.

Now, hang on a second, let me reorganize here for a moment. Healing belongs to us. Healing belongs to this nation. So 2 Chronicles, turn over there with me. Thank you Jesus. Great, familiar scripture. Most people begin reading of course with the 14th verse, but it doesn't begin with the 14th verse, it begins with the 12th verse. "And the Lord appeared to Solomon by night". He appeared to him by night, "And said, unto him," read this out loud with me. "I have heard thy prayer and have chosen this place to myself for a house of sacrifice". I have heard your prayer. I have heard it. I have heard it.

My Dad, this man was his medical doctor. He was Chinese, medical doctor, and a really funny man. He was talking to my dad and he said, "Very easy, very easy to get body well. Take head off, put on shelf, get well, put head back". Put head away. Put on shelf, get well, put head back. Why? Because the pressure is in the mind. The pressure's in the mind. Well, I don't understand that Brother Copeland. Well, all you have to understand is they put you to sleep, you don't know anything about it. See where pain is.

Now, healing is a process, divine healing through the working of miracles, which we will have today, through the working of miracles, that process is speeded up and it is sped up in some cases to the point where it's just instantaneous. It's just happen, like the woman with the issue of blood. It happened and then she felt it. Amen. That process can be speeded up, so that it doesn't take anywhere near the time that medical science said it should take.

Healing belongs, as I said to the nation. "If I shut up heaven and there be no rain or if I command the locusts to devour the land," the land, say the land. "If I send pestilence among my people, if my people which are called by my name shall humble themselves and pray and seek my face and turn from their wicked ways, then I will," I will, that is a covenant statement, spoken by a covenant God with his covenant people. And this nation, this United States is a covenanted people to God. This nation was created by a people for the express purpose of worshiping him. No, you think he's gonna forget that? He can't forget that. It's ever before his face. It's ever before his face, like the rainbow is ever before the face of God and the covenant that he made.