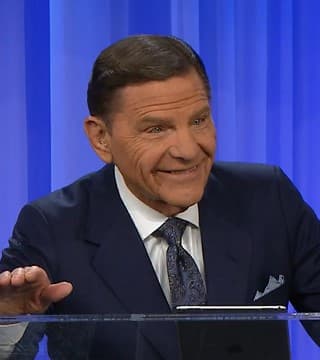 Now, we talked about that this is not the end. It's not the end. And we talked about the fact that, in Zechariah 4:6 that the mountain would be made flat. Hallelujah, glory to God. Amen. And I mean faith people know that. We're gonna talk about that some more later. "Whosoever shall say to this mountain, be thou removed be be thou cast into the sea in that not in his heart to believe that those things which he says shall come to pass, he will have whatsoever he says". So mountain be gone, now, why cast into the sea I questioned the Lord about that. I said, Lord Jesus, why did you put that like that? He said, because once it's gone into the sea there's no evidence that it ever existed. You can't see it anymore. Thank you, Lord. Amen, I said, amen.

All right, now then. We talked about not despising small beginnings and so forth, but now then, I'm gonna read to you from John 6: 1-14. I'm gonna read it from the New Living Testament. "After this Jesus crossed over to the far side of the sea of Galilee, also known as the sea of Tiberias. A huge crowd kept following him wherever he went because they saw his miraculous signs as he healed the sick. Then Jesus climbed that Hill, sat down with the disciples around him. Nearly time for Jewish Passover celebration. Jesus soon saw a huge crowd of people coming to look for him. Turning to Philip he asked". Are you listening? Are you listening now? Where, say where. "Where can We buy bread to feed all these people"?

Now that's all He said. Where, say where. He was testing Philip. Why's He testing Phillip? He's seeing if he's listening. "For he already knew what he was going to do. Philip replied, even if we worked for months we wouldn't have enough money to feed them". He was not listening at all. The crowd was too big. Work for months we couldn't feed them. Well, of course Jesus already knew. "Then Andrew, Simon Peter's brother, spoke up. There's a young boy here with five barley loaves and two fish, but what good is that"?

See, he caught on but then he just talked himself out of it. The crowds too big. This thing is too big. We've got a Goliath we're facing here. This thing is too big. Then, "He said, tell everyone to sit down. They sat down on the grassy slopes. The men were numbered about 5,000. Then Jesus took the loaves, gave thanks to God, distributed them to the people. Afterward he did the same with the fish and they all ate as much as they wanted. Every one was full. Jesus told his disciples, now gather up the leftovers so that nothing is wasted. So they picked up the pieces and filled 12 baskets".

Now, there are two Greek words for basket. One was the little boy's lunch basket. One is the basket you remember that they put the apostle Paul in and let him down over the wall. That's the baskets that are used here. 12, isn't that what that said? 12 baskets big enough to put a full grown man in. And it all belonged that little boy. He came out very well. He came out very well. I get to heaven, I'm gonna speak to that young man. Thank you Jesus. Not listening.

Now, my father in the Word of faith, Oral Roberts, he would stop you and have you repeat word for word what he said. And you'd be surprised how hard that was to do because you weren't listening. You're either thinking ahead of him trying to figure out what he's gonna say. Some of you not listening too much to me now because you can't figure out why I'm wearing blue all the time, really. Come on back with us. Not listening. Philip was not listening. A very long time partner to this ministry in East London, South Africa. And we were supposed to be there. I was looking so forward to dedicating the dome and of course, you know why we couldn't go, but it's on the schedule next year. Praise God, 2020 W O N, Amen.

So, in praying, this old dilapidated old warehouse thing. Well, let me show you some pictures here. See that? At one time, this thing had been a sheep warehouse thing, they sheared sheep there. And it had been abandoned for years and years. And the Lord told him to buy that, and told him how much to pay for it. So he's listening, he's listening. And we drove all through that thing and he's telling me right there, that's Andre right there pointing out to me all of this. And he's telling me, "There's not gonna be any girders and it's gonna be a dome".

And I'm smiling thinking, yeah I'm glad you're a man of faith. But now he was on this trip. He was one of the first to sow the size of seed that he sowed into that Citation X, a million Rand. Well, the Krugerrand. South African Krugerrand, which was at that time, something like 850,000 US dollars. So the seed was in the ground. Amen. So, but he's listening. He's listening, he's listening. Now, the Lord said the money is in the floor.

Now, these people wanted more money for this place. And he said, "No, I'm not gonna pay that". They said, you're not? He said, "No, I'm not gonna pay that. I'm gonna pay this". Well, maybe we won't take that. "Well, yes you will. The Lord said, this is what I'm gonna pay and you're gonna to take this". And so they did. Well, they take nearly anything, cause they didn't think this thing could be used for anything. On the outside it looked even worse than it did on the in. Just a huge tent barn looking thing. The money's in the floor. And he kept thinking, there's gold? The money's in the floor.

Now, this floor was taken up and that was underneath that floor. This wood is so old. It's such fine, fine wood and makes the most gorgeous furniture. People just give nearly anything. And guitar makers are giving nearly anything to get their hands on it. It's just priceless. It's illegal to sell. You can't cut those trees anymore. 50, Holden Hanley, 50, 18-wheeler loads of it. Old floorboards packaged, ready for transport to Cape Town. I said, Andre Roebert, how much was it? He said, "More than enough". Show us the other pictures, please. Isn't that amazing.

See the faith sign up over the top. Hallelujah. That's that same old warehouse. And now everybody in East London their mouths are hung open. He was listening. He was listening. You haven't finished praying till you listen. Till you listen. And I must go back. Oral Roberts had had this happen to him so many times, where he'd give someone specific instructions and he'd come back not done that way. So if you came into his office, the first thing he had a big plaque on his desk, no small plans made here. He would take an easel and just large white pad. And he'd say, "what did I say? Well, you write it on there, rewrite what I said".

It's amazing how you have to write it three or four times, unless you learn how to listen the first time. And stop your own thinking. Stop your own thinking and Listen. How many of you are hearing what I said. About four or five hands went up. Don't be slow to respond. You picking on me, oh yeah. But Brother Copeland you're just too picky with words. Ah ah, we're in training. We're in training. We have to be picky because every word means something. Every word means something. That's the reason people like, every word, that's the region, every single solitary word is so thought out before it goes into congressional records because 50 years from now, somebody will make up something that you didn't say and try to put origin in your mouth.

Our little constitution, you can sit down and read it in a few minutes. Those words, one of the most powerful documents other than the Bible, ever written. Because it was written on top of a Bible. Every word in it came out of the Bible. All of it. You can find every word in the Word of God. Every word of it. I used to carry a little copy with me around in my Bible case. And you want to see what the second amendment says? You get it, read it. Well, what about the separation of church and state? It isn't in there. It's in the Russian constitution, but it's not in there. It isn't there. It came out of a personal letter. And it was not in favor of the government. It was in favor of the Baptist to whom that letter was written.

And of course the do nothings get a hold of it, twist it and turn it, trying to make it say what they want to have it say. But just get that little book, you can carry it in your pocket. It is the oldest governing document, our oldest governing document in the world that has governed a nation for this many years with having never been changed. And there are people fighting to change it every day because it doesn't say what they want it to say. I don't care. It just says what it says. And you need to be listening. You need to be listening to this document. Amen. It's just magnificent.

And I'm glad I'm an American. No, I'm thrilled to be an American. It's so amazing to me. A German is a German because he's from Germany or his born of German parents. A French man comes from France or born of French parents. A Jew, no, no, not a Jew, an Israeli, but all Israelis are not Jews. It's the closest thing, Amen. But I'm an American. Because I was born. Now, wait a minute. I wasn't just born in America. I could have been born in Mexico and been in North America. I was born in the United States of America. That's huge. Amen.

So Father, in the name of Jesus, we pray over this offering tonight. And of course we thank you for revealing to each person in the sound of my voice, here in this congregation or in other places, watching on the Victory Network, watching online, wherever they are. You will reveal to each one of them what is their part of the finances of this ministry. What is their part? How do you want them to sow it? What do you want it to be? What is your desire father? Because you already know what's on the other side of their faith. You already know. Like Roebert and Ginny, you knew already. You knew already when you told them that they must buy that facility. You knew already what that floor was. You knew it already. And it was your desire to put it in the hands of a faith church, faith people, because of what they do throughout the whole continent of Africa on television and in that great church, and we thank you for it. We praise you for it. In the name, in the name, in the name of Jesus.
loading...