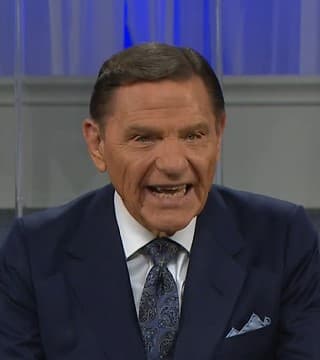 Let's go there now. And faith will not work in an unforgiving heart. In the fifth chapter of the Book of Mark, verse 25, "A certain woman which had an issue of blood for 12 years", she's been shut in for 12 years, "and had suffered many things of many physicians and had spent all that she had and was nothing better, but rather grew worse. When she had heard of Jesus, came in the press behind and touched His garment". She touched His prayer shawl.

"She touched His garment, for she said, 'If I may touch His clothes, I shall be whole.' And straightway, immediately, the fountain of her blood was dried up and then she felt in her body that she was healed of that plague. Jesus, immediately knowing in Himself that dunamis had gone out of Him", power, "turned about in the press and said, 'Who touched my clothes?' His disciples said unto Him, 'You see the multitude thronging. Then sayest thou "Who touched me"?' He looked round about to see her that had done this thing. But the woman, fearing and trembling," fearing and trembling.

We have no idea how long this took. We don't know how long, boy, once she is free, then talking about all those doctors and talking about her money, we don't know what she told about how much money she had. We don't know what happened to her husband. She might have gone into some of that. But Jairus just stood there, 'cause he'd already said, "You come, lay your hands on my daughter, and she will live". That's all he ever said. And right there while He's talking to that woman, the death messenger came and said, "Don't trouble the Master any longer".

But wait, what did Jesus say in the 34th verse here? "He said unto her, 'Daughter, thy faith, your faith has made you whole.'" Wait a minute! Now wait, her faith? Yes, her faith, her faith. The anointing, we know that it was that healing anointing in and on Jesus that healed her body. But there were other people touching Him. Faith gave action to that power. The anointing of God and the faith of God are kindred forces. They work together. Amen, hallelujah. They work together. The faith of God in her reached out and activated that anointing that's in and on Him. Her faith made her whole.

Wait a minute, it didn't heal her. It made her whole. That means we're doing something about the financial situation. You can be healed and your finances still be sick and be in a worse mess. It made her whole. And in just a matter of time. It was just a matter of time. Her body's supernaturally coming well again, and so she's supernaturally back over in the financial world. Amen, glory to God. Her faith made her whole. So she could not have held anything against those doctors. There's no way she could have held anything against anybody whatsoever. She just had her eyes on Jesus. Isn't that good? Fundamentals of faith. Faith will not work in an unforgiving heart.

Galatians 5:6 says faith works by love. Abraham's blessing, the third one, Abraham's blessing cannot be received with Thomas' faith. Cannot be done. Second Corinthians 4:13. "We, having the same spirit of faith, according as it is written, according as it is written I have believed and therefore have I spoken. We also believe and therefore we speak".

Let's look there in the 16th verse. "Wherefore henceforth know we no man after the flesh. Yeah, though we have known Christ after the flesh, yet now henceforth know we Him no more. Therefore, if any man be in Christ, he is a new creature, old things have passed away, and behold all things become new and all things are of God, who hath reconciled us to Himself by Jesus Christ, has given unto us the ministry of reconciliation to wit or to know that God was in Christ reconciling the world unto Himself and not imputing or holding against him their trespasses, has committed unto us the word of reconciliation. Now then, we are ambassadors for Christ as God did beseech you, we pray in Christ's name that you be reconciled to God". That you be reconciled to God.

Cross reference there says or like unto Him. Or in other words, like God in His presence. "Who quickeneth the dead, and calleth those things which be not as though they were. Who against hope believed in hope that he might become the father of many nations according to that which was spoken, so shall your seed be. And being not weak in faith, he considered not his own body now dead when he was about 100 years old, neither yet the deadness of Sara's womb. He staggered not at the promise of God through unbelief but was strong in faith, giving glory to God, being fully persuaded what He'd promised He was able also to perform".

My being a Native-American descent, I wanted a blood brother so bad. I was an only child to start with. I wanted a blood brother. And my mother, because of, well, she was on the basketball court and her appendix ruptured. I have a very, very old photograph of my mother in her basketball uniform. Of course, it went way down to here, and it had plumes and she had on her tennis shoes and her headband, and it said "Union High School". Little old country, little old country, I don't even know whether it even exists anymore. Union School, and there was some debate whether or not the girls should play basketball. After all, it's not all that ladylike. But her appendix ruptured on the court. The appendix scar, back there then, it wasn't just a little scar like it is now.

Boy, this thing was, she was just cut open. Well, the doctor didn't even sew her up. He just used cadaver clamps. He just cleaned her out 'cause she gonna die. Well, my mother was a prayer even then. And my dad's sister and my mother were the same age, and they would pray together. And they'd go down to the storm cellar and pray. I said, "Aunt Barbara, why did you girls," there was another one of the girls, "why did you go down the storm cellar"? She said, "Kenneth, we get to praying and we get happy and start shouting". And she said, "People would've called us crazy". She said, "They'd have put us away someplace".

Little old girls shouting around like that. What's the matter with you? Well, again, did you get anything out of this tonight? Stand with me, please. Thank you, Lord Jesus. Lord, we praise you tonight. We worship you tonight. And for all of those, should there be someone watching online, someone watching on the network, this Jesus that we're talking about, our spiritual protector, this inward power, greater is He that is within us than he that is in the world. The Apostle John, the closest apostle of all the apostles, was the Apostle John. Closer to Jesus than all of the others. And he's the one that said that. He's the one that said, "Greater," and he was talking about, he was talking about evil spirits, and he said, "You have overcome them, little children, because greater is He that is in you than he that is in the world".

If you've never accepted Him as Lord, He's just right there. I read that verse tonight. If you believe in your heart that God raised Jesus from the dead and you confess Him as Lord over your life, the scripture said you shall be saved. The Greek word "sozo", which means saved, delivered, healed, made sound and whole in your spirit being. He'll heal you just the same as He'll save you. And He's right there. Jesus went into hell and paid that terrible, awesome price, suffered there three days and three nights in the great exchange.

Brother Copeland, you don't know what I've done. No, but you have to know what He's done. The prophet Isaiah prophesied about it. And he said, "I even, I am He who blots out your transgressions for my sake, and I will not remember your sins anymore". I will not remember them. That was God speaking through the mouth of Isaiah the prophet. And Jesus said, "Anyone that comes unto me, for no reason will I cast him out".

The only thing he couldn't do and can't do, He won't, He did all the hard part, went to hell, paid the price, suffered that terrible, awesome death of the cross, But He can't pray your prayer. Just put your hand over your heart, indicating before the heavenly Father and before the Lord Jesus Christ that you mean every word you're saying. Oh God in heaven, and you say it out loud where you can hear it. We're gonna lead you to the throne of grace.

Oh God in heaven, I believe with all my heart that you raised Jesus from the dead just for me. I receive you, Lord Jesus. Come into my heart. Take my life and do something with it. I give it to you. And I receive you in this exchange. Fill me to overflowing with your precious Holy Spirit. I fully expect to speak with other tongues in a supernatural prayer language, a supernatural praise language, just like they did on the day of Pentecost. And just tell Him now, Lord Jesus, I love you. I love you, Jesus. I love you, my Father. Thank you, thank you. I rebuke you, Satan. Jesus is now my Lord. I resist you. And the Bible says you will flee from me right now. Thank God the past is over. My future just began today. Thank you, Lord. Now, just begin to praise Him, praise Him. I'm a believer, I'm a believer. I'm a new creature.