Kenneth Copeland - The Keys of the Kingdom 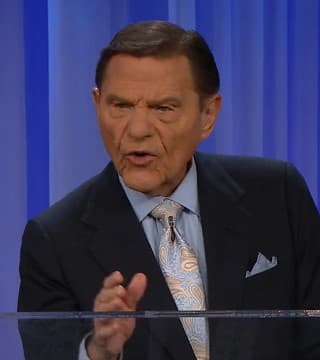 I'm going to Zechariah 4:6. Now I'm gonna be reading out of the New Living Testament. One thing that you need to grasp, hang on just a second. Is how many times, in Zechariah, in their rebuilding, over and over and over and over in that book, the Word, the Lord of Hosts is used. Jehovah Sabaoth, one of the redemptive names of God. Not sabbath, Sabaoth. The Lord, of the angelic armies of God. And of course, there was an angel, carrying on this conversation with him. And the interesting thing about this is, the record time they, the power of God came on everyone there. It was supernatural the way it was carried out. But we know because thus sayeth the Lord of Hosts, thus sayeth the Lord of Hosts, there were angels involved in this, not just the angel of the Lord that was speaking with him.

Man, there're angels all over the place, doing what they do. Well, this room is filled with angels right now. Absolutely. Every person, according to Jesus, every person has an angel. Well, they didn't go away when you grew up. Did they? No, of course not. And this force that is available, is super available in the financial realm. In the little book of Malachi, the little book of Malachi, the tithing book, Lord of Hosts is used 22 times in that little book. Angelic forces. Well, they are super involved in our finances, but only according to your and my leadership.

Well Lord, it's got it. No, no, no, no. Let me remind you of something. You remember there, when Jesus said, what in 16th chapter of Matthew, "On this rock, the rock of revelation will I build My church and the gates of hell will not prevail against it". Remember what He said? "I give you the keys of the Kingdom and whatever you bind on earth is bound in heaven. Whatever you loose on earth is loosed in heaven". I gave you the keys, whatever you lock on the earth is locked up and whatever you, in heaven, whatever you unlock, you, me. Amen. Now, let me read just to you, and, hang on just one second here. Okay. All right. That sounds strange, everybody open your iPads. I don't know. Somebody said you're old school, that's right. I'm old and I went to school so.

Now, just listen. "Then he said to me, this is what the Lord says to Zerubbabel, it is not by force, nor by strength, but by My Spirit says the Lord of heaven's armies". Woo. Amen. "Nothing, not even a mighty mountain will stand in Zerubbabel's way. It will become a level plain before him. And when Zerubbabel sets the final stone of the temple in place, the people will shout, may God bless it, may God bless it. Then another message came to me from the Lord. Zerubbabel is the one that laid the foundation of this temple and he will complete it. Then you will know, that the Lord of heaven's armies has sent me. Do not despise these small beginnings. For the Lord rejoices to see the work begin, to see the plumb line in Zerubbabel's hands", small beginnings.

Now, what does this have to do with our offering tonight? Everything. A lotta stuff has happened, all year long. There are people that have just been wiped out, and it's beginning again. Well, well, I don't know what I'm gonna do. Well, first thing you need to do shut up. No, don't go there. No, don't despise where you are. Just don't stay there. Don't despise where you are. I remember an old country song, "Yesterday is dead and gone. And tomorrow's out of sight". Right now. It's what you and I loose. It's what you and I bind. It's earth's move. God's already done His part. None of this stuff caught Him off guard. There's just some of us kinda slow that's all. Slow catching up. No, it didn't catch Him off guard. Not ever.

Well, Brother Copeland, why hasn't He done something? He just, I just got to telling you, Jesus said He gave you the keys of the Kingdom. Let me, remind you of something. Bill? The janitor has a key to the bank. But that's all he can get in is the broom closet. He can get in the door, that's far as he's going. He doesn't have the keys of the bank. The president of the bank, and the owner of the bank, can get into everything, including the vault of the bank. Are you hearing? The keys of the Kingdom. Hallelujah. We have the divine authority, with the power tools of heaven. The power tool, that name. It locks and it unlocks, it is the key to the treasure house of heaven.

Now, and there's some things that we're gonna deal with, concerning these things, later on, as we go rest of this week. Those keys, have to be used. Well, what'd I do with my keys, huh? Where'd I leave my keys? Well, you're not gonna get in there Clyde, less you can find your keys, brother. What is the main, what is the main, the main thing is it the name? No. It's the covenants in which the name is invoked and locks and unlocks your treasure house. It doesn't, we're not dealing with yesterday. We're dealing with today. Amen. We're dealing with the results of yesterday, but think about it. You know this, and I know this, whatever you have today is the results of what you said yesterday.

Well, I tell you what, I tell you what, you need to turn that air conditioner, I'm telling you, turn that, fix that thing 'fore I get pneumonia. What did you say? Shut your mouth, what did you say? Well Brother Copeland, what is that a harm? And your angel said, what in the world does she want with pneumonia? We can't help her get that. We can't even help her get rid of it. She won't let me. Huh? Covenants. The key. The keys, of the Kingdom, start with the covenants, beginning in Genesis with blood. Even Adam's name, is red. His name is blood. The blood covenants. We have overcome him by the blood of the Lamb and our words.

The words of our testimony, the words of our confession, the words of faith coming out our mouths, glory to God. Hallelujah. And it certainly has everything in the world to do, with heavenly economics. So, I'll, don't despise, small beginnings. Now, this is not the end. What do you say? Lemme get that back. This is what the Lord says, "It's not by force nor by strength, but by My Spirit, says the Lord of heaven's armies, nothing, nothing, no thing, nothing, not even a mighty mountain will stand in Zerubbabel's way. It will become a level plain before him". "Whosoever shall say, unto this mountain be thou removed and be thou cast into the sea and shall not doubt in his heart, but believe that those things which he says shall come to pass he shall have whatsoever he says". Flatten it. The mountain of debt, flatten it. Amen. Glory to God.

Then start again. And we're gonna discuss some more of these things as we go. But I wanna say this to you. It always, it doesn't go very far away from me all the time. The first partner meeting I was ever in, with my father in the faith Oral Roberts I'd never heard anything like that in my life. And I thought, this is the most wonderful thing I've ever heard of in my life. And you've heard me tell it and over and over again. Well, you about to hear it again. And I was driving the car, and a man and, but it's a partner service. Whoa, and I heard he's gonna pray for me every day? He's gonna pray for me every day? And he would, go out and preach glory to God give an invitation and just thousands of people would come to the Lord. And he would lead them in prayer. And then he would come back.

But between there and the invalid room, you know, large crowds make really, really sick people nervous. And so they had a little table with a black curtain around it and he would hold his, the names of his partners on microfiche and the, some of you kids may not know what microfiche is. And this was originally invented as a way to store things on film. You could take a picture of a newspaper and then take the negative and draw it down to where it was micro size. Well, and then he would, you know lay his hands on his partners. Well, then came USBs. You're in here. So I just carry you around my pocket. Amen. And, staff brought in the books and all the books are like this, and there's two or three of them that are just huge like this.

But then, I pray for my partners there. Praise God. And he had, they had the little manilla envelopes, little church envelopes, with a little wooden pencil in it. And you could fill out your thing. And he was talking about $10 a month. And now tell me that's small beginnings here. And I didn't have $10. In the world, I didn't have $10. So I thought, hey, that pencil is mine. And so I filled out a little envelope for $10 a month and stuck it in the envelope and started to leave. And just as I started, and we're in Georgia. And as this woman said, "Hey, hey you". I'm turning around said, "Yeah you" and she was sitting right about over here. She said, "The Lord been where, wanting me this whole meeting to give you $10".

An African-American woman, I would judge probably in her, maybe thirties, probably about my age. And I get to heaven I wanna meet that woman. I said, oh give it here lady. I got my $10. Got my pencil, stuck it in my pocket, I'm a partner. But literally, literally, and I went home and told Gloria we're partners with Oral Roberts for $10 a month. She said, "Kenneth, where are we ever gonna get $10 a month"? And so I said, "Sit down here girl".

And we're still doing that, only it's considerably more than it was back then. But you see that small beginning. The only thing that'll foul up a small beginning, is start backing up. Don't ever back up, just don't ever back up and just keep going forward. But Brother Copeland, I can't, that's right. That's right. You can't. You said you couldn't, so you can't. That saying stuff doesn't work for me. It just did. Say that, covenants, name and mouth. It's all connected, in the spiritual system. Amen.

Father, we thank You tonight. We give You praise and we honor the fact, that You have, seen fit, to turn the operation of this planet over to human beings. Because You have more confidence, in us than we do. And especially those of us, that know You as Lord and Savior and especially those of us, that walk in a place of faith before You. And we are so grateful to You for it. I'm asking You to reveal to each one of us, not only here who're present, but those online, we ask You to reveal to each one what is their part, of this offering and the finances of this ministry. And we thank You and praise You, with all of our hearts, because You are the God of the heavenly armies and that heavenly army, is standing ready to take care of business financially for us. And we thank you in Jesus' name. Amen.
loading...