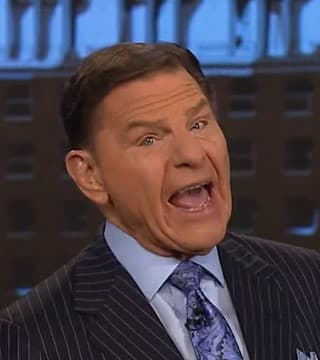 In the healings of Jesus, that I talked about Monday morning when we first came. There are actually 19 of them in Matthew, Mark, Luke, and John. And of course there were thousands and thousands and thousands of healings in Jesus' ministry. But these are healings that, the Spirit of God used as examples. So that anybody that will do these things, can receive the same thing that the person that received it on that day. Amen. And of course it opens our eyes into spiritual depth. Thank you. Somebody's lungs were just healed right lung. Glory of God, I don't know whether it is here or online. Let's stop for a minute. Just put your hands on your lungs. Well, that's COVID-19 for somebody. I mean you're healed. Glory to God, Glory to God. Yes, yes, yes, yes. Yeah, I receive that Lord. Yeah, I know that he's healed.

Did everybody look in the mirror today? You bunch of liars, you sit there without your hand up. Have everybody look in the mirror today? You know, I'm having fun with you, but at the same time, I'm serious about it. So, first thing, I haven't combed anything. I haven't shaved anything. I haven't brushed anything. I just looked there in the mirror, and I said, "surely Jesus, bore our sicknesses and carried our pains". And I went through that scripture. It's just like I read this morning, each one. Not our, I'm talking about Gloria and me. We're one. And I said. What beautiful hair! Hair, grow. Dark brown. Thick be. No bald spots. Dead hair follicles, live, and not die, be a testimony.

Jesus said when he was on earth, "That the hairs on my head are numbered". I make a faith claim for the exact number of hairs on my head that I had when I turned 30 years old December the sixth, 1966, and stepped into the perfect will of God at Oral Roberts University. And I'm still in the perfect will of God, thank you. And praise God my hair is strong. And 2056, when I'm 120, it'll be as strong. I'll have more hair than I have now. It'll be stronger than it is now. I'll be healed and well, just like I am now. And then I'll come over, "himself bore my sins in his own body," when I am still looking at myself right in the mirror. "He himself bore my sins in his own body, on the tree. And by his stripes, I was healed". By his stripes I was healed. And I go through the organs of my body. By his stripes I was healed. Glory to God.

Keith Moore was ministering to a man and the Lord let him know that he didn't... This man was, he was on his death bed. That, he did not have the faith to come on up there where Keith was. And after a little while, praying in the Spirit 'cause he was ministering to this man. From there he ministered to him a little every day. He'd go by and see him. He said, can you believe and agree with me? Because they said, "He's dying. He has to die. We don't know why he's alive". He said, can you agree with me... Oh Yeah, thank you Lord, they were saying, "He's getting worse every day".

Every day, I believe it will be better tomorrow. I believe I'll be better tomorrow. I believe this went on for several days. Several days went by and they said, "He's getting a little better. every day". And one day when they said, "Oh, he checked out, he's well" He just kept getting better and better and better and better. Then just went home. Praise God. So attend to my Word, put that first, do that first. It has final authority. It's more important than anything else that you can do. "Incline your ear unto my sayings". What he says is right and true. And he is right. And it came as a massive revelation to me one day. Driving down East Lancaster Boulevard in Fort worth, Texas, stopped at a signal light. And it dawned on me.

My God is smarter than I am. What's the use of me arguing with him. He's smarter than I am. He knows more in 30 seconds than I can know in 30,000 years. He's been around a long time. He's seen a whole lot of stuff, but he knew what was right before there ever was any stuff. Long time before December the sixth, 1936. Amen. Glory to God. So incline your ear to his sayings. If he says, "You're healed". You are healed. If he says "You're rich". You're rich. I remember.

Of course, our big problem wasn't sickness and disease. It was money. We were there. At ORU and oh my, well, you've heard the story, no use me rehashing that. What? What? That can't be true! But it is. "There's neither Jew nor Greek, bond or free, neither male nor female for you're all one in Christ Jesus. And if you be in Christ, then are you Abraham's seed and heirs according to the promise". Abraham's seed. Heirs according to the promise, What does that mean? I didn't know there's blood involved in this, back in those days. So I said, if I'm an heir according to the promise, I better check out Abraham here. And I went over there and said, God made Abraham very rich. Thank you, Lord Jesus.

Thank you Jesus. Yeah. Yeah. Yes. Yeah I'm gonna do it. Put your hand on your head like that. Bald spots I call you gone. Hair. Grow. Ha, ha, ha, ha. Hair. Grow. Our healer he's is in the room. Glory to God. Healing is happening. Healing is here. Glory to God. Hallelujah. Thank you, Lord Jesus. I'm telling you this lung thing is big. This is just huge. It's going out all over the... Oh, hey, you know what we're gonna do? We're going to intercede. Put your hands on your lungs and shout this with me. "COVID-19, I curse you. Get out of here. Get out of my lungs. Get out on my body. I am not sick. I am the healed. And the devil is trying to take my health away from me. But you can't have it, principality. You can't have it power. You can't have it ruler of the darkness of this world. You don't rule me. I'm a child of the light. I'm born of the light. I wear the armor of life. I walk in the light as he is in the light The entrance of his Word brings light. Get out of here spirit of darkness. Get out of here spirit of death. How dare you to even attempt to touch this. To touch this temple of the living God".

So Kenneth Copeland publications, put it back into print. You can get it from us. It is a marvelous translation. A number of things that he actually said that. Action, action, corresponding action to faith. If Abraham had not had corresponding action to what he believed, his faith never would have come to fruition. And it's working in here this morning. I said, it's working here. Oh right here. Right here around the bridge of the nose. Right here. Over that cheek... That's a sinus condition. And the pain, just comes down here the side of your nose like that. And sometimes it just excruciating. Well, it's gone. That's what I heard. It's gone. It's gone.

Now, I started telling you this a while ago and I'll continue. You can go ahead and be seated 'cause we're not near done. I'm going right back into where we are now. But this was very important. Now, if you ever watch the 700 club you know that the main part of your health is in the gut. That's the sewer system, that's where all of the junk goes. And the gut flora, if that gut flora is right, it's not all that hard to do. But you have to buy a lot of junk. That stuff, is not worth it. Amen. My gut flora is right where it's supposed to be. If you compare my body in years, my body is somewhere along about 58, 60 years old. And I'm not having the flu. I haven't had the flu. In years. Except in January at the Ministers' Conference. And that back room back there, it's just, everybody's hugging one another. All the preachers hadn't seen one another in an year and we're all hugging one another and all that.

Now, let me tell you what happened the year before. That's January, flu season. Would you like to know why that's the flu season? James, it comes right after Thanksgiving where you pig out. Eat a lot of sugar. That'll kill your immune system And you're still pigging out to Christmas. You don't ever quit. And so January everybody's got flu. Yeah. That's hard to understand. But in some cases it's hard to do anything about it because you've been living like that a long time. But you're a believer. You can take your faith and you could kill that thing so fast.

So year before last, year before this January. I'm sitting there on the front row and I don't remember who was preaching. It is was about two or three days there. And all the symptoms of the flu came on me. I started chilling. And then, kind of hurting behind my eyes. And I smile and I said, you can't put that on me. And you know, you can't put that on me. And the most it hurt, the bigger that my smile got. I said you can't do it. And you know, you can't do it.

Now, get your hand off my body. It lasted nearly 15 minutes. Hallelujah. Thank you lord. Yes. Now this year and I'm looking, it could have been COVID 19. And just all of a sudden Gloria and I had the symptoms and there were one or two that, it really hit hard. I mean really, really hard. That one person had to go to the emergency room. Well, I had this two weeks. That's the best it got. Hallelujah. Glory hallelujah. Fever went down about one or two days. Not had two weeks, two days. That thing stayed two days. You can't stick me with that. Hallelujah.

Now get hold of that, that's vital information. That's healing information. Faith is the substance of things hoped for. And this is the way it works. Once you get that, once you see that and once you hear "Hey this thing will work". Hope comes up on the inside of you. You're no longer scared of that pain. You're no longer frightened that, this thing is gonna cause me to kill myself. No, no, no, no, no, baby. Aha! The healing is here.