Kenneth Copeland - You Are Supposed To Be Healed Today 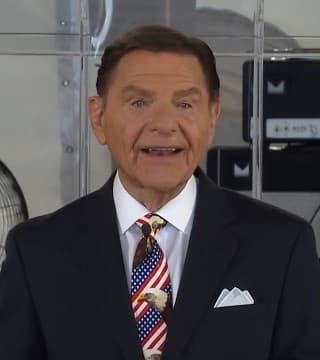 Now then, You're supposed to be healed today. It's crying out, take it. You own it. It is so simple. I'll show you how simple it is. Open your Bibles, to John 3:16. Everybody in the room knows John 3:16. But put your eyes on it. Look in your Bible. "For God, so loved the world that he gave. His only begotten Son, that whosoever believeth in Him, should not perish but have everlasting life". Life. Zoe, life. Oh! If only we could read Greek. Should have life, healing, deliverance from calamity and danger. That's the reason it's translated. Saved. Saved "Sozo"... life Glory to God.

That's the way the religious mind thinks, it's not looking right straight ahead and you read scriptures like that and you get a "Yeah but", "Yeah but, what if". Absolutely the badge of unbelief. Not doubt, unbelief. There's a vast difference between doubt and unbelief. What the Bible calls unbelief is not non-belief. it's believing something. I'm talking about born again people now here, you know the world, but, "Well yeah, Brother Copeland but whatever". Believing something other than the Bible. Believing something other than the will of God. "I just don't know if it's God's will or not for me to be healed".

Well, now wait a minute, let's back up here a second. How long have you been saved young man? Uh! 10 years. Did it ever occur to you that it wasn't God's will to save you? Absolutely not. Neither did it occur to the people that accepted him 40 years ago, 50 years ago, or you say, "Oh yes, Brother Copeland, I just don't know if it's God's will to heal me". Can you see the conflict there? Faith begins where the will of God is known. And that's just a small adjustment when you realize that Jesus the healer, Jesus the savior, Jesus is God's gift to the world. And in a lot of cases, it's easier to get a sinner healed particularly than a Pentecostal Christian that doesn't know the Word because he doesn't know anything. He doesn't have enough sins to fuss with it.

Well, particularly if you've never have spent any time in church, you're not supposed to be sick. You're not... You're not even supposed to die. You will, but you're not supposed to. And I'm gonna tell you something, are you listening? You and I, have done all the dying we're ever going to do. Listen, we've done all of them dying, I died, I died on the second day of November 1962, I died. And like the apostle Paul nevertheless, I live. I was crucified with Christ. My spirit man was circumcised. What does that mean? The Word, the sword of the Spirit. The moment you said, "I mean, I remember that night Gloria had got a little bit before eight o'clock, I'd just flown, I'd just had got a new job, glory to God and God moved us out of that junk we were living in and put us in a brand new furnished apartment. It even had a kitchen stove in it".

You have to ask Jesus to come into your heart. I heard, my Sunday school teacher's voice still in my sprit. Mrs. Taggert. She was old. She called herself Old Lady Taggert and I can just see her, she is a little small woman and she wore a little black straw hat and it just sat down right on top of her head and she called herself, Old Lady Taggert. And she taught the boys' Sunday school class. And the Southern Baptist Church, they ran it like school and every year, you went to another grade in Sunday school. Well, we just let them know, "Without Mrs. Taggert, we're not coming back".

So Mrs. Taggert graduated with us. And I heard voice, boys, "You have to ask Jesus to come into your heart". I did and He did. Now that moment, I became a new creature. I didn't know it, I never heard that, but I knew I was saved, I heard that in the Baptist Church. I knew I'm saved now, brother, yeah. And I called around to Gloria. I said, "Gloria, come here". She came around and walk over to me. She had gotten saved two weeks before, sitting on a rented roll away bed, with nothing. I didn't know it. I'm out hunting a job. I'm the one that screwed all this up. And you've heard her pray it.

She picked up a Bible that my mother had sent me a little paperback and she wrote a message to me about, "Seek first the kingdom of God and all these things will be added to you". Gloria said, "Well, I sure do need things". She didn't know how to pray, she is said, "Lord, take my life and do something with it". She didn't know the terminology, but it sure worked. Amen. I said, "Gloria, what if I"... I'm stumbling around her, I didn't know how to say this to her. We had already decided, since her folks were Church of Christ and my folks were Baptists, neither shall the two meet, we just weren't gonna say anything about it.

I said, "Gloria, what if I... Well, I don't know, maybe I could... Maybe go somewhere and give them a testimony for God". She said she thought, "What Testimony"? But that's not what she did. She said, "Hallelujah"! I said, "What"? She'd been saved two whole weeks. You know what happened? My mother, threw her Bible down on the kitchen table and said "I've prayed the last prayer am gonna pray over him, if he goes to hell, it's your fault". She got saved in two weeks and I got saved in three. Guess who I called first? Mama.

Now then, I said all that to say this, God s0 loved that He gave. He gave the most precious thing that He had. He so loved that He gave. Isaiah 53. We're getting close to closing. Verse four, "Surely he hath borne our griefs, carried our sorrows". The literal translation of that, "Surely. He has borne our sicknesses and carried our pain. We did esteem him stricken, smitten of God and afflicted. But he was wounded for our transgressions, he was bruised for our iniquities. The chastisement of our peace was upon him and with his stripes we are healed".

Now, every morning, I purposely at the Lord's instruction, develop this as a daily routine, everyday, the very first thing I do, I walk in the bathroom, look myself in the eye, "Surely, Jesus bore my sickness and carried my pains. They did esteem him stricken, smitten of God and afflicted, but he was wounded," I'm looking at myself in the eye and I quote that whole thing. And then I go to Matthew, 8:17. "He took our infirmities and bore our sicknesses". Or I say it like this, "He took Gloria and my infirmities and bore our sins".

First, Peter 2:24. "He bore our sin," I'm looking at myself in the face. He bore our sins in his own body on the tree that we being dead to sin should live under righteousness and by his stripes Gloria and I are healed, well restored and strong. Everyday, start your day like that. My, my, my! Do something that will remind you of it, everyday. Be it done unto you accordingly, do your faith. The way you believe, it's yours. How? Just like that.