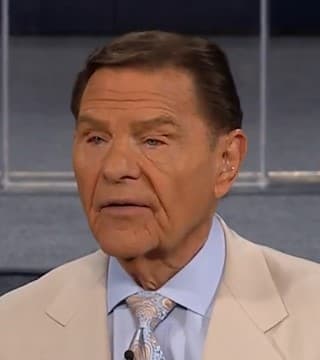 Now, turn with me to Matthew 22. Matthew 22:41. There is a word, a covenant, especially, it is especially tied to the blood relationship, is one of the most difficult words to bring into the English language and if you don't know what it is, you don't see it in the first covenant and it is so poorly translated, the English language is like that. Anyway, let's get to "Chesed". Matthew, 22:41, are you there? "While the Pharisees were gathered together, Jesus asked them saying, 'What think ye of Christ? Whose son is he?' They say unto Him, 'The son of David'". That's huge.

Now, what is "Chesed"? 2nd Chronicles 20. "It came to pass after this also, the children of Moab, the children of Ammon and so forth, came against Jehoshaphat to battle". Now, I won't go through all of this because you know the story and you can take time to read through it. You come over, the Spirit of God came on a young man in that congregation and gave them exact details of this battle. Gave them the location, gave them where they would be and how it would be and the battle is God's and the victory is yours.

Now, verse 20. "They rose early in the morning and went forth into the wilderness of Tekoa. And as they went forth, Jehoshaphat's stood and said, 'Hear me O Judah, you inhabitants of Jerusalem, believe in the Lord your God, so shall you be established, believe His prophets and you shall prosper.'" I skimmed across the surface of that for a long, long time and I thought God told him to put singers up front. He did not. Look at it carefully. "When he had consulted with the people, he appointed singers unto the Lord and that should praise the beauty of His holiness". Now get it, "they went before the army to say, 'Praise the Lord for His "Chesed" endures forever.'"

And when they began to sing and praise, the Lord moved. They claimed covenant, "Chesed". Favor, honor and covenant. Honor your Word. This is the moment. Us little ones need favor from the big one. In whom we have covenant. I'll give you a good illustration of "Chesed". A big mother elephant, and she got a little baby elephant, that's me. Over there behind her mama. And you start getting a little bit too close. And her ears go out like this, that means back off Jack. Big mama is on the move and you better keep your hands off my baby. That's "Chesed". Or David and Jonathan entered into an actual blood covenant.

Now, hey, don't you be messing around with this, we already have a blood covenant, don't be mixing blood with somebody. You get into more hell than you know what to do with. Saul was killed, Jonathan was killed. David said, "Is there no one left of the house of Jonathan to whom I can show 'Chesed'"? That desire to give and to supply and to take care, that driving, that "Chesed" desire, I have to do this, I have to do this. They said, "There's one little guy, he's crippled, but he's down at a Lo-debar, the dry place". David said, "Get him". And they brought him in there and he thought, he'd been lied to all of his life about David. He thought David just found one more and gonna kill him. No, listen to what he said, this is what the king said about the little guy.

Now, David is a direct type of Jesus. Would you agree with that? Amen! Glory to God, and he said, listen to me, he said, "This young man will sit at my table, eat my food out of my plate, and he'll never hit a lick for the rest of his life, I'm gonna take care of him". That's "Chesed". And when you become so dynamically aware of it and it's there all the time. I don't get in my car, certainly don't fly the airplane without invoking the Name. Every flight, not just the first flight of the day. Whether I'm flying or whether I'm on the back seat, we put our hands on the side of that airplane, Father, we plead the blood over this airplane, in the name of the Lord, Jesus Christ, for protection against every evil spirit, every evil person, every wicked evil plan of the devil is bound and stopped and thwarted. These are covenant words.

Let's go to New Testament. My, my, my, my, my! Oh dear Lord. We're gonna answer some questions here. Look at Matthew 15:22. Now you can see why Jesus did what he did and why the Syrophoenician woman did what she did and said what she said. Matthew 15. Thank you. Verse 22. "Behold a woman of Canaan came out of the same coast". This is before Jesus goes to the cross. This is before He's raised from the dead. She does not have a covenant with God. She has no covenant. And Jesus has already said, "You go first to the house of Israel".

Well, He said to Himself, that's who I am. Spirit of the Lord is upon me because he has anointed me. What does the word Christ, I wish they had translated that word. To Christen. To anoint. Christ. Messiah means the same thing. It's had a very lofty meaning put to, of course it is, He is thee Christ. He is thee anointed one. Amen! He is the anointed one of God, the Messiah. Yeshua Hamashiach The Messiah, the Anointed One, the one that's the carrier. Hallelujah! Oh, glory to God, amen! And she got some action. He answered and then verse 25, "she came and worshiping Him said, 'Lord, help me.'" She called Him Lord. She worshiped him. Help me. "Help me. But he answered and said, 'It's not right to take the children's bread and cast it to the dogs.'"

And she said, now she's not the least bit touchy. No, no, she's dealt with all of that. She knew she didn't belong in there, but she knew who He was. And she called for "Chesed". No way he can turn away from that. And she said, "Well, that's true, Lord". Yet us little dogs eat of the crumbs which fall from their master's table. And Jesus answered and said unto her, "Oh woman, great is your faith. Be it under thee even as you will". And her daughter was made whole from that very hour. Why? She called for "Chesed", and there's no way he could walk away from it. He's bound to it because of the "Chesed" of His Father.

But God so loved the world that He gave, Jesus demonstrated that. Hallelujah! Bartimaeus used to be blind Bartimaeus, he's just Bartimaeus now. Praise the Lord. 10:46. "They came to Jericho, and as he went out of Jericho with his disciples and a great number of people, blind Bartimaeus, son of Timaeus, sat by the highway side begging. When he heard that it was Jesus of Nazareth, he began to cry out and say, 'Jesus thou son of David, have "Chesed" on me.' And many charged him they said, 'Just shut up, man, just be quiet.'" They didn't even know what he's saying.

Now, this is still in the old covenant, even though it's in the New Testament. Because the new one didn't take place until after Jesus was raised from the dead. 'Cause His blood ratified the new one. Fulfilled the old one or the first one. They charged him that he should hold his peace, but he got louder, he cried, "Messiah, Messiah, have 'Chesed' on me". And Jesus stood still. The magic words were spoken, Messiah, "Chesed", and Jesus stopped in his tracks and said, "Bring the boy to me". He can't ignore that. He cannot ignore it today. He cannot ignore it today. It cannot be ignored when you know what that means, and you know you're a carrier of it. And you know when you're ministering to the sick, glory to God, hallelujah! That the favor. When people say I'm blessed and highly favored, now you know what you're saying.

Now you know what you're saying. No, I'm gonna do more than that one, I've gotta do another one here. Job 10. Here's a man that absolutely would not surrender. It took some time for me to really understand this book. You read things through there that you think, man! And God said that he didn't do wrong, and I see things all over the place that he did wrong. But wait a minute, there was only one sin involved. Satan only said to God, this is the only thing the devil said to Him, "He will curse you to your face". And he refused to do it. He absolutely refused to do it. "No," he said, "I'd die before I do that. No way I'm gonna do that". And I kept thinking, yeah, but the devil came in and killed all of his children. Now wait a minute. He said, well, the Bible said that he kept making the same sacrifice continually. Now Job's a man of faith. But not here, he was making sacrifice in fear. Instead of making that sacrifice.

You keep the words of the covenant and the blessing happens. Then you come into the new covenant, glory to God. The second covenant, the living covenant, the everlasting covenant, glory to God! And the curse of the covenant has been destroyed. Hallelujah. "Thou hast granted me life and 'Chesed'". The Book of Job, 10:12, you see it? You have granted may life and "Chesed" with your visitation. What did he get? His wife committed that sin. Why don't you curse God and die? She's the one that opened the door to the children, not Job. She did it. She did it. She fell for it. Job didn't. He just stayed put.