Kenneth Copeland - Living In The Blessing During Famine 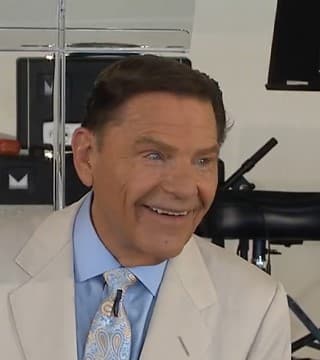 Turn with me to Genesis 37, now, we're talking about the THE BLESSING. 37th chapter of Genesis and look at the 12th verse, "His brethren went to feed their father's flock in Shechem". And Israel said to Joseph, "Do not thy brethren feed the flock in Shechem? Come, and I will send thee unto them". And he said to him, "Here I am, I'll go". And he said, "Go, I pray thee, see whether it be well with your brethren, and well with the flocks; and bring me word again". So he sent him out of the Vale of Hebron, and he came to Shechem.

Now, watch THE BLESSING work. "And a certain man", that means that this was a certain man, "found him". He just happened to find him. "And he was wandering in the field", now, he's lost. "And the man asked him saying, What seekest thou? And he said, I seek my brethren: tell me, I pray thee, where they feed their flocks. And the man said, they left here; I heard them say, Let's go to Dothan. And Joseph went after his brethren, and found them in Dothan". Come on, there just happened to be a guy there that heard them saying where they were going.

Now, if you think that's coincidence, there's something wrong with your thinker. Because we'll find out that Joseph was a blessed and prosperous man. THE BLESSING of the Lord was not only with him, it was on him and in him. THE BLESSING, say it, "THE BLESSING of the Lord". Now, we'll go from there. And we go down 24th verse, "they took him and cast him into a pit. The pit was empty. There was no water in it", or a cistern, is what it was, "They sat down to eat bread and they lifted up their eyes. They lifted up their eyes and looked, and behold, look. There just happened to be a company of Ishmeelites that came from Gilead with their camels, bearing spicery and balm and myrrh going to carry it down to Egypt", and that's where he needed to be. That's where the destiny of God planned him to be. He had to be there, he had to be there.

"So they lifted up Joseph and sold him to the Ishmeelites and they brought Joseph into Egypt". From there we'll go to the 39th Chapter. "Joseph was brought down to Egypt and Potiphar, an officer", this is a field grade officer, he is a general. "An Officer of Pharaoh, captain of the guard. An Egyptian bought him out of the hands of Ishmeelites, which had brought him down there. And the Lord", L-O-R-D, The Lord God. "The Lord was with Joseph. And he was a prosperous man. He was in the house of his master the Egyptian and his master saw it". People should be able to see THE BLESSING of the Lord on you and on me.

Now, then, I want you to see some more about this, this man. "His master saw that the Lord was with him, and the Lord made all that he did to prosper in his hand. Joseph found grace in his sight and served him and he made him overseer over his house, all that he had he put into his hand and it came to pass from that time he made him overseer in his house over all that he had, that the Lord blessed the Egyptians house for Joseph's sake, and THE BLESSING of the Lord was upon all he had in the house and in the field". Turn with me to the book of Isaiah 43:25. "I, even I am He that blotteth out thy transgressions for my own sake". Not your and my sake, His sake. "And will not remember your sins. Put me in remembrance, let us plead together, declare you that you may be justified". He did that for His sake. He did that for His sake. Tracy, if He remembers our sins, He can't bless you. And He's the BLESSER. I mean that's what the two books are about.

Now, then what happened to Joseph? Well, the two guys, the butler and the baker came in there and he told both of them exactly what happened. What's gonna happen, one of them is gonna get his head taken off. Oh my goodness, Brother Copeland, why would God tell that man that? So he could prepare for it? So he could prepare for it. Amen, I mean, that's the goodness and sweetness of God. God told him beforehand so he could pray so he could prepare for it, amen. And then he told the other guy, well, you know, you're gonna make it. And be sure and mention me, you know, to the king. Two more years went by. That guy forgot, no, he didn't. No he did not forget, THE BLESSING held it back. Because when he prophesied that to him, he was 28 years old. And he had to be 30 according to the Word of God, to step into that place of authority, Jesus had to be 30, the Levitical age of the priests.

That's when you take Holy Spirit responsibility, amen. Jesus was 30. He's just as much the Son of God when he's 29, but he did no miracles until he turned 30. And until he was baptized in the Holy Spirit. The Spirit of God was always in him. The fruit the Spirit was always in there. But he had to have the anointing. He had to have, it was prophesied in the 10th and 11th chapters of the book of Isaiah, the burden-removing yoke-destroying power, that anointing. And he said, "The Spirit of the Lord is upon me for He has anointed me". He has anointed me.

So THE BLESSING saw to it that he didn't get into office until he turned 30, 13 years from slave boy or actually from that first dream which talking about the same thing, to prime minister of the most powerful nation on the face of the earth at that time. That's a good place to shout, Amen. Hallelujah! Come on, praise God. Can you see that? It is THE BLESSING of the Lord. It maketh rich, it maketh rich. It makes, It heals. Joseph was a forgiving man. THE BLESSING does not work in an unforgiving heart because it takes faith to activate it. And THE BLESSING, Himself said that in the 11th chapter of the book of Mark.

"Whatsoever thing you desire, when you pray, believe that you receive them, and you shall have them and when you stand praying forgive, if you have ought against any, that your heavenly Father may forgive you your trespasses". Now the next verse says, "If you do not forgive, neither will your heavenly Father forgive you". When you go back to older manuscripts that's not in there. That came later. Of course, it's true, but it puts the wrong light on God, saying that He won't. No, he can't. It isn't that He won't. Because that's his biggest desire is to forgive you and keep THE BLESSING going. It isn't that He won't, He can't. You refuse to forgive, you tie His hands until you repent. I said until you repent.

Now you come with this BLESSING all the way into the ministry of Jesus. The common teaching of the day was the curse. Jesus began to preach "the Spirit of the Lord is upon me for He has anointed me to preach, teach and heal". Hallelujah! And He went everywhere, teaching THE BLESSING, teaching that BLESSING and not the curse. So easy to receive from Him. And He hasn't changed. It is easy today. The healing BLESSING is in this tent right now. It's on top of this tent. It's all the way around this tent, why? Because He's everywhere present. THE BLESSING is alive. And He sent His Spirit.

Look with me in the Gospel of Luke. The very last chapter, the 24th chapter. Verse 36, "as they thus spake Jesus Himself stood in the midst of them, and said unto them, peace be unto you. They were terrified and afraid, and suppose that they'd seen a spirit. And he said unto them, why are you troubled? Why do thoughts arise in your hearts? Look at my hands, and my feet, that is I myself, handle me and see, for a spirit have not flesh and bones as you see me have. And when he had thus spoken, he showed them his hands and his feet, and while they yet believe not for joy and wonder, He said unto them, have you here any meat? They gave Him a piece of broiled fish and of a honeycomb, and He took it in did eat before them. And He said unto them, these are the words which I spake unto you while I was yet with you that all things must be fulfilled which were written in the law of Moses and in the prophets and in the Psalms concerning me. Then opened He their understanding that they might understand the scriptures and said thus it is written, Thus it behooves Christ to suffer and to rise from the dead the third day, and that repentance and remission of sins should be preached in his name among all nations beginning at Jerusalem. You're a witness of these things, and behold, I send the promise of my father upon you, but tarry you in the city of Jerusalem until you be endued with power from on high. He led them out as far as Bethany, he lifted up his hands and he blessed them".

The last thing, he blessed them. I said he blessed them. He blessed them. "And it came to pass, while, he blessed them He was parted from them and THE BLESSING carried him up in heaven". And out in the desert place in the book of Mark, where they had gone to rest but so many people from thronged to him, and he saw them, as sheep without a shepherd The Shepherd, the Great Shepherd and the Great Physician. And he taught them many things. Many things, say many things. His disciples were so tired and so worn out that's reason he took them out that they hadn't even had time to eat. They worked so hard. And they really weren't paying any attention to what he was teaching them anything.

I mean, they had problems on their hands, and they're afraid. I mean, we're out here in the middle of this desert, This is equal to a famine. This is equal to COVID-19 or anything else you want to say. There's nothing out there. Nothing but Jesus out there, And a little guy with a few fish. So what did He do? The people had faith for this thing, Joe, because he taught them many things about THE BLESSING. The anointing of the Lord I dare say He didn't mention the curse one time. And they hung on every word. They didn't care whether they ate anything or not. One little guy and his little happy meal and he did what? And BLESSED it!

What do you think he said? "Well, bless these little fish and the fisherman that caught them and bless these little biscuits and whoever cooked them". Come on, He needed it to multiply. He needed some multiplying here. Be BLESSED, be fruitful, multiply, and feed and replenish these people. What do you think he said, as he was rising outside? You be BLESSED, you be BLESSED, you multiply, you have dominion, you take it, you have dominion, you have my Name, you have my authority, you're the BLESSED people of heaven. Hallelujah! Oh, glory to God! Thank you, Jesus. A BLESSED people. We're a BLESSED people.