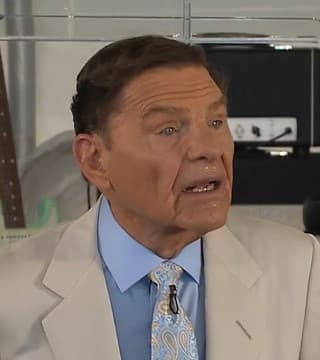 Praise God. Father, we give you praise and honor this morning, and we dedicate this very atmosphere that we breathe to the powerful and wonderful Name of the Lord Jesus Christ of Nazareth. And we're already expecting many things. Mighty works of God, mighty miracles of God, mighty outpouring of the Spirit of the living God and we give you all the praise and the thanksgiving for it in the Name of Jesus. Now, I'm gonna say something to you this morning. THE BLESSING of the Lord.

Now, here again, what's the definition of wealthy. What's the definition of rich? More than enough, Because when God entered covenant in the 17th chapter of Genesis, the first verse, with Abram and changed his name to Abraham. He said, "I am the almighty God". He actually said, "I am El Shaddai. I am the God that's more than enough". The Hebrew word of Shaddai refers to the nurse, the mother that's everything. to that child. Everything. She gives life to that baby. She is everything to it. She is that baby's food. Clyde, we just stand around and watch, but that's all we can do and do a lot of praying and do a lot of loving, brother. Amen. That's about it. She's everything to that baby. She can understand it long time before you can.

You've heard me say this before, but I mean, and I say, "Gloria, what's she saying"? Tell me what Kellie said. Didn't sound like anything to me. It sound like tongues to me, but hey, that's the way your Heavenly Father is when you speak in tongues. You're His baby. And He can understand every word you say and the devil doesn't have a clue. Thank God for speaking in tongues. Thank God for praying in tongues. Oh man. Glory be to Jesus. Thank you Lord. particularly when you just run out of things to say. Thank you, Lord Jesus. Are we gaining ground here? We're getting somewhere with this, glory to God. Thank you, Lord Jesus.

Now then, you just track it. Joseph was 13 years old when he had the first dream. 13. Turn with me to Genesis 37. Now, we're talking about THE BLESSING. 37th chapter of Genesis and look at the 12th verse, "his brethren went to feed their father's flock in Shechem and Israel said to Joseph, 'Do not thy brethren feed the flock in Shechem? come and I will send thee unto them'. And he said to him, 'Here I am, I'll go'. And he said, 'Go, I pray thee, see whether it be well with your brethren and well with the flocks. Bring me word again'. So he sent him out of the vale of Hebron, and he came to Shechem". Now watch THE BLESSING work. "And a certain man". That means that this was certain man. "Found him". He just happened to find him. "And he was wondering in the field".

Now, he's lost "and the man asked him saying, 'What seeketh thou?' And he said, 'I seek my brethren, tell me I pray where they feed their flocks.' And the man said, 'They left here. I heard them say, let's go to Dothan.' And Joseph went after his brethren and found them in Dothan". Come on. There just happened to be a guy there that heard them say where they were going. Now, if you think that's coincidence, there's something wrong with your thinker. Because we will find out that Joseph was a blessed and prosperous man. THE BLESSING of the Lord was not only with him. It was on him and in him. THE BLESSING, say it, THE BLESSING. Of the Lord.

So, now, we'll go from there and we go down 24th verse, "they took him and cast him into a pit". The pit was empty. There was no water in it. Or a cistern, is what it was, "They sat down to eat bread and they lifted up their eyes. They lifted up their eyes and looked, behold". Look, "there just happened to be a company of Ishmeelites that came from Gilead with their camels, bearing spicery and balm and myrrh, going to carry it down to Egypt". Then, that's where he needed to be. That's where the destiny of God planned to him to be, he had to be there. Now, why did he have to have those dreams? Why did he have to be there? He was born into the most important family on the face of the planet and they were dysfunctional. I mean, come on. But they became the 12 tribes of Israel. There had to be a prophet born into that family that could hear from God and walk by faith in THE BLESSING of the Lord.

You can't do it just because you know about it. You have to consciously walk by faith in it. Very important, extremely important. "So they lifted up Joseph and sold him to the Ishmeelites and they brought Joseph into Egypt". From there we'll go to the 39th chapter. "Joseph was brought down to Egypt and Potiphar, an officer", This is a field grade officer. He is a general. "An officer of Pharaoh, captain of the guard. An Egyptian bought him out of the hands of the Ishmeelites, which had brought him down there. And the Lord", "L-O-R-D" "the Lord God". "The Lord was with Joseph and he was a prosperous man. He was in the house of his master, the Egyptian and his master saw it".

People should be able to see THE BLESSING of the Lord on you and on me, amen. Not just the fact that we're well, no, but that we prosper in every situation. We prosper in a mess like we're in today. We're not dependent on our job. I mean they can shut your job completely down. You just keep being blessed. If God has to put money in a tree. Years ago, there's an article came out in the paper or someplace. You understand this is Savelle sitting here in front of me. And, I don't know, Jerry, somebody, there's a cow, brought a bag of money into somebody's yard or something like that. Huh? It was a dog. Well, you know, dog or cat. And Jerry said, "That dog was hunting me". "That dog had a bag of money in his mouth".

All of our debts are paid, we get our land, we get our houses, we get our cars, we get our airplanes, we get whatever we want and whatever we need by THE BLESSING of the Lord, somebody shout amen. You can get blessed in a tent. You can get blessed anywhere. Sometimes you get to thinking about this and you just, I don't know, it just gets on me sometimes and I get to thinking about, and I think, My God, Well, I remember where I came from. I remember what it was like to have zero. And I remember when I first found out about THE BLESSING of Abraham and I was a student, there at Oral Roberts University and I'm listening to Brother Hagin all at the same time. And THE BLESSING of Abraham came on the Gentiles 'cause Jesus redeemed us from the curse of the law.

And I said THE BLESSING of Abraham, and we lived in that little, old house, there that little, old project house, there in Tulsa. And I thought maybe I better look up this BLESSING of Abraham. And I didn't have to look very far. And Abraham became "very rich". I was very interested in "very rich", 'cause the car we were driving was not more than enough. It had 90th plus thousand miles on it when I got it. And I won't go into that story. But anyway, I got to looking at that, and reading that and that got on me. I hollered at Gloria. In fact, she was out in the backyard, hanging out the clothes. I was in the house studying. And I came across that. I hollered at, "Gloria and get in here". She came in and I said, "Sit down girl". And I read that to her. "THE BLESSING of Abraham might come on the Gentiles through Christ Jesus, that we might receive the promise of the Spirit through faith".

And then I went over there and I said, "Listen to this, listen to THE BLESSING of Abraham, listen to this". And I read all of that out of the book of Genesis. My eyes were so big. Her eyes were getting big. I got right down in her face. I said, "Girl, this ain't nothing but a matter of time, we are rich now, it's coming, it's coming. We are rich now". And you have to remember, in 1967 Julie London had a big hit, huge hit. It became Gloria and my theme song. "Our day will come, when we'll have everything". We just sang it all day and night. "Our day is coming. When we will have everything. THE BLESSING of the Lord has made us rich".

Now, let me ask you a question. How did Joseph, here's a little teenage boy that had never done a day's work in his life. This is one of the reasons why his brothers hated him. Because he didn't have to do anything. He came late in his dad's life and he just, I mean, he petted him. He'd never worked. How on earth did he know how to run a major estate, farm, cattle, and manage it so well that the general paid no more attention and didn't even know anymore how much he had. He prospered under Joseph's management so well. Well, how'd he know that? THE BLESSING taught him. The same BLESSING that gave him that dream.

See, it's not a blessing, it's a Person. And his Name is Jesus. And the BLESSED One is living in you and on you right now. And that BLESSING is alive if you will keep it alive by faith, it stays on your mind. Just keep it there all the time. Think about it. Talk about it. Get up in the morning, read these scriptures. Talk among yourselves about it. And what do you do? You remember the little song? "Count your many blessings. Count them one by one. Count your many blessings and see what God has done".

That's the reason He did it. To get that BLESSING of the Garden of Eden back. And there's a track being laid. There's a track being walkedd out. Joseph is on that track. He's walking that out. Potiphar's wife came on to him and then lied about him, got him put in prison. And he did it again. THE BLESSING of the Lord was on him, so, hey, this was a political prison. This is the worst of the worst. They turned the prison over to him. Come on! Cause he knew he was BLESSED and he walked in it on purpose. I'm the BLESSED of the Lord.