Kenneth Copeland - Anointed To Live In The Blessing 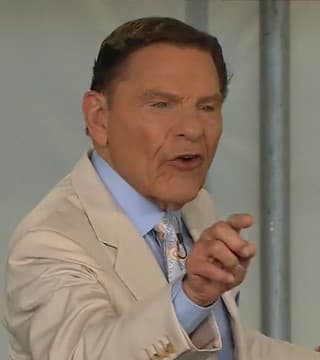 "So He said to him", let's go back here and look at this again. Verse 26, "man be in our image after our likeness, have dominion over the fish of the sea, over the fowl of the air, over the cattle, over all the earth, over every creeping thing that creeps upon the earth. God created man in His own image. In the image of God created He him male and female created He them". Adam didn't hear those words. He was lifeless, until God said, "man, be in our image". He didn't hear that. What was the very first thing the human ear ever heard? "Be blessed"! It's time for amen right there. "Be blessed"! "Be blessed"! God... All blessings come from God. The devil can't bless. He's cursed, amen. Thank you, Lord Jesus. Thank you Father. Now, that is THE BLESSING, not a blessing. That is THE BLESSING.

Now, number of years ago, maybe some of you read our book, "THE BLESSING Of The Lord". When I first saw that, and the Lord said to me very distinctly, He said, "now I want you to renew your mind to this". He said, "I want it to be so real to you that it is not a blessing. It is THE BLESSING. And any time you write in reference to it, anytime you tell somebody in text or letter be blessed in it you use the word bless, blessing, blessed, in any way, write it in capital letters. Write it in your partner letter in capital letters". It is not a blessing. It is THE BLESSING of the Lord. THE BLESSING of the Lord. And one of its literal meanings is the power to prosper and excel. To prosper means to excel, to the highest point possible in anything desired.

Now, desire is the key word there. You could desire to excel in all the dope you can buy. But that's not prospering. That'll kill you, amen. But to excel in revelation of the Word is to prosper spirit, soul, body, financially, socially, family, amen. And that is the result. That's not a blessing. That is the result of THE BLESSING. The BLESSED One, God. Hallelujah. Thank you, Lord Jesus. All right, now then we'll go to 3:17. Now, that BLESSING, released and bestowed in that garden, we know what Adam did with it. And unto Adam, He said, "because you have hearkened unto the voice of your wife and have eaten of the tree of which I commanded thee saying 'thou shall not eat of it,' cursed is the ground for your sake. In sorrow shall you eat of it all the days of your life, in sorrow".

Now, you can look that up. In sorrow, pain, labor, hardship, and toil. Look at Psalm 127. Psalm 127:2, This is one of the songs that I go to sleep on every night. "It is vain for you to rise up early, to sit up late, to eat the bread of sorrows, for so He gives His beloved sleep". Sorrows, toil and hardship. Toil and hardship. Pay attention to the word, toil. Ephesians chapter four, 28 verse. "Let him that stole steal no more. Rather let him labor". Let him labor working with his hands so he'll have money to buy food, so he'll have money to buy baby new shoes. No, that is not what that says. Look at it.

"Let him that stole steal no more, but rather let him labor, working with his hands the thing which is good that he may have to give to him that needs". Not to make a living, but to give. Not to make a living, but to give. Did you hear? He's not toiling. He's working hard. Working hard at the job the Lord has assigned him to, praise God. The scripture says, if you don't work, you don't eat. I hold with that, amen. So let him work, labor with his hands, so he has seed. So he has money. So he has something to tithe. So he has something to give to the one that needs, praise God, hallelujah. I remember when Gloria, I'm telling you, she would go into the grocery store and pray in tongues that we'd have enough money. That she wouldn't have to put anything back on the shelf. Never did have to, glory to God. But see God will move in your behalf.

When I was in the army, 1967, excuse me, 1957, the GI bill wasn't in effect. And I prayed about that. I said, Lord that sure would help. It wouldn't be much, but it sure would help. But you know, it's gone. Guess what He did? Just a few weeks before we went to ORU, the GI bill was reinstated. It wasn't much, but it sure helped buy some, buy some groceries, amen. I didn't know it was THE BLESSING of the Lord. I didn't know THE BLESSING of the Lord existed back then, but it was working all the time. It was working all the time. You have to become BLESSING of the Lord minded all the time. I'm BLESSED. I'm BLESSED. I am not blessed because I'm healed. I'm healed because I'm BLESSED. I'm not blessed because I'm financially well off. I'm financially well off today because I'm BLESSED and I'm aware of it. And I demand it in my life. I don't demand it from God. I already had it from Him. He is the BLESSED and He lives right here on the inside of me.

I'm going there, man. I'm going there, sister. Glory to God, you can go with me, yeah, hallelujah. Come on somebody shout amen. Thank you, Lord Jesus. Thank you, Lord Jesus. Now then go with me to Proverbs 10, verse 15. Excuse me, let's go to verse four. "He becomes poor that deals with a slack hand. But the hand of the diligent maketh rich". Look at verse 15. "The rich man's wealth is his strong city. The rich man's wealth is his fortress. The destruction of the poor is their poverty".

Now, we know this is true just in general. What does rich mean? Abundant supply, more than enough, amen. And that's God's will for every human being on the face of the earth. More than enough. That's what THE BLESSING is all about. It will do more than you and I can do. It is a He. And you have to think about it as both. You have to think about it, It, and you have to think about it, He, amen. He is in you. It is on you. Thank you, Lord. So, a person that doesn't have enough, doesn't have any money. Whether they're born again filled with... I mean lovely people. I'm not talking about bad people, I'm talking about good people, but don't have enough. Particularly those that have been lied to us and have been told by the devil that God doesn't want them to have anything. That's a lie straight from hell. Cause God never changes, amen.

There's a difference, being healed, being well and the attitude of a lot of people Holden, you know this. The attitude of a lot of people is, well, you know I'm well. But you know, you have to be sick sometimes. No, you don't. In both covenants, healing was in both covenants. God didn't intend for you to ever be sick in the old one or the new one.

So now we're down to this point, this is what I wanted you to see. This book from here to here, two blood covenants. The first one in the blood of animals. Then in the blood of man when Abram was circumcised and in covenant with God, he became Abraham. That "H" in the middle of Abraham is HaShem, HaShem. God, the BLESSED one. The BLESSER. BLESSED be Abraham of the most high God, possessor of heaven and earth. BLESSED it is the loss of THE BLESSING in Genesis, right there on the first two chapters. And then the regaining of THE BLESSING of the Lord.

First time when the flood wiped out everybody but eight people. That's the definition of a few. If you wanna know what a few is, it's eight. That's what the Bible said, a few people, eight. So, but God made a covenant, not only with Noah and his family, but also with the animals. And he set the rainbow as the mark of the covenant with Noah and all mankind. And He said exactly the same words again. Be BLESSED, be fruitful, multiply, have dominion and replenish the earth. So, all of us today, all of us today are the product of THE BLESSING of the Lord, spoken to Noah. He got it back. He got it back. THE BLESSING. That's just what it's all about. THE BLESSING of the Lord.