Kenneth Copeland - Jesus Is the Healer Yesterday, Today and Forever 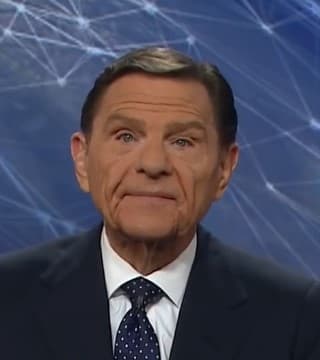 Now Jesus is the same yesterday, today, and forever. Let's spend the day with Jesus. Go to the fifth chapter of the book of Mark. Mark 5. "And they came over unto the other side of the sea", talking about the Galilee. "Into the country of the Gadarenes. And when he was coming out of the ship", or out of the boat, "Immediately there met him, out of the tombs, a man with an unclean spirit". One spirit possessed him. "Who had his dwelling among the tombs. No man could bind him, no, not with chains. Because that he had been often bound with fetters". Now don't get the idea this was a big man. No, no. He's a cutter, he bleeds. He is so weak. He lives out there naked in the tomb, but that devil. That devil would manifest himself and destroy those chains.

"Because he had been often bound with fetters and chains. The chains had been plucked asunder by him and the fetters broken in pieces. And neither could any man tame him. Always, night and day". He never slept. These devils wouldn't let him sleep. "Night and day, he was in the mountains and in the tombs crying and cutting him..". Oh, anybody in the sound of my voice today? That is a cutter. You cut and mutilate yourself. No, no, no. You'll be delivered today. Glory to God and those scars will be removed, hallelujah. You don't have to be scarred like that. Praise God. I bind you cutting spirit. I bind you. Take your hands off of God's property. Right now, you do it immediately. Now, you say glory to God, I'm free.

I really... We really would like to hear from you today. Wherever in the world you are. God bless you, sweetheart, you're free. You're free today. Anyone bound in drugs and... You're free today. Alcohol. Bound with the spirit of pornography, you're afraid today. I announce your freedom today by the blood and by the Name of the Lord, Jesus Christ. Hallelujah. Thank you, Lord. Now, listen to this. "When he saw Jesus a far off, he ran and he worshiped him. But when he ran and worshiped him and cried with a loud voice and said".

Now, this devil is in command of three to 6,000 low-level devils. Under his command. This one ruler has him possessed and these devils are going and coming in and out of him, surrounding him, moving all over that area, striking fear in the hearts of the whole area. They thought this man is some kind of supernatural god or something. He never sleeps and he screams and hollers all night long. And we pull... We can't bind him and we can't tame him. What is this? "He besought him much that he would not send them out of the country". That's an insight. They liked it there.

Now, the people that were there heard what Jesus said. They heard what the madman said, actually that demon. They heard that. "Now, there was there nigh under the mountains, a great herd of swine feeding. And all the devils besought him". Now, the people didn't hear this, Jesus heard this. "All the devils besought him saying, 'Send us into the swine that we may enter into them'". Now, there were 2000 or more of them. What are they doing with so many... With so many pigs out there? These were food for the Roman soldiers, the occupiers, occupying force of that area. That's why all of those pigs were out there and people are grazing them and so forth. Interesting story.

All the devils in verse 12. "Besought him saying, 'Send us into the swine that we may enter into them'. And forthwith Jesus gave them leave. And the unclean spirits went out and entered into the swine, and the herd ran violently down a steep place into the water, into the sea, into the Lake". And they were, there were about 2000 and they drowned. They were choked in the sea. 2000 of them. It would have been a frightening thing. They were already afraid of this madman, and now, all those hogs went wild. And they don't know why they went wild. They didn't know Jesus did something. What is a matter with him? What is he doing here? Well, get out of here, please. He gave him leave. The unclean spirits went out and entered into those hogs.

With one word, "Come out of the man you unclean spirit". In his right mind. Had to be healed in his body. All those cutting marks are gone and called him to preach. And he returned to the Decapolis, which is an area of 10 cities and told how great things Jesus had done for him, and all men did marvel. That's just the morning. "And when Jesus was passed over again, by ship onto the other side", he just went across the Lake. This is just a day in the life of Jesus. "Much people gathered unto him".

Now, on the other side of that lake is Capernaum and that's his home. And don't you know they had look out for him and every time he comes home, "Oh, we're going to get everything we can get from him". "Much people gathered unto him". And he was right there on... The boat just pulled up. "And behold, look. Here comes one of the rulers of the synagogue, Jairus", by name. "And when he saw him, he fell at his feet and besought him greatly saying, 'My little daughter lives at the point of death. I pray thee, come and lay their hands on her. That she may be healed and she shall live'".

Now, he's the same yesterday, today and forever. And today, so many of you are going to get your healing just like that. Already have. Thank you, Jesus. The lower bowels, low stomach, in this area right in here. A lot of pain in there. In the Name of Jesus, take your hands off that Satan. Get out right now, you leave. Get out right now in the Name of Jesus. Glory to God. Jesus went with him. I mean, he just come from the other side over there. I don't know how long that took that he dealt with all of that. Not all that terribly long. He got in a boat, came across the sea, just landed. He's just going home.

You know, and after a strong warning, he's just going home and there's Jairus. And just fell on his face right there in the edge of the water. "My little daughter lieth at the point of death. I pray thee, come lay your hands on her that she may be healed and she shall live. And Jesus went with him. And much people followed him and thronged with him". Thronged him, thronged around him. Praise God. Jesus went with him. Didn't say anything. But his faith took hold of Jesus, and he just followed him home. "And a certain woman, which had an issue of blood for 12 years and had suffered many things of many physicians", 12 years. "And had spent all that she had and was nothing better, but rather grew worse. When she had heard of Jesus, came in the press behind and touched his garment".

Now, it's very, very similar to a leper. It's just not as filthy and deadly as that leper. No. It's a plague, Jesus said it was. So, she's been a shut-in for 12 years. She's been quarantined. She can't get outside. Oh my, Oh my, my, my. Oh dear Lord Jesus, thank you. But, she spent... Had suffered many things of many physicians, spent all that she had and was nothing better, but rather grew worse. "When she had heard of Jesus, came in the press behind and touched that prayer shawl". Just the hem of it. "For she said, 'If I may touch but his clothes, I shall be whole'". And straightway, immediately, just like that.

Glory to God. "And his disciples said unto him, 'You see the multitude thronging you and you say, who touched me?' And he looked round about to see her that had done this thing, but the woman fearing and trembling", she fully intended to crawl out there very quietly, touch that garment, receive her healing, and go back inside until she was better. Because there's, Jairus, leader of the synagogue, and there's Jesus. They know what it says in Leviticus. She was frightened of that. What did she hear? She heard of Jesus. I didn't tell you what you heard. Somebody is relaying the message to her. 'Cause he's preaching it everywhere he goes, She's heard about the healings, but he's preached this everywhere he goes.

He starts with the same text, 61st chapter of the book of Isaiah. "The Spirit of the Lord is upon me for He's anointed me to preach the gospel to the poor. He sent me to heal the brokenhearted. He sent me to preach deliverance to the captives, recovery of sight to the blind, to set at liberty them that are bruised and to preach the acceptable year of the Lord". And he preached that all the time and she's heard it, and people are sending her messages, glory to God. And she said, "Hey, I know. If I can... I'm bleeding now, but, how I've wasted away and I'm so weak. I know if I can just... If I can just drag myself out there in that crowd, there's so many people out there. If I can just touch that garment, I know I'll be made whole, and I know it. I know it in my heart, I know it, I believe it. I say it and I believe it. I'll receive that, glory to God. I'll receive that. I know it. I know, I know it. I know it'll happen".

So, she acted. She said it, but then with corresponding action, she moved into the street. What would have been the alternative? "I know, Jerry, I know", she'd say. "If I can just touch the hem of his garment, I know I'll be made whole, I know that. But I'm so weak. I've been bleeding for 12 years. I just can't do it. I can't do it". She would have bled to death in that little room. Thank you, Jesus. Now then, I want you to see this. Let's continue to read, excuse me. "The woman fearing and trembling, knowing what was done in her, came and fell down before him and told him all the truth".

She testified to that healing. And this is something you need to do. As you receive your healing today, believe it in your heart. Say it with your mouth. Glory to God. And act on it, corresponding action, As James said, "Faith without action is dead". But hey, the fourth step is, testify to it. "Jesus then said to her, 'Daughter, your faith has made you whole. Go in peace and be whole'", W-H-O-L-E, "'be whole of that plague".