Kenneth Copeland - The Love Covenant Will Fight For You 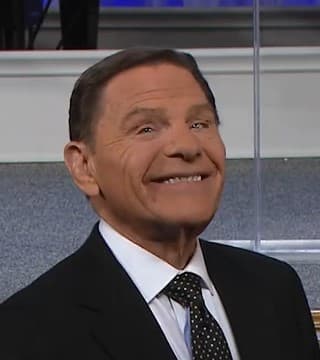 Open your Bibles with me to the book of Matthew please, chapter 22. Matthew chapter 22 and verses 41 and 42. I'm going to wait till you get there. You will understand something right now about the Bible and about a particular set of circumstances and words that you have never understood in your life. If you have already understood this, you are very, very rare believer. But before we get through tonight, I hope you're in a big room so you don't tear it all to pieces. Hallelujah. Yes. Glory to God.

Now look at this very, very carefully. Matthew 22:41, while the Pharisees were gathered together, Jesus asked them saying, what think ye of Christ? Whose son is he they say unto him, the son of David. Write that down. Underline it. Make little arrows, marks. That's one of the biggest verses in the Bible. You'll see it in just a moment. I'm talking about the word Chesed. Now you will see it with a C in front of it Chesed, but that's fine. Just, just, just, just pronounce it "hesed". H-E-S-E-D, that's fine. What is it? The 23rd Psalm?

Let me say this to you even before we turn over there, without having covenant knowledge and with having covenant knowledge. This is one of the most difficult words to express. I have tried again and again and again. Well, I got it. The Lord showed it to me and showed me how to do it. Psalm 23, you do know we're living in the 23rd Psalm? Thank you Lord Jesus. Because he is our shepherd. Psalm 23 excuse me. The Lord is my shepherd. I shall not want. He maketh me to lie down in green pastures. He leadeth me beside the still waters. He restores my soul. He leads me in the paths of righteousness for his name sake, and yea though I walk through the Valley of the shadow of death.

That's not a camp ground, that's not a camp ground. The big word is through. Though I walk through the Valley of the shadow of Covid-19 Glory to God. I fear no evil. You notice it wasn't the Valley of death, it's Valley of the shadow of death. I fear no evil for you are with me. Your rod and your staff they comfort me. You prepare a table before me in the presence of mine enemies. You anoint my head with oil, my cup runneth over. Surely goodness and Chesed shall follow me all the days of my life. Surely, say surley, say mercy. Mercy, mercy, mercy, chesed.

Oh, we're just getting started, right? We're talking about God's, Jesus' grace and Chesed. I had a man told me one time, I'm just, I'm studying, trying to figure out what this is. He said, let me tell you. He said, it's hard thing to tell, but he said, I've spent a lot of time in Africa. Well, in fact I mentioned this morning where the place where they, they cut covenant touch finger, same man, British missionary. He said, when God made covenant with Abraham, God, the almighty God and this little man, he said, it's like a big mother elephant, and she got this little baby. Now and now this is me, a big mama is God, and that's me.

Now, I've got a covenant word. She doesn't promise to take care of me. And he said, you start getting too close in her ears do like that. You better get out of there, Chesed is about to take place. She gonna stomp you. That's what our God does to our enemies. And more the more we learn about this covenant of God, you get bigger on the inside than you are on the outside, because the giant is living right in here. The almighty God himself. Jesus said, I can do nothing without him. He said, it's the father that dwelleth within me. He does the works. Oh, son, come on. Ah, Sergio. Hallelujah.

Second Chronicles 20, now we have to read this very carefully. This is a revealing chapter. It shows an uncommon unreasonable, just some kind of just can't even calculate this kind of a miracle. It really didn't even make any sense, but it sure makes faith. Hallelujah. And we have to take this very, very carefully. It came to pass, second Chronicles 20 verse 1, it came to pass after this also that the children of Moab, the children of Amman and with them other besides the Ammonites, against Jehoshaphat to battle. Then there came some that told Jehoshaphat, saying, there cometh a great multitude against thee from beyond the sea on this side of Syria, and behold, they be in Hazazontamar, which is Engedi.

Second chapter, 23rd verse. Now this is covenant talk, but like I said, you, you, I mean you have to steady covenant. You have to learn those old covenant laws. And this book was, was translated far enough back that, I mean, Sergio, this was back in the 1600's, they had covenant knowledge then, but it got modernized and then it's just simply because they didn't know what they were doing. You have heard the expression, you've heard the word there is a friend that sticks closer than a brother that is a blood covenant friend. That's not "Hi, that's my next door neighbor. He's my friend". No, no, no, no. Blood covenant, families that go and cut the covenant together back there in those times still happens in certain places of the earth. And the first one was when God cut the covenant with Abraham.

Now look at it, here it is. I mean, it's right here. It's right here. Thank you Lord Jesus. Thank you Lord Jesus. And the scripture was fulfilled which saith, Abraham believed God and it was imputed unto him for righteousness, and he was called the friend of God, and now, where "Friend" is capitalized and that it should have been. Sergio, you remember in the covenant supper? He said, I no longer call you servants. I call you friends. This was the covenant man. It was a blood covenant and they didn't know, they didn't know what he was talking about, but he did because his father Abraham cut the covenant with his father God. He's a friend of God, and God we're friend, blood covenant friend.

Now the 10th chapter of John makes sense. Hallelujah. Well, let's go back over there where we were and where was that? Second Chronicles. Alright, here we go. Now, verse seven, are not thou our God who didst drive out the inhabitants of this land before the people Israel and gave it to the seed of Abraham, your friend forever? Oh, that just stands up and just shouts at you. They dwelled there in and have built thee sanctuary there in for thy name saying, when evil cometh upon us as the sword, judgment, pestilence or famine, pestilence, sickness, disease, famine, famine, pestilence, plague. That's what that word means. We stand before this house and in your presence for your name is in this house and cry unto thee in our affliction. Then you will hear and help.

Ha, don't you love it? You will hear it him. Faith is talking. Faith is rising in that congregation too. I'm telling you thousands of them in there and faith is coming. They say, you know what they're saying? Yeah, King. Yeah, he will. He will. He's gonna. He's hearing it. We got this thing, and God answered him. And now behold the children of Ammon and Moab and Mount Seir, whom thou which not let Israel invade when they came out of the land of Egypt for they turn from them and destroyed them not. Behold, I say how they reward us to come to cast us out of your procession, which you gave to us to inherit.

Oh our God, will you not judge them? For we have no might against this great company that come up against us. Neither know we what to do, but our eyes are upon you. You know what to do, and we have covenant with you. Judah stood before the Lord was there, little ones, their wives and children. Then upon Jahaziel a Levite, of a sons of Asaph, came the Spirit of the Lord in the midst of the congregation and he said, Hearken ye all Judah you inhabitants of Jerusalem and you King Jehosaphat thus saith the Lord unto you. Be not afraid nor dismayed by reason of this great multitude for the battle is not yours, but God's. Tomorrow go ye down against them, behold, they come up by the cliff of Ziz. And you'll find them at the end of the Brook or the Valley or the river before the wilderness of Jeruel. You shall not need to fight this battle, but they had to go up. You shall not need to fight this battle. Set yourselves and stand still and see the salvation of the Lord. Oh Judah, Jerusalem, Fear not nor be dismayed. Tomorrow, go out against them for the Lord will be with you. And Jehosaphat bowed his head with his face to the ground, and all Judah and the inhabitants of Jerusalem fell before the Lord worshiping the Lord. And the Leviites, the children of the Kohathiites, the children of the Kohiites stood up to praise the Lord with a loud voice. Hallelujah. And they Rose early in the morning and went forth into the wilderness of Tekoa. And as they went forth, Jehosaphat's stood and said, hear me, O Judah and you inhabitants of Jerusalem, believe in the Lord your God. So shall you be established. Believe his prophets, so shall you prosper.