Kenneth Copeland - Faith And Victory Are Inside You 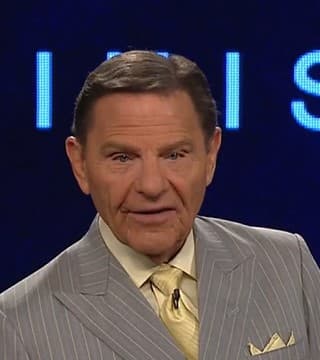 Let's talk a little bit more about this great God. Isaiah chapter 40, the great prophet Isaiah, in his writing said, verse 10: "Behold"! Just the sentence right up before that he said, "Behold your God, look at your God". So we're gonna look at Him. "He shall feed his flock like a shepherd. He shall gather the lambs with His arm and carry them in His bosom and shall gently lead those that are with young". And he asked a question, "Who hath measured the waters in the hollow of his hand and measured out heaven with his span"?

My span is eight and three quarter inches long from the tip of my finger to the tip of my thumb. And I was privileged to be in the study of a rabbi a number of years ago. We had a place for our meeting at night, but we didn't have any place for our meeting in the morning time. And oh I was so blessed that a rabbi so graciously gave to his synagogue over to us to have our morning services and teach faith. And he said, Kenneth, just dig into my stuff in there. Anything you want at all, man. And he showed me things and that's where I found the statement 'light be, light was.' Amen. And then in that same material, it said, and He measured out the heavens with a nine inch span. Well, I couldn't wait to get a ruler and measure mine. See this is all talking about Jesus. Jesus, Amen. Thank you Lord.

So I notice this now. We're looking at the God that's dwelling on the inside of you and dwelling in me. "Who hath measured the waters and the hollow of His hand, measured out heaven with the span, comprehended the dust of the earth in a measure, and weighed the mountains in scales, and the hills in a balance"? Who did that? Your God. One drop of water and weighed the oceans of this planet. One piece of dust. How do you even weigh a piece of dust? You're God, you can do that. And weighed the weight of the mountains. In a balance. He did this before the foundation of the world, before He said light be light was. He already had it all planned, He had it all figured out. He knew exactly what the Pacific ocean would weigh. He knew exactly what the Atlantic ocean would weigh. And He knew exactly when that weight was shifted during the tides going out and the tides coming in and the oceans heaped up like mountains and then went back into the shore. And then He knew man and his ignoramus ideas. You know how men are. One of them wants to dig a hole and the other wants to build a mountain.

So you sell the dirt out of the hole to the guy that wants the mountain. So and then all the wars and you're blowing up stuff and blowing holes in the ground and all of that kind of thing and all that. And this old planet still just moving right where it's supposed to go. A thousand miles an hour, 10,000 miles in one direction. Thousand miles an hour and another at the same time, never has gotten out of balance. Gravity is still working. You never did get up one morning and they had a gravity alert. And the earth kinda got lopsided. Whoa, Oh no! We slung about 800 people off the side of the earth. They just kind of sailed off out into the aether somewhere. No, and God did all of that with a piece of dust and a drop of water. You think He can't handle your car payment? He's already got a plan for you to pay the car off. He already has a plan for you to pay that one off and get a new one. Amen. And never again make one payment. He has the plan already.

People are raised in this world as outside-in people, that everything I need is out here somewhere. The government has it, my family has it, my boss has it and I need it. God has it and I need it. But it's all out here. No, not if you're born again. And especially if you have been baptized with the Holy Spirit, the mighty Spirit of power. 'Cause you not only now have God within you, you have a supernatural way of communicating with Him. That the devil absolutely cannot be a part of. He cannot understand one word you're saying, unless you're speaking by the Spirit directly to him. Which is very outstanding. Amen. Though I speak with the tongue of men and angels and have not love, it's just a lot of noise. But now wait a minute, go ahead and finish up. Amen.

The great 13th chapter and have that love. Though I speak with the tongue of men and angels and have love praise God. I can move mountains, glory to God. I can communicate with the almighty God. I can communicate with angels. I can communicate with God, Hallelujah. Talk about an advantage. No wonder Satan has thought that like he has. Amen. Thank you, Lord Jesus. Oh, glory be to God. That's the same God. The very same one that before the foundation of the world, knew you by your name, same one. Hallelujah. Now then, once we begin to understand this, now you know what Jesus was referring when He said, "The kingdom of God is within you". We are no longer outside-in people, we are inside-out. What? Know ye not that your body is the temple of the Holy Spirit. Come out from among them. Be ye separate saith the Lord; I will walk in you. Think about it.

This whole kingdom, the whole kingdom of God is in here. You tell me something, Jesse, God is in there? He is in there? Take the limits off. I was wondering about the area called Paradise before Jesus went to hell and paid the price. And then all of the first covenant saints were born again, praise God. They watched that combat and they got born again glory to God. Right there and He led them out of there. Emptied out that area called Paradise and moved it to heaven. They never knew the difference. Now they're physically in the heart of the earth, in the upper region of Sheol, upper region of hell, but there was a gulf fixed there. They were not aware of that gulf. It was heaven to them. Heaven at that time was not fit for righteous human beings. It had affected everything up to but not including the throne of God. Even the heavenly utensils of worship had to be cleansed with the blood of Jesus. Then it was fit for us to live there. Only two men. Jesus said no man had gone to heaven.

Now let's put an explanation there. No man had died and gone to heaven. But two men were there in their physical bodies. They haven't died yet. Are you listening to me? Of course, now Elijah and Enoch I was questioning all about that. I said what, how did you do that? I mean, they're in that place of Sheol but it was heaven to them cause it was called Paradise. Amen. They were not born again, but they were the saints of God. They were saved, they just weren't recreated yet. Nobody got that until Jesus was glorified. But now listen and He said, Kenneth, I just repeated to you when I said that to you. He said take the limits off, son. He said quit thinking about the physical confines of the natural planet earth. He said I can put the state of Texas in a clothes closet in the Spirit.

Well, for a few seconds there, I kind of stumbled over that. And then I saw it. He said you could just be walking into your closet and step over in the Spirit. And I could take you to a place and show you the entire state of Texas at one time. And you'd still be in your clothes closet. But you would be spiritually conceiving it. You'd be in the Spirit. John was in the Spirit on the Lord's day and he was seeing something other than the Isle of Patmos. What he saw was far larger than that little island, but he was in the Spirit. Oh glory to God.

Do you know God could have filled you with an angel? After all, what's a demon possessed person? But He didn't. He could have created this special being just for you. He could have created a new special being for every born again Christian throughout the whole planet, billions and billions. Creating a billion creatures is no problem to Him. He's created innumerable numbers. You can't even count the angels He's created, but He didn't. He wouldn't trust you or me to anyone but Himself. No, no, no, no, no, no. I'm gonna do this job Myself. They're mine. They're not my servants, they're my children. I wanna be the life for them. I wanna be everything to them. Hallelujah.