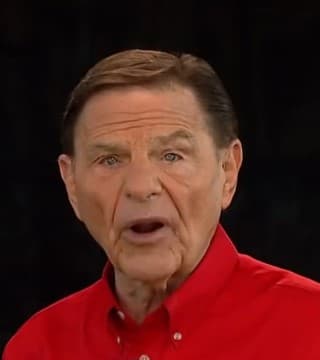 "A certain woman which had an issue of blood 12 years". So, she was unclean, unclean for 12 years. The only thing worse would be to have leprosy. To be unclean, at least the leper could get outside. At least the leper could go among other lepers. She could not. She was holed up in her room. My, my, George, 12 years man. She was quarantined for 12 years. Not three or four months. Nobody, except someone made it there to help her. Because of what it said here, I know someone was there to help her. "She'd suffered many things of many physicians, and had spent all that she had, and was nothing better, but rather grew worse. When she had heard of Jesus".

But then, then she had to get into action. She could have said, I believe this. I believe it with all my heart. I just believed it, and I kept saying it, and I kept saying it, but I'm bleeding now. I'm bleeding now. I'm skin, and bones. I've been bleeding for 12 years. What, no. No, she did it. She just got up, and did it, glory to God. Went right on out there. Then it said, "She received it". Now, notice at five 29. "And straightway or immediately the fountain of her blood was dried up. And then, she felt in her body that she was healed of that plague". She received it. She received it. That means she's did exactly what Jesus said in Mark 11:24.

I venture to say she hadn't been outside in 12 years. That's a long time to be shut in. How do we know? How did we find out that she'd been in this condition 12 years? How do we know that she had suffered at the hand of many physicians? How do we know that she was completely, totally broke, and had no... she evidently was a met woman of means at one time, because many physicians? Spent all that she had on this terrible disease. Because when she fell down before Jesus, she told him all of that. We don't have any concept of how long they were there, but now, just stop and think a moment, who is waiting in the way?

Now, I wanna show you again. Most of you have heard this, but it'll better repeat. The Spirit of God was not in this case. And you can tell it. Jesus had been over across the Galilee, and had just ministered to the madman of Gadara, and delivered him, and called him to preach. And he had just come back across the lake to Capernaum. That's where he lived. That's where his headquarters were. He just went home. And just as the boat, his boat pulled up there, Jairus was waiting for him. I can just see him walking the beach right there. He's gotta come here. He has to come here. He's coming here. I know, I know. Cause this is where he lives. In fact, he lives right here close to me. That's been proven. And fell down, and made his statement of faith. And when they came up, and said, "Your little daughter is dead. Why trouble the master any longer"? He still didn't say anything, George. But Jesus answered, and said, "Stop the fear. Stop the fear".

Now, that's the way Jesus handles death. The spirit of fear is the spirit of death. Fear is not okay. Faith is, fear is not. Stop the fear, believe only, she will live. She will be made whole. Stop the fear. Now, concerning the finances of this nation, and concerning your finances, glory to God. Stop the fear. Stop it. Stop the fear today. Believe only, you will be made whole. Many, many, not a few. Many, many, many people, many people. I'm telling you, a many, many people that live, and walk by faith, and the Word of God is final authority in their lives, will come out of this situation with a better job. The best job they've ever had in all their life. They will come out of it. Their business will prosper. And it will be like this woman with the issue of blood immediately it'll take place, just as soon as they turn us loose, glory to God.

And people, I'm speaking by the Spirit. People will come up to you. People will come up to other people, and say, "How are you doing this man? How'd you recover so fast". You'll say, "Well, I'll tell you how, glory to God Jesus, Christ of Nazareth meets my needs according to his riches, and glory. And if you'd like to know him, I'll introduce you to him right now". Hallelujah. We are the people of faith. We are the people of God's glory. Glory to God. Revelation 12:11, don't turn there. They or we have overcome them. Come him, the devil. All his devil's not whole kingdom of darkness. Well, yeah, I'll turn there. The Lord just said, "That's not good. You need to turn there".

Revelation 12. 11, let's read 10. "I heard a loud voice saying in heaven, now is come salvation, and strength, and the kingdom of our God, and the power of his Christ for the accuser of our brethren is cast down, which accused them before our God day, and night. And they overcame him by the blood of the lamb, and by the Word of their testimony. And they love not their lives under death". In the face of death. Hallelujah.

The words of their testimony. She told it. She testified of it. She declared it, and she kept declaring it. And she declared. She did, don't you know, George? Don't you know, she was thrilled? Glory to God, I'm healed. I can just come out here in front of everybody. I can get out of my house. I can get out of my house, glory to God. I'll get all my weight back. Oh, glory to God. I'm gonna add a little bit here to it. I might even have a baby now cause see, a man couldn't touch her. Doesn't say anything about her being a widow. Doesn't say anything about her being married. Now, glory to God, she can get married. And she can expect to prosper financially again. Glory to God. Thank you, Lord Jesus. Jesus. On the day he went to the cross. Oh, thank you, Lord Jesus, praise you.

I wanna read you something from the book of Isaiah. Very familiar scripture, but not a very familiar verse. Isaiah 53. Talking about the crucifixion of Jesus. "Surely he has borne our griefs, and carried our sorrows". The Hebrew language first actually says, "Surely he has borne our sicknesses, and carried our diseases". The ninth verse, "He made his grave with the wicked, and with the rich in his death". And in my Bible, in the cross-reference Hebrew, deaths, plural deaths. Jesus died. They saw him die physically on that cross. But you remember as well as I do, before he died, he shouted with a loud voice. "My God, my God, why hast thou forsaken me"?

And then, that second death mentioned there is to die spiritually. His physical death was not enough. Spiritual death is very, very simple. It is just simply disconnected from God. Any person who has not received Jesus as their Lord, and Savior, is spiritually dead. Your spirit is disconnected from God. But Jesus took care of that. Went into hell, and suffered for three days, and three nights in that horrible, horrible, horrible hell of a place. And he suffered more than any man before or any man after, because he suffered it all. And he took your place, and he took mine. He took your sins, and he took mine.

1 Peter 2:24: "He bore our sins in his own body on the tree, that we being dead to sin, so to live under righteousness". By whose stripes we were healed. So, our bodies were healed at the same time that he bore our sins. It was all on the same day. All on the same sacrifice. He took our place. He went to hell for us. So we don't have to go. So, anyone in the sound of my voice that has never accepted Jesus Christ as your Lord, and your Savior. He died so you could live. So, you could be free. Glory to God. He bore your sicknesses, and carried your diseases.