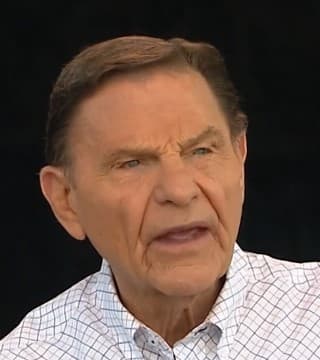 Have faith in the Almighty God. Have faith in the El Shaddai God, the God who's more than enough, the God who is more than capable, the God who knew all about this before it ever came to pass, the God that was already interceding for us, the God that was already helping us before we ever heard of COVID-19. Amen, have faith in God. Thank You, Jesus. Now I want you to turn with me also to the Book of Ephesians, please. In the third chapter. Ephesians Chapter Three, Verse 14. "For this cause", the Apostle Paul said, by the inspiration of the Holy Spirit. "For this cause, I bow my knees unto the Father of our Lord Jesus Christ, of whom the whole family in Heaven and earth is named". The whole family in Heaven, the whole family in the earth is named after the Almighty God, glory to God.

Now we know this is true. George, think about it. We lay hands. We're His hands. We're His legs. We're His eyes. He's not just centered in here. This is the heart of it all. When I walk up next to danger, He's right there. He's walking in me, amen. And I'm working on having sense enough to know and understand that when I speak, He's speaking in me, not just when I'm on this platform, but all the time, 24 hours a day. And my speech and my response to others is still, it is still not as love-responsive as it will be. Praise God. Just recently, I made advance decisions concerning this, to not respond sharply and then have to change my attitude. "What agreement hath the temple of God with idols? For you are the temple of the living God, as God hath said, 'I will dwell in them'".

And I have a wife that loves me, loves me unconditionally. And she had accepted the Lord a couple of weeks before, and you have to understand she was born and raised in a church that never mentioned anything about the new birth. Never said anything. She didn't know what the word "saved" meant. She never heard about being born again. But she was just sitting in an empty house on a rollaway bed because I fouled the whole place up. And I'm not goin' into that horror story any more. But hey, my mother sent me a Bible. It was layin' on this gorgeous, beautiful coffee table that I had made in high school shop class. You shoulda seen that stunning thing. It was awful. Anyway, that little Bible was lying there.

My mother had sent it. And she wrote a note to me, "Precious darling, Ken precious, seek ye first the Kingdom of God and all these things will be added to you". George, that one verse, that one witness from my mother, but see it took a person. Somebody had to write that in that Bible and send it to me. My mother's praying all the time. And Gloria just prayed this simple, simple, simple prayer. She said, "Well, I certainly need things. Lord, take my life and do something with it". He took her life and He has certainly done something with it. Hallelujah, praise God forevermore.

Now in this last moment, Abraham "considered not his own body now dead", but only that which God had promised. Anybody here this morning that's having any kind of problems in your body, don't consider those symptoms. Consider the One that is the Author and the Finisher of your faith. Consider the One that went to hell and paid the price so you could sit here this morning in the bright sunshine in the freest nation on the face of the earth, so that you could be born of the Lord Jesus Christ. Hallelujah. Glory to God, hallelujah. Thank You, Lord Jesus.

In the name of the Lord Jesus Christ of Nazareth, healing belongs to you. Say it, healing belongs to me. I receive my healing today. I receive it, Lord Jesus. I receive it. Your healing resides on the inside of me and I receive it to flow out of my spirit into my flesh. Glory to God. And should there be anyone in this congregation this morning that you have any doubt whatsoever in the slightest thought that if something happened to you right now and you left your body that you would be present with the Lord. Anyone at all that has the slightest idea of that.