Kenneth Copeland - Are You Walking by Faith or by Sight? 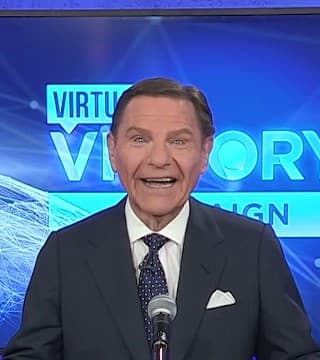 Father, in the Name of the Lord Jesus Christ, we thank you, and we praise you tonight, for the Word of the living God. And I step before this microphone tonight, behind this desk, to deliver this word tonight, to deliver it unto the anointing of God, to deliver it accurately. And I give you praise, and I give you thanksgiving for it. And I'm asking you, Sir, that the same anointing, all over this world, wherever this being heard, rest heavily, and that not one, not one person in the sound of my voice, leave this service tonight, for the power of the living almighty God. And we gave you the praise, and the honor and the glory for it, in the Name of Jesus.

I want you to notice that 27th verse, mark it in your Bible, if you haven't already. So God, now in the Hebrew text, El is God singular. But in this case, Elohim, God plural. That's the reason he said, "Let us". Jesus is involved in this. The Holy Spirit is involved in this, and God the Father is involved in this, amen. He created mankind in his own image. Say created. Come on, create. He did what? He created. He created. Tonight, and throughout this Sacramento meeting, we're gonna be talking about the key point, the key issue to all of redemption. Without a revelation of what we're going to be studying tonight, without consciousness of it, without being continually conscious of the fact, you're just really rather helpless.

Chapter 5 of 2 Corinthians, now, remember God created humankind. He created them, us. He created Adam. And then created his wife, Isha. Her name became Eve, after the fall. Before that fall, Adam looked like God, sounded like God, had every attribute of God. When God created this man. He literally reproduced himself, created the heaven and the earth, fixed it all up for him. And he created and reproduced himself. Do you think that Adam was right with God? Oh yes, he was, yes he was. Absolutely right with him. Now he fell, and just fouled up everything. What's the first thing God did? He fixed it. He entered into covenant with him.

"Brother Copeland, I don't understand that". Oh yeah, you do, if you just stop and think about it a minute. He slew an animal. He came in there in his little fig leaf suit. Oh man, anyway. And God handmade clothes for his man, and his woman. Amen. Actually God's son and daughter. Now that was at the beginning. Throughout the next 6,000 plus years, from the beginning to now, that plan, God never changes, and that plan became the heavenly plan from here to now. That was what it was all about, was to get Adam back. I would ask you something, this came as a, I mean it just startled me, when the first time I heard the Lord say this to me, it shook me pretty good. And... I don't mean I heard an audible voice, of course not. But he, right in here, where if you listen, you hear him just as well as I can.

He said, "Kenneth, who is the biggest loser of all"? Well, I said, "Satan". "No", he said, "no", Huh? No? He said, "First, I lost an archangel. The most beautiful of all". Then he said, "I lost a lot of angels". Then he said, "I temporarily lost Adam. I lost my plan for the garden of Eden, to spread throughout this planet. And this, the pilot project to the universe". I said, "Well, I never looked at it like that before". He said, "I know, and neither has anybody else". But he said, "Who's the biggest winner"? I said, "You are". He said, "You're exactly right", he said, "because I never decided to fail". He said, "I'm not failure-conscious. I'm not conscious of that at all, because I have a plan".

Well now then, 2 Corinthians chapter 5, what a chapter, glory to God. Let's begin reading, you know, well the next verse, no, I don't want to read the whole chapter. Let's read from the 6th verse, 2 Corinthians 5:6, are you there? Therefore, we're always confident knowing that while we are at home in the body, we are absent from the Lord. For we walk by faith and not by sight. Are you walking by faith tonight? Are you walking by sight? I'm walking by faith. Amen. We are confident, I say, and willing rather to be absent from the body, and to be present with the Lord, wherefore we labor that whether we are present or absent, we may be accepted of him. How? By faith, amen.

Now let's go on over here, verse 17, here it is. He created, therefore if any man be in Christ, he's a new creature, a new creation. Shout amen already, glory be to God. He is a new creation. Listen, old things are passed away. Behold, all things are become new, and all things are of God, who has reconciled us to himself by Jesus Christ, and has given to us the ministry of reconciliation. Glory to God, like Brother Hagin used to say, "Barry, I done preached me happy already". Well, I've been on this for days now. I'm in days and days and days, this is just, yeah, I'm just kinda, I'm I'm kind of eat up with this, you know? Oh yeah, glory to God, hallelujah. Praise the Lord, yes, amen.

Now listen to this. We're talking about, you. Say this, "I am a spirit. I have a soul. Made up of my mind, my will, and my emotions. And I live in a body. So this is my body. This is my mind. Now my soul and my mind can live very well without my body. But my body can't live without me. Hallelujah. And I'm a new creature. I'm just as new a creation right now as Adam was. And because of my blood covenant with God, Jesus did all the hard part. Jesus suffered like no man before or no men ever, ever will, in hell itself, so that you don't have to go. And so that I don't have to go. Amen, he did all the hard stuff. And all was left was for you and for me to believe it, and receive it", and say it with your mouth, and pray your prayer. Instantaneously. That quick, again, that quick. You, not your body, not your mind, but you, a new creation.

"Well, you see, Brother Copeland, I'm just an old sinner, saved by grace". Well which are you? You an old sinner, or are you saved by grace? See, what is that? That is a, well it's, you know, it's kind of an old traditional saying. But what gives birth to that kind of thing? No consciousness at all of this, to know that God was in Christ, reconciling the world unto himself, not imputing, or not holding against them their trespasses, and has committed unto us the word of reconciliation. Now then we are ambassadors for Christ, as though God did beseech you by us. We pray you in Christ's stead, you be reconciled to God. For he hath made him to be sin for us, who knew no sin that we might be made the righteousness of God in him.

One more time. I am the righteousness of God in Christ Jesus. Now, I began preaching this 50 years ago. I learned it from Brother Hagin. And well, more than that, really 51, 52, well, I've been in this ministry 53 years, and it was about the middle of the second year. I don't know, but it's been a long time, you understand. It is the most understood subject in the Bible. Untaught... I'm talking about lovely people now, and I'm not judging anyone, you understand that? Who am I to judge? Are you kidding me? Somebody said, "What's your background, Kenneth"? I said, "Sin, sin".

You know, I was so ignorant of being a new creature, even after I got born again, I thought, I didn't know anything about being a new creature, I never heard that. But I, you know, I thought really I had sinned away my right to, you know, to preach or anything like that, because you know my goodness. No, I didn't know I was a new creature, I didn't know I'd been recreated. And so I want you to look here, and this 5th chapter of the book of Hebrews, verse 11, talking about called of God, talking about Jesus being called of God, a high priest, after the order of Melchizedek, of whom we have many things to say, and hard to be uttered because you're dull of hearing. What does that mean? You're not listening. It's just kinda hard to, you know, oh yeah, that Word of faith.

You know, I've heard that. Faith cometh by hearing, hearing by the, yeah, I know, I've heard that. No, you haven't heard, you hadn't heard anything. He's gonna preach on righteousness again, I heard this. Dear Lord, is that all he knows? Somebody asked Brother Hagin, "How long are you going to preach on Mark 11:23-24"? He said, "'Til you get it, and then we'll go on to something else". Amen, listen to this, for when for the time you ought to be teachers, or you should be teaching, by this time you should be teaching, but your dull of hearing, you're not listening. You have made that one teach you again, which be the first principles of the oracles of God, and are become such as have need of milk, and not strong meat.

Now you might say, "Well, you know, Brother Copeland, we just, we don't, we don't get into anything, very, we just preach the milk". Wonderful, but I doubt if you're preaching that, because your people are not growing. Scripture says desire the sincere milk of the Word, that you may grow thereby, amen. So, for every one that uses milk, are you listening to me now? Every one that uses milk is unskillful in the word of righteousness. You don't know who you are. People that are untaught don't know the difference between righteousness and holiness. "There, ain't no way you could be righteous. You ain't been believer but two years". I became the righteousness of God in two seconds. Holiness, that's a completely different thing. That is a totally different subject altogether. Holiness, if you think about it, holiness is really a manifestation of the fruit of the Spirit in your life.