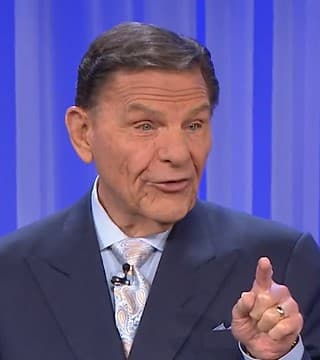 Today we're going to be talking about something that is dear to my heart and has been for many, many, many, many, many years. I began studying covenant a lot of years ago, almost, well, I would say I've been in this ministry 53 years, I would say at least 47, 48 years of that. And it's just been so big and real in me. And although you've heard me tell this story, but I'm going to tell it again. Back, oh, you know, this was long time ago. You can tell. Brandeth airways had, airlines had a shuttle service that left every, they staggered it. It was a shuttle from Fort Worth to Dallas, and to Houston, I think. Anyway, and you could just go out to the gate and hand them the money for the ticket and go get on it. And boy, those days are over forever, aren't they?

And so I had our airplane was in the shop or something. I don't remember what it was. But anyway, and on, I needed, I needed to go to, I was going to Houston and I said to Dallas, I didn't shuttle the Dallas. It was the Houston Bay. Well, nobody liked to sit up at the very front because there were no windows up there. So that's where I went. I like to be up there. I don't, you know, get people behind me. And if you can picture this, the airplane had a, the bulk of it up there was just carpeted for people to just put your feet up there on. Well wasn't anybody up there but me, someone had handed me E.W. Kenyon's book "The blood covenant".

Now it's published now larger than it was then. I hadn't, and it was just solid red and it wasn't over about that big. So I just stuck it in my pocket and I thought, I'm gonna read this on a way to Houston. So I started reading that little book. Jesus Christ of Nazareth is my blood brother it hit me. I want you to know it shot through me. As I sat there and the more I read that little book, I couldn't read over about a paragraph of it at a time, man, I'd kicked that. Oh man. I mean, like one fellow said, I'm just eat up with it, you know.

And here came the booze lady, you know, she got the cart full of booze. She walked up there and said, would you like... Oh no, you've had too much already. I guess my eyes were glazed or... Yeah, she would right, I was drunk but not on her spirit, my Spirit, the Holy Spirit. Glory to God. And that, that's when blood covenant really struck me. With such a force. And today we're going to talk about the very key, the hardest to translate, the most difficult to, uh, to have mental concept of Hebrew Chesed. Now you, if you see it written it, you can just pronounce it H E S E D. But if you see it written, it has a C in front of it, and it's Chesed. Am I right Professor? It's chesed.

So that's what we're going to look at today. And before we get through, you're going to be just as wild as I am this morning. So let's look at Matthew chapter 22 please. Matthew 22 verse 41, now be sure you mark these because this is a, this is a scriptural key to a number of people in the ministry of Jesus. "While the Pharisees were gathered together, Jesus asked them saying, what think ye of Christ? Whose son is he? They say unto him, the son of David". Now you've got that? The son of David. Now when you hear like Bartimaeus, like the Syrophoenician woman, we're going to look at that. But I just want to prepare you for it right now. And they said, son of David, you know, every time he got his attention, they called him Messiah. Come on, they called him Messiah. Whoa, praise God. Amen.

Now see that just particularly where we're going with this, it just kind of sails over just surface reading the Bible. You can't get anything out of just surface reading the Bible. You know, back in the back in the gold mining days, you could find a little gold dust out of a Creek or something like that. But the Mother load was under the ground. I mean you had to dig for it. Well, it's the same way with the Bible. We don't, we don't want to just be dusting across the surface. It takes time looking at it, opening your eyes to it. What I call going widescreen, and oh glory to God, I've read it thousands of times and one day, whoa. You ever been sitting next to somebody they say, 'wow, did you see that?' 'No, I didn't say nothing, what?' No, but both read the same verse.

Now then, now that we have that settled, let's go to the 23rd Psalm. We are living in the 23rd Psalm today. The 22nd Psalm is Jesus on the cross. It begins with my God, my God, why hast thou forsaken me? And if you look at it in the classic amplified translation, which is more correct, he said, it is finished. Now you know what he was saying on the cross. He was not shouting my God by God, why hast thou forsaken me? He locked in on that 22nd Psalm because he found himself there. He knew what was happening. He knew what was going on and he just locked into that song and I am convinced completely that that's what he, he just kept going on that Psalm. He just kept going on that Psalm. He just held onto it and held onto it. Right in hell itself. Glory to God. Thank you. Hallelujah.

I heard the Lord say to me one time, Kenneth, the shadow of a dog never bit anybody. Well, the shadow of covid-19 never bit anybody. We have victory over this thing. And let me say this to you, so what if you get it? So get healed. Amen. Do all the things you're supposed to do. Render unro Caesar what Caesar's. Render unto God what's God, but you take a stand against that disease and instead of moping around the house, you dance around the house. You go into bed and you rest a little while and why you're laying there in the bed just shout and glory! I have the victory, and this is the victory that overcome the world, even my faith. Glory be to God. I have victory over you, covid-19.

Now get! Hallelujah. For you are with me. Your rod and your staff, they comfort me. You prepare a table before me in the presence of mine enemies. You anoint my head with oil, my cup runneth over, surely goodness and mercy. You will see Chesed translated more as mercy than any other word in the English Bible. It's translated loving kindness, it's translated in a number of different ways. But mercy, son of David have mercy on me. Now, remember they did not have a New Testament. They were still in the first covenant. He was shouting, son of David, have chesed for me, Jesus said, send him here. Send him here. The Syrophoenician woman who had no covenant with God, persistent woman. She did three things. She shouted at him. Son of David, have Chesed on me.

Now, Jesus just kept bringing her on, just bringing her on. There's no way he could turn her down. Not when she called for Chesed. No way. She knew who he was when others didn't, wasn't even paying any attention. And then she fell on her face and she worshiped him. She was a woman out of her time. She had heard of Jesus. She listened. She'd heard of Chesed. Son of David, she said, do chesed for me. Alright, second Chronicles chapter 20, now we will begin to see here second Chronicles 20, we begin reading with the first verse, and read this very carefully.

"It came to pass after this also, that the children of Moab, and the children of Ammon, and with them other beside the Ammonites, came against Jehoshaphat to battle. Then there came some that told Jehoshaphat, saying, There cometh a great multitude against thee from beyond the sea on this side Syria; and, behold, they be in Hazazontamar, which is Engedi. And Jehoshaphat feared, and set himself to seek the Lord, and proclaimed a fast throughout all Judea".

Or excuse me, all Judah. "4 And Judah gathered themselves together, to ask help of the Lord: even out of all the cities of Judah they came to seek the Lord. And Jehoshaphat stood in the congregation of Judah and Jerusalem, in the house of the Lord, before the new court, And said, O Lord God of our fathers, art not thou God in heaven? and rulest not thou over all the kingdoms of the heathen? and in thine hand is there not power and might, so that none is able to withstand thee? Art not thou our God, who didst drive out the inhabitants of this land before thy people Israel, and gavest it to the seed of Abraham thy friend"...

Now in the book of James in the King James translation, for those of you that haven't already heard me talk about this, it was translated correctly. James was said that Abraham, now we're talking covenant here. Abraham was the friend of God and "Friend" was capitalized. Now that is a blood covenant term and since people are, particularly Western minded people are completely ignorant about ancient covenant practices. You know, all the rest of them said oh well, you know, they just messed it up and put a small F there. Well, it's wrong. So go back through your Bible and put a capital F on top of it.

Now it's big. It's big here. Jesus, right at the end, after the covenant meal, that last supper, he said, I no longer call you servantss, I call you friend. He just entered into covenant with them at that supper. Amen. He just entered into covenant with them. He held that cup. First, a folded, this is Passover meal, took out the top piece of unleavened bread, put it back, took out the center, put it back, took the bottom and put it back, which had always been Abraham, Isaac, and Jacob. But this time, doing the Passover ceremony, he went back and took out that center one and he said, this is my body broken for you. Eat it.

Now you know what we're doing when we take communion, when we take that and break it. Ah. Then he took that cup and he said, all of you drink from this. Now why would he, why would you say all of you drink? He had to have Judas drink that cup. Now remember, covenant friend, Jesus even entered into what would be known as the the SOP covenant, and he gave Judas his plate for Judas to sop from it. Two forms of covenant. Now, when Judas broke that covenant and entered into a covenant for 30 pieces of silver, the scripture says he covenanted with them. Now, here's what I want you to get. When he came out there that night and kissed him, Jesus called him friend. He'd already said that during the meal. Judas broke the covenant, Jesus never did. Isn't that good? Praise God.