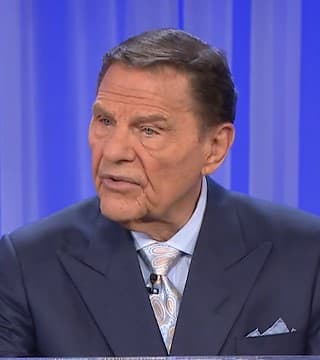 Now. Then second Samuel chapter 9. Oh Lord Jesus. Oh, this is why David, a man after God's own heart, verse 1. Saul has been killed. Jonathan has been killed. Now David and Jonathan had entered into a blood covenant and they loved one another even as their own soul. David said, is there yet any that is left of the house of Saul that I may show him Chesed for Jonathon's sake, what's working with him? This God covenant desire in him.

See, let me remind you of something else. When David and Jonathan entered into that covenant together... Greg, you remember the garment exchange and the covenant ceremony or the gift exchange indicating that all that I have belongs to you if you need it and all that you have belongs to me if I need it. And how can you tell the difference between a general and a Sergeant? By the coat they have on, the uniform they wear. Otherwise unless you know them, you can't tell the difference. That's covenant practice.

Now during the days of Stanley Livingston in Africa when they were looking for entrance into the continent of Africa and their helpers told him, said, you'll never get in there until you cut the covenant, and then they learned the first act was they found out that this King would cut covenant with them. Now, his uniform was a large spear and it had copper windings around that spear that was his rank. It showed that he was King. When Mr. Stanley entered into covenant his second and the King's second dropped a drop each one of us blood into a cup and they drank it. And then they went through the ceremony and all that and now they're blood brothers.

That King gave him that spear. He thought he'd been taken, cause he had stomach ulcers and he had a little goat and drank that goat's milk. But that's what that King wanted. He wanted that goat in exchange for that spear. From then on, wherever Mr. Stanley went, he walked into a village, they all bowed down before him and treated him as King because he had the King's rank.

Can you see it? We wear Jesus' robe of righteousness. That's shouting ground, is it not? Now Jonathan the Prince, he's in line to be King. The Prince put his robe, his princely robe on David took his armor off and put his armor on David, and they had entered into a blood covenant together. This is the biggest thing in David's life. It is huge. Wow. Listen, is there yet any that's left in the house of Saul that I may show him Chesed for Jonathan's sake? What's it doing? It's driving him to give. He's in covenant and his covenant brother's been killed, and Saul is dead, and it's just eating inside of him. But God so loved the world that he gave his only begotten son. He did Chesed on this world. His mercy endures forever.

Oh Lord. What about somebody that is in such a mental condition, they can't even pray for themselves? Ah, I don't know. What do you do it's a loved one. You just put a smile on your face and you just lay hands on them. Hug 'em up and say, son of David have mercy. I'm calling for my covenant Chesed with you, hallelujah. Chesed, I'm calling for chesed, sir, I need it today. Thank you. I thank you for it. And I praise you for it in the name of Jesus. Oh, glory. Let's worship him. Oh, lets worship him.

I remember back when I first got born again and I'm uh, you know, I thought I didn't know I was a new creature and have any idea. And I found two verses not at right at the same time, but short span of each other. One of them said that Christ died for the ungodly, and I thought, boy, I qualified for that. Well so does everybody else. And then I found that the verses were talking about his mercy endures forever. I didn't know what it meant chesed. I wouldn't have known what it chesed was if you said it to me. He said, what? No chesed. Oh, I've never heard of. All I knew was mercy. His mercy endures forever. And I thought, Oh glory to God, Whoa. I really need to hear that. Amen. Thank you Jesus.

Now we're not done yet. And there was in the house of Saul, a servant whose name was Ziba. When they had called him unto David, the King said unto him, are thous Ziba? He said, thy servant is he. And the King said, is there not yet any of the house of Saul that I may show Chesed of God to him? Ziba said to the King Jonathan, yet he has had yet had yet a son, which is laying on his feet. The King said unto him, where is he? Ziba said he's in a house of Machir the son of Ammiel, in Lo Debar. And when the King sent and fetched him out of the house of Machir the son of Ammiel from Lo Debar.

Now I really don't think since he's showing Chesed on this young man, I don't think he sent, you know, just a couple of guys down there and you know, just run down there and get the... no, he's King, man. I think he sent a troop down there to get him. The little guy can't walk. I see him on sticks. His nanny dropped him when he was a baby, couldn't walk. I think he sent, I mean, I think they had flags on horses. Amen. And finish that thing off. Oh no. It's going to be just like they said, they told me he's going to eat me for lunch and that's what he's gonna do. He gonna take, I'm the last one left and he'd going to wipe out a whole bunch of us. Oh man, what's going to happen to me? What are we going to do?

Now, When Mephibosheth had the son of Jonathan, the son of Saul came unto David fell on his face and did reverence and David said, Mephibosheth, and he answered, behold, thy servant. David said unto him, fear not. I will surely show the, I will surely show thee Chesed for Jonathan thy Father's sake. I will restore thee all the land of Saul, thy father, and you shall eat bread at my table continually. Did you get it? Did you get it? You're going to eat at the table with the King continually. You're not a poor crippled kid anymore. Oh, you're the son of the King. Glory be to God forevermore. And he bowed himself and said, what is thy servant that I should look upon such a dead dog as I am.

You know, David didn't even paying attention to that. He called aside Saul's servant and said unto him, I have given under thy master's son all that pertained to Saul and all his house. He walked out of there richer than any of those other people. He not only owned all the Saul's, he owned all of Jonathan's land. He this, this, this young man in a moment's notice because of his Chesed and because of his covenant with the King, glory to God in a day's time he became rich. And once again, once again, like his father Jonathan, once again, this young man is Prince of the realm. Cause David put his robe on him and set him at his table and now he's eating out of golden plates.

Oh wait a minute. Wait a minute. Wait a minute. Then said, Verse 11, then said, Ziba unto the King. According to all that the Lord the King had commanded his servant, so shall thy servant be. As for Mephibosheth said the King, he shall eat at my table as one of the King's sons. We are seated, raised up together, seated in heavenly places on the throne of grace because of God's chesed for us. Jesus at his right hand and we are at the right hand of Jesus sitting in that same place of authority. And the day is coming and I believe very soon all this thing we'll wrap up, and chesed will truly be acted out in our presence, and we'll see as he really is.

Verse 6, to him that stretched out the earth above the waters for his chesed. Endures forever to him that made great lights for his chesed endures forever. The sun to rule by day, he created this planet because of his chesed. He wanted, He's created, He wants to give this thing to somebody. He's already, he already has everything he needs. He's got a whole universe out there and he created it all for one man and his wife. His chesed, his desire, overwhelming desire to give. That's what grace is. I said, that's what grace is. God's over whelming desire to treat you, to treat me, to treat all of us with chesed. To treat all of us like sin never happened. Praise God. Thank you Jesus. Whoa, glory be to God. Thank you Lord Jesus.

They are saying that this covid-19, that the affects of it on this nation will take 18 months to overcome it. Not of the disease itself, but the effect on the economy and so forth. I don't believe that. I mean that's the general consensus, but I don't believe that. We have the chesed of God. We have Jehovah Jireh, Jehovah Jireh, the one who supplies. Our Jehovah Jireh supplies all of our needs according to his riches in glory by the anointing of Jesus. That's a good place to shout right there. That just isn't to us individually. Of course, it's for us individually, but we're a nation that was organized for one purpose because we love the Lord Jesus Christ and it was set up in order to freely worship him, and he will never ever forget that. I said he'll never forget it.