Kenneth Copeland - Chesed Is The Faithfulness Of God 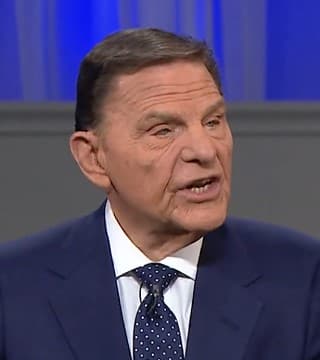 Let's look at Matthew chapter 15. Do you remember the Syrophoenician woman? All right. Now this is a woman with no covenant and she knew it. Well. You know, brother Copeland, she probably had never heard about Jesus and, and uh, well, I beg your pudding. Let's see what she said. So, we'll go to the 15th chapter and the 22nd verse. Now you remember, she's the one that gets kept hounding everybody over her daughter and wouldn't give up. Wouldn't quit. Don't care what you called her. It doesn't matter she's going to get something for her baby. And behold, a woman of Canaan came out of the same coasts and cried unto him saying... are you ready? Are you ready? Have mercy on me, son of David.

Don't tell me she didn't know anything about it. Don't tell me she'd never heard of it. She believed with everything she had. He's the anointed one. He's the one to come. How'd she find that out. I don't know. Well boy, he's saying the right words. And she, she worshiped him. She fell down before him and called him Lord. Now let's, let's go down here. Verse 25 she came and worshiped him saying, Lord, help me. He answered and said, it's not right to take the children's bread and cast it to the dogs. And she said, truth, Lord. Yet the dogs eat of the crumbs which fall from their master's table.

When Jesus heard her, answered and said unto her, Oh, woman, great is your faith. Be it unto thee even as you will. And her daughter was made whole from that from that very hour. She laid hold of covenant chesed and didn't even have a covenant She couldn't get a covenant for a few more months. 'Till after Jesus rose from the dead. Covenant Chesed. God's overwhelming desire to be God to all who will allow him to be. Can you see it? Oh, isn't that good Greg? Word.

Kenneth Copeland: I can just see him. Come on girl. Come on girl. You got it in you. Come on. Come on girl. Give me, give it to me. And she said, Son of David. He said, you're on the right track. You know have mercy! Oh, you said it! You done said the right word. Hallelujah. You call for chesed. I don't care if you're a few months ahead of time. Amen. Now let's take a look here. Mark chapter 10. What were, excuse me please. What we're seeing, we, we have a tendency, because we're looking back at all this, we have a tendency to look at those things through our eyes instead of the eyes of history, instead of the eyes of the Bible. There was only one covenant in existence. The covenant with Abraham, Isaac, Jacob, that's all one end of them doing anything about it. That's right. And evidently that, that... obviously she'd heard of it.

Now this is just me talking, but I think she was so desperate for that girl. She began to search and research and dig and find and everything she could find out. Ask every question she could ask and somebody told her, the Messiah is here. If you can get down there, he'll take care of Her. Amen. And she said, who's Messiah? And I said, well, all right, now listen to this. And gave her scriptures. She knew. She knew who he was. She knew she needed Chesed. She's going to get it one way or the other. Thank you Jesus. Now then let's look at Bartimaeus. Don't call him blind Bartimaeus. He's not Blind anymore. He just Bartimaeus.

Now Mark chapter 10:46 they came to Jericho and as he went out of Jericho with his disciples and a great number of people, blind Bartimaeus son of Timaeus sat by the highway side begging. Now this is a man of faith. He already was a man of faith. We don't have any idea how he became blind, but he was legally blind. And he was... He had a legal right to beg. He'd been, he had been examined by the priests. We can prove that right here. When he heard that it was Jesus of Nazareth, he began to cry out and say, Jesus thou son of God, how have Chesed on me.

Many charged him that he should hold his peace, but he cried out. The more the great deal thou son of David. Have chesed on me, and Jesus stood still. Somebody called him Messiah and call for Chesed and he stood still. Glory to God. Commanded him to be calm. And they called the blind man saying unto him, be of good comfort. Rise! He calleth thee. And he casting away his garment. That garment that he wore was his licensed to beg. He had been examined by the priest. He was declared a blind man and had every right to beg. He could beg anywhere he wanted to because he was a blind man and they had mercy on blind men.

Wearing that coat, declared him legally blind. He got up, sloughed that coat off and went hunting Jesus. Somebody ought to say, amen. Jesus answered and said unto him, What will thou that I should do unto thee? The blind man said unto him, Lord, that I might receive my sight. Jesus said, go your way. Your faith has made you whole. And immediately he received his sight and joined the team. What did Jesus use? Chesed. Covenant chesed. Oh, we begin to see what it is, right?

Hebrews chapter four, excuse me, 4:16. 15th verse . For we have not a high priest which cannot be touched with the feeling of our infirmities, but was in all points tempted like as we are yet without sin. Let us therefore come boldly unto the throne of grace that we might obtain Chesed. It belongs to us. We're family. Now, keep this in mind. You come boldly to the throne. Now wait a minute. Um, I'm about to get on my knees here. I'm want to get on my knees. No. Chesed should you come up here. Chesed is following me all the days of my life. Come on chesed. Why should I fear anything? Why should I be afraid of anything that moves, breathes on the face of God's planet. I have the all mighty God, the God who's more than enough. The great God of Chesed hallelujah is following me all the days of my life. What do you think professor? Whoo. Glory be to Jesus.

Come on. Just go ahead and go ahead and have a shout. Praise God. Hallelujah. It is the key issue to faith. Faith cometh... There there, there is no question about whether faith comes or not. It can't help it. Faith comes by hearing and hearing by the word of God, the word of God's pregnant with faith. And as you hear it and read it and hear it taught and preached, faith cometh. Yes, But faith doesn't come to the high degree that it should. It's already in you. That's what, that's what got you born again was faith. Second chapter of the book of Ephesians explains that. You believed it in your heart and said it with your mouth. But the big question is how come all those miracles back there and we don't see them? Because of things like we're talking about here this morning. Not knowing what belongs to us and those of us that know a little, I don't know any more than that. But I'm learning and you're looking at the hungriest man on his planet for God, man. The more I know the more I realize how much I don't know. Glory to God. Thank you Lord Jesus. Hallelujah.

And I got to get it quick as I can. I'm only got 37 more years ago. But now say that to me again, Lord. Chesed... Say it again. It's very difficult to say sometimes. That Chesed force. The hesed of God. Covenant Chesed. Loyalty. Covenant loyalty. Yeah, Covenant faithfulness. He is faithful to that promise. Amen. Thank you, Jesus. We do not have chesed because we need it. We have Chesed because God can't do without it. Second Samuel nine. Read verse three.

The king said is there not any of the house of Saul that I may yet show Chesed of God unto him? What was happening to him? God so loved the world that he gave, he's in covenant with the whole world. He gave Chesed is roaring on the inside of him. He's got to show chesed to somebody. He's got, he's got to show Chesed to somebody. It's driving him and driving him to give. And it's driving David. There's blood between he and Jonathan and Jonathan has gone on. Yes. Is there nobody left unto whom I can show Chesed of God? They said, well, yeah, there's this little cripple boy down there... Go get him now. That's Chesed.

And when you're sick in bed and you're crying out to God, God has said, come on, come on. Come on. Call for my mercy. Call for my Chesed. I'm standing here waiting on you. Call on me. I am the son of David. I am your healer. I am your covenant brother. Give me something to work with. Give me some Chesed. Give me a chance. Let me in there. Well, I'm going to go be operated on. Well, let me in the operation room. I'll clean up the whole place. I'll do you Chesed anywhere I can find you. Have mercy on me, Jesus. Okay! Well, I don't know if it's his will to heal me. Well, shut up until you find out.

I said this years ago. See I was scripturally illiterate. Thank God. T.L. Osborne told me. He said, Kenneth, you are blessed man. He said, you're born free, Brother. Said you didn't have anything to unlearn. Somebody said, what's your background? I said, sin, That's it. Thank God for my mama. I tried to go to hell. She wouldn't let me go. Anyway, 10th chapter, second verse. David said, I will show Chesed to Hanun, the son of Nahash. I'll show Chesed. I'm faithful to my covenant with God. Who made David King, huh? No, Goliath. What did he say?

I'm totally convinced when that lion came in there and when that bear came in there, I'm totally convinced he had Samson on his mind and the power of the Holy ghost came on that teenage boy and he killed him with his bare hands, ripped them apart just like Sampson did. And he comes from an Orthodox home. He knew about Sampson. He knew the covenant. And he's less than 20 years old, cause if he had been 20 he would have had been in the army. He comes down there and he hears this giant twice a day for six weeks. This guy had been doing this.