Kenneth Copeland - Who Is Jesus? 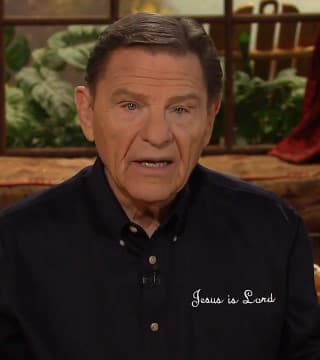 Thank you Father for today's broadcast. We just give you praise and thanksgiving that we're covenant people and we thank you for your mercy and your goodness and your kindness, for revealing to us the covenants of blood. That first one and the second one. In your blood, in your Holy blood it was shed. And that day, that day, the moment you were raised from the dead, that very, very day Satan lost all of his power, lost his place. And we thank you for it in Jesus name.

Oh, he's still the god of this world, but he's not my god. Now I want to say this to you before we go in, into this. Uh, next week we're going to be talking about, we talked about who is God, and today we're gonna, um, pretty well introduce next week on who is Jesus. So remember now beginning with the 13th chapter of John. Look at verse five. After that, he poured water into a basin. Now where were they? Last supper, right? 13, 14, 15, 16, 17th chapters were all in that one room. This was a covenant meal. He said this as often as you do this, you do it in remembrance of me, this is my body broken for you. This is my blood of the new covenant.

All of you drink of it. All of a sudden this gets to be big, doesn't it? It is big. It's the biggest thing that's ever happened in heaven and earth. Amen. And the 14th chapter, Oh, I tell ya, that 14th chapter, "Let not your heart be troubled". Now remember we're in this place together here they're having meal together. Jesus, the rabbi. Three pieces of unleavened bread wrapped according to Jewish covenant teaching, one piece folded, second piece folded, third piece. Abraham, Isaac, and Jacob. There's a lot of, there's not one little piece of this that doesn't mean something. It wasn't a little wafer about this big, what we're doing with that represents it. But it just, well, once you know what happened here, this, all of this is the reason that Gentile people, particularly Western minded Gentile people, 2000 years removed, just don't get it.

That original covenant with Abraham brought about, and we talked about yesterday, Stanley and Livingstone and so forth, getting into interior of Africa. And all of it came out of this. This was the first of its kind ever. Like I said, I got the biggest part of this, that the base for it some years ago out of E.W Kenyon's book, "The blood covenant", three reasons for men cutting the covenant. A strong tribe lives by the side of a weaker tribe and so forth, and second two businessmen and so forth. Two men wished t o cut the covenant. They come together with their friends and a priest, friends and a priest. First they exchange gifts by this exchange of gifts they indicate that they'll be one that all that one owns the other owns if necessary. Did you get that?

All right, now then an incision is made. You've got one cup, each one drops a drop of blood in that and then it's mixed and then you drink of that. Now your blood covenant, blood family. Now, let not your heart be troubled, you believe in God believe also in me. Now he comes down in this, 21st verse, he that has my commandments. He's not talking about the 10, there are far more commandments than just ten. He that has my commands. We're in the same place. Now remember what I read there from, from Dr. Kenyon? That first they exchange gifts by this exchange of gifts they indicate that all that one has the other owns if necessary. All that one has the other owns. This blood covenant now.

The 16th chapter of John. I'm telling you now this is shouting ground. Is there a seat belt on those chairs? How much time do I got, Tim? Well, that's perfect. 16th chapter, verse 13, how be it when he, the Spirit of truth is come. He will guide you into all truth. Listen now, he shall not speak of himself, but whatsoever he shall hear, what so ever. Say whatsoever. In fact, just quote this with me. Whatsoever he shall hear that shall he speak and he will show you things to come. He'll glorify me for he shall receive... you gotta say this one too. He shall glorify me. In your imagination, He's got that cup in his hand. He shall glorify me. Here it is. He shall receive of mine and show it on to you.

All things that the father has are mine. Therefore said I, he'll take a mine and show it to you. Everything the father has is yours if you need it. Everything He knows everything he has. My God, my God, my God, my God and the priests of the covenant is officiating it right now. At that moment they knew some things about covenant, but this is way over above their heads. Oh, it should never be over our heads. What do we have? What do we have that they didn't even have at that time. May I demonstrate?

Oh father. Thank you sir, I know you understand that and I believe you'll give me the interpretation of it and I'm happy about it now. Hey, do you know what you said? I don't, that's what is so good about it. I'm building myself on my most Holy faith cause I can't get my mind in it. This happened to me. I'm talking about days ago. I'm praying about something. I did not know how to pray it. And I go, well, I don't know how to do that. So I just, I said, okay, I'll tell you what. And, and I, I've got this on my mind and uh, see this is why reading is so important to know this New Testament. Although when I, you know, yeah.

In the book of James, you promised me this. You, you said any man lacks wisdom. He falls in different tests, temptations, and trials. Um, any man that lacks wisdom, let him ask about God. Look at this liberally, to all men upbraideth not or in other words it doesn't hold false against him. Let him ask in faith nothing wavering. And I thought, well, yeah, absolutely. Because you said in your Word, 1st Corinthians 1:30, that Jesus is made unto us wisdom, righteousness, and sanctification. That's well out of the mouth of two witnesses that settled it right there my covenants in place, and I believe it.

Well, let's fast for two weeks. Let's fast two weeks. Nothing wrong with fasting. Praise God. I went along for, Oh, what was it, Lord? I don't know, three or four days. And I started praying about this situation in a, in a way that I hadn't thought of and I though that is really good and it, and I thought that's what I prayed. It just flows so easily that, and it's just there. Cause he's here and, and, and I, and I, when I ask him, I don't wonder about it. It's mine. It's covenant. I have it now. Amen, but I expect it, I expect it. Do you think Jesus ever walked along the shores and says, boy this guy's been dead four days. I'm going to have to pray a strong prayer here. No, he didn't demonstrate a lack of faith or need of faith. He just faith, listen to it.

Now you know why and how he said, right, it's right here. The 10th verse of the 14th chapter, we're talking about who Jesus is now. Believes now not that I'm in the father and the father in me, the words that I speak unto you, I speak not of myself, but the father that dwells within me, He does the work. I only say what I hear my father say, I only do what I see my father. Now, the only thing that ever really bothered him and hurt him to the point of killing him, was the separation between he and his father.

Now wait a minute, Abraham, the friend, the covenant friend of God, the friend that sticks closer than a brother had an only son and God demanded of his covenant brother to offer him as a sacrifice. People struggle with that. There's no struggle there. In the book of Hebrews, it says in the 11th chapter he received that boy raised from the dead in a figure. Well, people say, Oh, don't you know it hurt him? I don't think he hurt him in the least. He fully intended to stick him and burning and watch God raise him from the dead cause he considered not his own feelings. He had blood of God almighty, the El Shaddai God, and he called things that be not as though they were and they happened, considered not his own body now dead, neither the deadness of his wife's womb, and it worked.

Now I'll tell you something that you don't ever hear anybody preach much. The 25th chapter of the book of Genesis, what about that? Sarah died. Abraham remarried and had six more sons and lived to be 175 years old, that's God. Somebody ought to shout Amen in this studio. That assurance put a grin on his face, but he said that's all right son. That's all right, me and the boy will be back down here and everything gonna be alright. Covenant my brother and sister. He knew. He considered not anything except what his covenant friend said and did. Glory be to God. But it had to take place. That had to be, that had because there wa s coming a time and God, the father knew it, that he wouldn't be able, that God wouldn't be able to do it. He couldn't do it. He couldn't turn his back on him. He couldn't curse him. He couldn't separate himself from him. It's how a had to do it. His covenant brother had to do it and he had to try him and he did. And it held that blood covenant held strong.

Oh, glory be to God. Hallelujah. And Abraham raised that knife, that angel said, hold it, hold everything. Hey. And the father said, all right, that did it. Now, I can't withhold my son. I have to go through with the plan. I have to do this. I have to do it. It's now upon me, my covenant man that's willing to kill the only son he had and now I have to do it. Well, Jesus, my brother and sister, Jesus was there. He's witnessed all this. He knew it's coming. He knew it was coming, but when it came, it was rough. He almost died with it. Sweating blood. Just-he almost died with it, pressed him until he says, it's almost killed me, almost killed me.

Nevertheless. Oh, how this has been kicked out... Nevertheless, my covenant father, nevertheless, nevertheless, your will be done. And hanging on that cross, He locked into the 22nd Psalm, which begins, God, why hast thou forsaken me? And ends with it is finished. King James doesn't, but the Greek does. The Abrahamic covenant was finished. Redemption wasn't finished. He had to go to hell to finish that. We're out of time.